I love comparative studies: finding the fundamental similarities between things which appear substantially different. And my "trip" down the rabbit hole of superfoods has been no different. As referenced in Scaffolding, Food and Wine recently released an article which discussed the release of Gwyneth Paltrow's smoothie recipe. And while the hub-bub surrounded the price it would set one back to purchase the superfoods used (expensive for a mere mortal, pocket change for Paltrow) I found it odd that many of the ingredients repeat in either their usage or function.


Down the rabbit hole we go...

As stated in Tea Timing, Continued..., I've somehow found myself in the world of superfoods. The journey down the "rabbit hole" came with my perpetual window shopping on the Net-A-Porter site where I stumbled upon a curious concoction entitled "Sex Dust" put out by a company known as Moon Juice. Formerly familiar with Moon Juice from Into the Gloss (my first step down the rabbit hole), I began visiting the brand's site and essentially window shopping as I did at Net-A-Porter (both sites carry goods which will set you back a pretty penny). And having visited Amanda Chantal Bacon's site (read: Moon Juice), I was curious when I re-visited the recipe for Ms. Paltrow's smoothie.

Aside from a base of almond milk, almond butter and coconut oil (two-thirds of which you can make at home), Paltrow's recipe dabbles in the realm of superfoods, calling for ingredients such as maca, ashwagandah, ho shu wu and cordyceps. But such ingredients seem to repeat within the recipe. In addition to the ingredients listed above, Paltrow also claims to use Moon Juice's Action Dust, Brain Dust, Sex Dust, Beauty Dust, Good Night Dust and/or Spirit Dust, "depending on what the day ahead holds." But, having read up a little on such dusts prior to reading Paltrow's recipe, I noticed many of these mixtures were made up of the superfoods themselves (i.e. Brain Dust and Sex Dust contain maca, etc.). But such ingredients don't only repeat in form, they repeat in function as well.

When getting into superfoods, I was intrigued by the there were some that claimed to help with stress. While I'm lucky enough to not need digestive aids or energy boosts (alternate areas helped by superfoods) I'm constantly on the lookout for products which can reduce stress without having me make difficult life choices. And through my research on superfoods (and some luck), I happened by a small ingredient called an adaptogen. 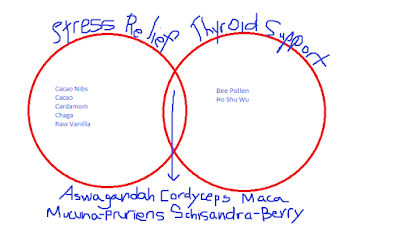 Technically speaking, "adaptogen" is a classification of ingredients that, among other things, can help to balance the effects of stress or, as Merriam-Webster would say, "a nontoxic substance... that is held to increase the body's ability to resist the damaging effects of stress and promote and restore normal physiological functioning." And the Moon Juice website offers a host of adaptogens, one being Vanilla Mushroom Protein, better known as the fourth ingredient in Ms. Paltrow's smoothie. But such powder is not the only one to protect or defend against stress... Ms. Paltrow puts a myriad of others in as well.

While $200 (the amount it would cost to buy the ingredients of Ms. Paltrow's smoothie) may be pocket change for its creator, the though of spending that on a drink (which is not a fine wine) may send most into a stressful frenzy. This is perhaps why so many of its ingredients are claimed to combat stress. While Vanilla Mushroom Powder serves as an adaptogen, ingredients such as maca, ashwagandah and cordyceps are also classified under the Moon Juice banners of both "Stress Relief" and "Thyroid and Adrenal Support". Furthermore, if you care to add Goodnight or Spirit Dust to your concoction, you would be adding other, stress-reducing ingredients as well. So the point is, while most of the above ingredients have unique properties in and of themselves, it doesn't mean one has to spend an exorbitant amount in order to receive a few benefits. One can tailor the ingredients to their tastes and budget... something we can all raise a glass to.

*Note: Above, I have linked ingredients to either the Sun Potion or Moon Juice websites in order to provide a variety of options and slight changes in price points.

Email ThisBlogThis!Share to TwitterShare to FacebookShare to Pinterest
Labels: Adaptogen