As you may have noted lately, a number of sites which may pop up on your Facebook feed offer quizzes on virtually every subject imaginable. What Kind Of Milkshake Are You? (vanilla, of course), Are You Type A Or Type B? (we'll get to that later) and Which "Saved By The Bell" Character Would Be Your BFF Based On Your Favorite Number? (see below) are just some of the quizzes you can find on the BuzzFeed site alone. But what strikes me as odd is I have yet to see any quiz offering guidance as to what one's spirit animal may be, especially because many sites which host such quizzes have seemingly been in love with the term "spirit animal", claiming Anna Kendrick or another trendy, sub-par actress to be theirs (I carry an odd vendetta against Anna Kendrick, probably because she's my spirit animal). But here, "spirit animal" refers to actual animals (or categories thereof) whose traits may be reflected in our own behaviors and, especially, eating habits.

Several weeks ago, we were working in class to distinguish animals based upon their "actions" as omnivores, carnivores or herbivores. And, while I knew the definition of each category, I was unaware that each 'label' came with its own set of specialized behaviors within the animal kingdom. Viewing a movie on the subject, I (er, my students) learned that herbivores often, as prey, are built to be swift runners and voracious eaters while carnivores (or the alphas of the food chain) often eat less but more nutritionally dense meals. Quite a discovery in my mind, not only because I was unaware of such information before but because I noticed such tendencies inherent in humans, depending on their primary predilection for either vegetables or meat.

There are all different types of eaters. There are those who prefer meat, those who prefer veggies and there are those who prefer carbs... they're called kids. And as a Buddhist's kid, I've been somewhat imbued with the concept of reincarnation or what, in my mind, amounts to the continuation of energy over time (perhaps I was a narcissistic herbivore in a past life). However, all kidding aside, there seems to be some correlation between animals that are prey (read: herBivores) and the betas among us and those that are predators (i.e. cArnivores) and the alphas we see.

While BuzzFeed claimed me to have a Type A personality, I know in my heart I'm a beta. I deplore telling other people what to do, making solid decisions and/or possibly offending others in any way (you can probably guess my political affiliation). And to some extent, I've felt like "prey" for most of my life, at the mercy of others' emotional whims because I, historically, have been too afraid of confrontation (something I seem to be awkwardly overcompensating for in adulthood). But I appreciate the alphas among us... without them I'd be pretty directionless (without anyone giving me directions). And as someone who shares similar eating habits to the herbivores of the animal kingdom, there are several other similarities which exist besides simply being a "beta" or prey.

According to the BBC, herbivores or animals that serve as prey are, "built for speed," giving them somewhat of an evolutionary advantage over their predatory counterparts. The gazelle, the zebra and the antelope are all swift on their feet, much like I was when I ran cross country in high school. They are also always hungry, I trait which also dates back to my school days. Rather than eat one large meal at a time (as carnivores often do) herbivores often graze, taking small meals throughout the day. When I was in high school and began having some control over my own eating habits (basically, I could drive myself to Subway) I noticed this pattern of grazing naturally occur, even when my mom claimed it was bad for my teeth. So, as I watched the aforementioned film, I felt squarely at home within the herbivore classification... however, for every yin, there is a yang. 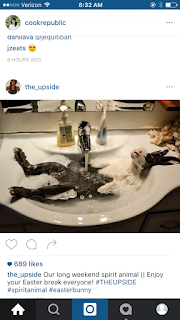 They always say we want what we can't have and while I've found the act of grazing conducive to both my lifestyle and budget, there are those who are content to eat a single meal in a single setting, much like a carnivore would. According to the video, Predator and Prey in an Ecosystem, "large predators need to eat less frequently than other animals because their bodies use up energy at a much slower rate." With the act of hunting being somewhat unpredictable (remember, those herbivores can be fast), carnivores often feast when attaining a kill and store such calories until the next one is made. In my own life I have witnessed this phenomenon. My fiance is more of a meat-eater. Despite his own claims, he is also more of an alpha, telling people to pound sand in an instant when I simply struggle to admit I disagree with someone's opinion. And, as a meat eater, he is able to eat a meal, finish it and wait contently for the next one. I, however, want to get a drink, a cupcake... ANYTHING between breakfast and lunch or lunch and dinner (or after dinner). My fiance will always look at me quizzically though and claim, "I'm not hungry."

This is where the jealousy comes in. Whereas I can stuff my face all day, those that can wait between meals seem to have a greater sense of self-control, in my mind. They can eat, then stop, then eat, then stop rather than eat, then eat, then eat, then eat. But perhaps, our spirit animals are the ones to blame: those years of consciousness and energy which make us what we are today. And as things come full circle, perhaps the herbivores are destined to be consumed by the carnivore which, as Mufasa says, "... become the grass and the [herbivores] eat the grass and so, we are all connected in the great circle of life." Except for Anna Kendrick. I want no connection to Anna Kendrick.