Of all the things I'm unsatisfied with in regards to myself, my appearance has been one of those things I've been okay with. In, regards to my appearance, however, my hair has always given me problems. Recently, I got my hair cut which has forced me to do something with it. But for awhile, I kept it back, hiding from the world its frizzy nature. Now, this could be a post about how I came to grips with my hair's wild, wavy ways rather than consistently straighten it into submission... but this is not one of those posts. Instead, I've found something rather unexpected which perhaps may have not relaxed the wave of my hair but has at least reduced its frizz... my eating habits.

In Seventeen Magazine long ago, I once read (between a multitude of ads for hair care products) that what we ate didn't necessarily affect the appearance of our skin and/or the texture of our hair. Of course, looking back... why would such a magazine go against the beauty or food industry that purchased their ads (paying subscribers? pshhhhh). For them, eating Doritos did not sully the sheen of your hair but Pantene could make it bouncier. Perhaps, however, I'm taking liberties here and the science really does conclude that what we eat doesn't affect (directly) how our hair grows but I've found in my experience that eating healthier has brought about a change in both my hair and skin for the better.

When I was young and lived in a small town, I ate a lot of sugar. Not just the sugar hidden in dressings, soups and processed foods but the unfiltered hit of sugar delivered with the taste of a cupcake, candy bar or ice cream. Of course, reliance on a substance can be found in the suburban small towns in America and for me, it, very sadly, was sugar. But looking back, this was a great time of life. It wasn't an "old me" that needed to be reformed, it's what I used to do before I tired of it and moved onto a new stage of life. It's not however, a diet I would suggest for most people. While I was a "happy" camper with my ice cream, it did place a cap on my happiness, doing a number on my hormones and making my hair and skin more haywire than it had to be. Of course, this was all learned after the fact.

When my diet changed towards a more natural foundation, there were several foods I began to consume more and many I began to consume less. While (added) sugars were swept off the table completely for a period of time, my reliance on bananas, nuts and beef jerky (read: anything you could pick up easily at a gas station) increased heavily. While I noticed such elements had an effect on my mood, I also noticed their beneficial effects on my hair and skin.

As hair is primarily made of protein, it's logical to conclude that an increased amount of protein in one's diet can lead to a greater sheen and fullness in one's locks. In particular, two foods stand out as supremely beneficial for their delivery of omega-3's, vitamin E, zinc and/or biotin into one's system. While there are many foods that can help (and harm) the hair, nuts and eggs stand out as two of nature's top players. Below are a several reasons (and recipes) on how such goods are good for your locks. Enjoy!

Nuts: I've never been a big fan a peanuts but tree nuts are something I can get behind. While the ancient somethings thought that brain-shaped walnuts could make you smarter, we're now advanced enough to know that such nuts, loaded with vitamin E and omega-3's, can not only boost cognitive functioning and,"[slow] the progression of Alzheimer's," (basically the opposite of sugary foods) it can also help what's on the outside of our heads. According to the BBC, since omega-3's are, "important fats our body cannot make itself... [consuming them can] provide oils that keep your hair and scalp hydrated."

Walnut Milk: Fresh from the Moon Juice Cookbook, walnut milk is one of my favorite ways to consume the legume. Using the simple ingredients of walnuts and water (and any added sweeteners one likes), the milk can be made from blending the such elements and straining them through a cheese cloth. Henceforth, the liquid can be consumed throughout the day in one's coffee, tea or lattes, providing our hair (and brains) with the nutrients they need.

Eggs: As we began to go green in our beauty routines, eggs began to show up on the scene... essentially mixing them with olive oil and allowing them to condition our tresses. While exterior treatments for our tresses can be helpful, I've found it will only be a temporary remedy if we continue to feed our bodies foods scarce in nutrients. And while walnuts carry their share of Omega-3's, eggs provide many of the nutrients listed above including biotin and protein which can work to strengthen the hair and prevent the loss thereof. Below is one dish which delivers eggs into the diet so their nutrients can thus be delivered to the scalp. 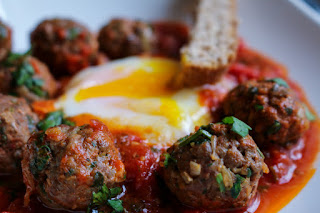 Moroccan Shakshuka: As summer falls upon us, I'm more and more tempted to attempt large-scale dishes like Moroccan Shakshuka. For any experienced home cook, this might be a walk in the park but for a salad bar aficionado like myself, such a dish provides just enough challenge and complexity to qualify as a "summer project". Amounting, essentially, to egg yolks in tomato sauce, this dish also contains ground beef and lamb, delivering the consumer with an additional hit of iron that can help feed nutrients to the hair follicle. Bada-BING.

So there you have it, a few dishes that can deliver nutrients to the body and by proxy, one's head of hair. And while the beauty of hair is not even skin deep, it's sometimes nice to enjoy the visual effects of healthy eating as the choices and decisions made to do so can be so arduous. As the hair shows, we are what we eat.

Every now and then, I inevitably wander into the mall by my house (usually for the free samples of kung-pow chicken and tea in the food court). Compounding on the theme of "free", I invariably take an escalator ride up one floor to Brookstone where I spend some "free time" in their zero gravity chair. Unlike the food sampled, however, Brookstone's zero gravity chair will never turn into a purchase based on its hefty price tag and hideous appearance. This being said, any amount of time in the chair can be relaxing as your muscles seem to rest in a floating state. For several seconds, you are completely at ease. Inevitably, however, you descend back down to Earth where you must work both against gravity and towards the purchase of a $3000 chair. Fortunately, however, there are several poses in yoga in which you need not pay to defy gravity... you simply have to work for it.


Defying gravity is fun... especially when it's a John Mayer song.

Like anything on Earth, rewards are often hard won and the physical results and subsequent relaxation which comes after conducting "gravity defying poses" comes at the price of engaging in the most difficult asanas within the Bikram series. Teachers claim they're hard, advanced students claim they're hard and I claim they're unbearable (if not worth the struggle). Below are several poses or asanas that will cause some pain and pleasure... or at the very least, get you ready for the beach. I'd say enjoy! but just grin and bear it...

Bhujangasana: Bhujangasana or more colloquially known as cobra pose, is essentially gravity-defying "lite". Before moving on to the more difficult full-locust asana, it preps you by requiring only half your body to lift off the floor instead of both the top and bottom of your figure (see below). Employed to strengthen the spine, cobra pose begins with one lying face down on a mat with the hands close to the shoulders. In an instant, one "takes off", bending their spine and head back towards their feet. While one is tempted to push their weight up with their hands, the real test of strength comes when one lifts their hands off the ground... and can still remain upright. A video of the pose lies below.

Poorna-Salabhasana: Two poses after bhujangasana comes poorna-salabhasana or full locust pose. After you've been prepped by lifting half your body, you are instructed to lift both your hands and feet (and head) in the air for several seconds. As stated before, the pose is known as one of the most difficult in the series but one that does not come without benefits (one of which includes increased flexibility of the spine). To begin, lay on the mat as you would in cobra pose (with your tummy on the floor). Spread both your arms above your head so that your body forms a "Y" shape with all facets remaining grounded. Next, "take off", lifting your arms, feet and head in the air as though an airplane is taking flight. Hold the position for 15 seconds before coming down and resting. Whew!


Gotta gotta get up to get down.

Technically, in poorna-salabhasana, only your hip bones remain on the floor while the rest of your body is in the air. It's a difficult goal but one worth working for. As my Italian yoga instructor likes to say, "Sooooo goooood for youuuuuu. Sooooo many benefits." Which is true. As we are told to "stand tall" in life, strengthening the spine can at least help us with our posture which is sometimes the first step we need to take on the day.

Posted by Eating Natty at 9:25 PM No comments: