I once listened to The Diana Chronicles on tape which was read and authored by Tina Brown (who seemed a bit hostile in her portrait of the former princess). In the book, Brown recounts a scene in which a young Diana glimpsed a sight of her future husband while playing hide and seek in a nursery. Returning home from her adventure, she proclaimed, "I've met him," knowing intuitively that she'd met the man she was to one day marry. My story might not have the same intrigue as a royal romance but, suffice it to say, I think I've come across a "cookbook" which will carry me through my cooking adventures. In short, I've found it!

Notes on Cooking: A Short Guide to an Essential Craft is written by Lauren Braun Costello and Russell Reich. Upon finding the tome on Dan Barber's Blue Hill website, I knew intuitively (much like Diana) that I had found a book I would carry throughout my home-cooking career. Devoid of a single recipe, Notes on Cooking provides a more fundamental approach to cooking or elements to consider before one embarks down the road of a dish. Filled with helpful anecdotes such as the suggestion of reading a recipe twice for familiarity and knowing the "flavor" of your water, the book equips cooks with a better awareness of basic elements affecting their final product. Ranging from the very basic such as the use of heat and narrowing to methods of choosing quality ingredients and finally presentation, Notes on Cooking, in my opinion, is a book that belongs on the shelf of any cook. Hopefully,  it will be a relationship that lasts. 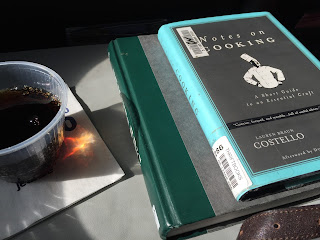 Posted by Unknown at 8:48 AM No comments:

Plants in the Mouth and on the Face

If you read this blog, you know I enjoy eating plants. Kale is likely my favorite despite the fact that it places me on a bandwagon with the rest of the kale-swept nation. With its not-so-bitter taste and loads of iron and vitamin-K, Kale presents a tasty way to stay healthy. My favorite preparation for the vegetable is most likely the braising technique. I actually just made some hearty stock from chicken feet which I hope to braise kale in this weekend along with some garlic and pepper. (For a less intensive, just-as-delicious variation of braised kale, click here.) Some plants, however, work well on the face. Today, on the Net-A-Porter website, a "headline" on the front page featured "Plant Power: Natural beauty wonders." Opening the feature, I found a variety of beauty products (mostly cleansers and moisturizers) concocted from a botanical foundation. One brand, featured consistently throughout the page was KORA Organics by Miranda Kerr.

Looking at KORA's website, one can easily identify that KORA's products are made using organic, vegan ingredients and through processes that are cruelty free (not tested on animals). According to founder, Miranda Kerr, KORA's "mix" fits the profile of ingredients she found lacking in other beauty products, mainly in its use of organic ingredients. While I have found there are indeed other organic or plant based products on the market (some brands include, Grown Alchemist and Aesop.) KORA seems to be relatively easy on the budget... if one is looking for high-end products. One of the products I'm dying to try, KORA's foaming cleanser, rings in at a price point of $52. In this regard, many primarily plant based products (including the others mentioned above) serve to heal and repair skin at a better value than ones created using mostly synthetic ingredients (here's looking at you Chanel...). While not as cheap as an oil cleanse, perhaps, my former post Halo refers to the fact that some days, one just wants a ready-made formula sitting in the shower. If such a product is organic and beneficial to the skin, all the better.
Posted by Unknown at 6:10 PM No comments:

I write about cooking A LOT, in an effort to understand the fundamentals of the process. I am currently tutoring students in phonemic literacy and, as a result have been tracing the English language back through time to the Indo-European tongue. Along the way, I've learned about prior languages which gave birth to our lovely "dialect" of today. (I say "our" in that, if you're reading this post, I'm assuming you're an English-speaker of some kind.) Just as language progresses through the ages, the development of a single dish is a kind of process. As any proponent of Soul-Food will tell you, one can taste the feelings in their food. A simple meal cooked with love will likely satisfy more than the rarest ingredients cooked with indifference. With many cooks (see Dan Barber), such feelings are not only directed towards the people they serve, they also lend themselves to a mindfulness about where food is acquired, the agricultural process and the method of creating a dish. Patrick O'Connell, proprietor of the Inn at Little Washington has mentioned the fact he conducts yoga class before shift in order to calm his charges so that they may be more centered in their cooking.

As I have delved deeper into the cooking process, becoming more mindful of what I eat and how to prepare it, I have found my framework of eating has shifted from trying new recipes with a variety of flavors to a handful of healthy, sustainable ingredients which I may cook in a variety of ways. In general, I have found a love of soups that can be made with a small number of ingredients based on the season. In winter I prepare creamy parsnip or carrot soup, in spring, lettuce, asparagus or spring pea soup. While these small number of ingredients share the bond of being green in color, they also share the need for broth in order to be transformed from delicious vegetable to delicious soup.To this end, I am picking up on the trend of bone broth.

Looking at the copious recipes for basic broths and stocks, most require the use of animal bones (beef, veal, chicken, etc.), aromatics (onions, carrots, celery, etc.) and water, boiled down for several hours in order to create a flavorful base for soups, stews, braises, etc. Bone broth, as far as I can tell, goes the extra mile in it's emphasis on health benefits in addition to flavor. While perusing Gwyneth Paltrow's site, Goop, I came across a link for Hemsley + Hemsley a blog run by two sisters and dedicated to healthy eating. On the site, a recipe for chicken bone broth was featured and it's myriad of benefits extolled. Aside from carrying less processed chemicals than your average "store-stock" the site claimed that the use of bone broth could also aid the appearance of one's skin (through collagen) and help one's joints (through the presence of gelatin in bones for the broth). Finally, as I had expected before, bones of animals such as chickens or fish can often be obtained for free from one's local butcher or fish monger. At that point, I knew I had to give this broth a try. In my search for a more methodical mode of cooking, I believe I have stumbled upon a healthy, essentail "product" which can be used in a myriad of ways. For the bone broth recipe, one may click, here.
Posted by Eating Natty at 11:26 AM No comments: