Recently, there have been small rumblings that the nutritional community is beginning to espouse what your grandmother has likely known for ages... that fats (found in nature) are likely not as harmful as sugars which are not (or are, like honey). According to The Wall Street Journal, items like almonds and avocados have been denied labels like "healthy" due to their fat content while items such as Pop-Tarts and other processed foods have been bestowed such honors (even though their sugar content often remains higher than their natural counterparts). Indeed, the processed food lobby is a powerful one; a fact I learned from Salt, Sugar, Fat. But common sense seems to rule the day and, now, the FDA is unveiling food labels which laud healthy foods as such and requires manufactures to place the daily value of sugar present in a serving of food (if you look at a food label currently, this percentage is oddly absent).

Ironically, in Always Hungry, I learned that sugar is (often) eventually stored as fat so the sugar lobby (acting like most lobbies) has pulled the wool over our eyes for quite some time. Sugar, like some varieties of fat, wreaks just as much havoc on our bodies. But the truth is, we need some fat in our lives... the good kind.

As I've begun to eat more naturally, I've noticed my skin has become a bit drier. Perhaps I no longer consume as much sugar which then cannot be stored as fat but, recently, I feel like I'm one eyebrow wax away from broken skin. But one need not look to sugar to attain fat. According to (of all things) The Free Dictionary, fat is, "an ester of glycerol and one, two or three fatty acids." And these fatty acids can be fantastic for your health.

While low-fat (high-sugar) diets were the rage of the 90's you probably heard of omega-3 fatty acids at the beginning of the 21st Century. Found in seafood, seeds and some nuts, these acids work to, "lower triglyceride levels," or levels of blood fat, can help to ease joint pain or even aid in recovery from depression, according to WedMD. And there are super yummy ways to attain healthy omega-3 levels within our diets. A few of my favorite methods for omega-attainment reside below. Enjoy! 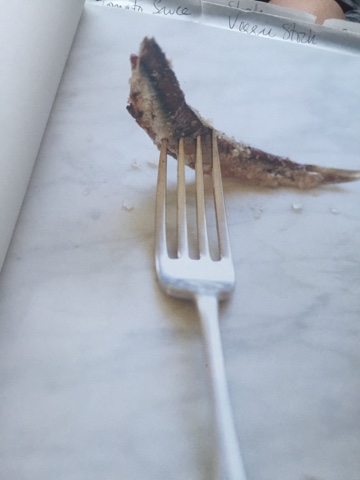 Anchovy Vinaigrette: As much as I bitch and moan about Gwyneth Paltrow being, like, a person... her cookbooks aren't half bad. Her first one, My Father's Daughter, introduced me to a world of dishes I didn't know existed. Cacio e pepe and duck ragu were things I never experienced growing up in an Irish-Jewish household where eating was more of a utilitarian endeavor. And one recipe which stood out from the actress's introduction to deliciousness was her Anchovy Vinaigrette.

As stated above, many seafoods, including anchovies, possess high amounts of omega-3 fatty acids and the above recipe presents a super-easy means of introducing them into the diet. While Ms. Paltrow presents a codified recipe in My Father's Daughter she also shares it on her lifestyle website... GOOP. Play with amounts until you find your "happy place" and enjoy over greens, potatoes or as a marinade for meats.

Charoset: Charoset, pronounced Ha-r-O-set, is one of those dishes we serve during Passover and wonder why it's never made again throughout the year. Physically, it's a mix of walnuts, wine and apples (among other things) but symbolically, it represents the mortar placed between the bricks laid when we were, "slaves in Egypt" which is always to be said with booming reverence. But as I get older, I've begun to make Charoset during non-religious events because... well, why the hell not.

Since it doesn't require heat and egg whites (like many recipes for roasted nuts) charoset can be prepared well in advance of any meal and is a cinch with clean up. In fact, the longer the charoset sits (within reason) the better developed its flavor becomes. Make a batch at the beginning of the week to carry you through various lunch, snacking and sandwich situations. Just be careful about the use of wine if you plan on bringing it to work 😉. 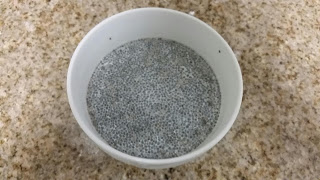 Chia Seed Pudding: Sooooo, I hate to admit it but this is another recipe inspired by the likes of Ms. Paltrow BUT I'm happy to say I've developed a variation which is uniquely my own. As both seeds and nuts contain a fair amount of omegas, this recipe delivers a double-whammy of good fats. Using almond milk to soak the chia seeds which leech a gel-like substance and textural goodness to the dish, making the above pudding can easily be accomplished overnight and ready for breakfast in the morning. You can follow my recipe below or follow the link above if you're looking for something more standard.

Almond Milk
1. Place the almonds and maple syrup in water and let sit overnight.
2. Blend the mixture and strain through a cheesecloth or milk bag.
Posted by Eating Natty at 6:59 PM No comments: