A Buddhist, A Yogi and Another Yogi Walk into a Bar

I know I promised to unveil my Chakra Series this week but before I do, I wanted to release one more post. It seems we currently find ourselves in an age where engagement is key. Engagement in our own health is key, engagement in our own lives is key and engagement with those whose opinions are different from ours is increasingly key. It's not that we're looking to change people's minds (I've come to the age which realizes such endeavors are futile) but as my personal political crush stated in his outgoing speech, we should not resign ourselves to news feeds filled with statements aligned with our own views. As such, I refuse to unfriend or unfollow people whose posts make be do a double-take (of course, who would do this anyway). Instead, when I see a post I find shocking, I'll often comment instead of pass over it angrily, cursing its author for ruining what could have otherwise been a thoroughly boring Facebook experience. It's tough to disagree with people (particularly if the person was once your high school crush) but I truly believe the line from Before Sunrise which states that, "conflict can be a good thing"... if it leads to deeper understanding. This being said, it's nice to agree and, as you may have gathered from the title above, a Buddhist, a yogi and another yogi are in general agreement as to the central role of the breath. Each tradition, however, tends to employ the breath differently, coalescing once again to have each form of breath result in the end game of relaxation. And since we all could breathe easier these days and because variety is the spice of life, I've included each group's perspective on the breath below. Whichever way you choose to relax, Just Do It and enjoy!

When it comes to Buddhism, one thing my father and I can agree on is that we both like Thich Nhat Hanh.

Zen Buddhism: I chose Zen Buddhism as a conduit to breath work in that a) my father took up Zen Buddhism when he decided to make a change to a more Eastern form of "religion" and b) its stark minimalism places an emphasis on the breath almost fully, without material distractions, chants and the like. From what I can tell, things are essentially stripped down until it's just you and your breath. And it is this dynamic between awareness and the breath that is supposed to bring about a sense of relaxation. While the point of meditation is to go beyond relaxation, I figured relaxation was good enough and decided to ask my dad (el Buddisto) about why the breath is key in Zen and how it can lead to relaxation. A few (adapted) questions and responses lay below:
1. Why did Zen Buddhism choose to focus on the breath as opposed to an image or the recitation of a word or phrase?

In general, we're always breathing, it's something our body does naturally. Even when we're sleeping and unconscious, our body still breaths so we don't have to think about it. In this sense, it's not that other forms of concentration are wrong, it's simply that the Zen tradition chose something to concentrate on that's naturally there.

2. Is there any way to breathe in Zen Buddhism that you're supposed to adhere to (i.e. exclusively breathing through the mouth or inhaling and exhaling for a set number of seconds)?

Breathing in Zen is natural. One is simply supposed to follow the breath as it is, not to get caught up in whether he or she thinks the breath is too fast or shallow... however it is is fine and should simply be observed. After awhile, the breath will naturally find a pace and one will begin to breathe shallow breaths into the chest.

So how does following the breath result in relaxation?

When one focuses on the breath, thoughts and fantasies which exist only in the mind will fall by the wayside. As such, the emotions and reactions associated with such thoughts will begin to dissipate. Just as lights begin to go down in the city as people vacate their respective offices, our neurons become less reactive, leading to a calmer environment in our minds which can give way to greater wisdom and clarity.

Sounds good to me. 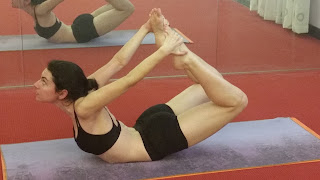 As hard as yoga gets, one just keeps breathing (through the nose).

Bikram Yoga: Just as one is required to breathe naturally through the nose in Zen Buddhism, the same is true for the participants of Bikram Yoga (save for an initial breathing exercise). Throughout one's hour-and-a-half stay in a 105 degree room, one is instructed to breathe through the nose, not for the direct benefit of relaxation but to stave off panic should the process get too intense.

While the Chakra Series will be released next week (maybe), the chakras (or chakra) associated with nose breath in yoga is known as Manipura, a site linked with the solar plexus. Within the Central Nervous System, two branches, known as the sympathetic and parasympathetic systems take care of separate needs for the human body. The latter, or parasympathetic system, takes care of "mindless tasks" (or those we don't have to think about) such as "rest-and-digest" processes, salivating and lacrimation (tears), according to Wikipedia. While the sympathetic system also operates on a somewhat unconscious level, it is the system associated with our fight-or-flight response, kicking our adrenaline into high gear when posed with a threat. Much as one is told to, "take a deep breath" when upset or before making a big decision, breathing through the nose can stave off the fight-or-flight response, keeping us aligned with the parasympathetic system. Who knows if it's true (my yoga instructor was my go-to source on this) but using the breath to stave off panic is nothing new. Lamaze breathing techniques during labor or tactical breathing techniques in warfare have been used for ages in guiding us humans through difficult periods and into relief.

Kundalini Yoga: Recently, I read an article in which Russel Brand referred to Kundalini Yoga as the, "crack-cocaine" of yoga practices (ironically, he's a devote as a means to overcome his drug addiction). I don't know much about Kundalini Yoga but became recently familiarized with the "genre" after reading a book review in Vogue written by one of its apparently famous devotees, Guru Jagat. A contemporary of Amanda Chantal-Bacon and a wearer of white linen at all times, Jagat's Instagram account was enough to spur my purchase of her book, Invincible Living (full disclosure: I had seen it at Barnes and Noble the week before and was already intrigued). In her tome, Jagat talks about yoga (of course), our relationship with the media (read: society) and points out some breathing exercises conducted with a specific purpose in mind. Having been around yoga for long enough, I've learned breathing isn't exclusively a means to unlocking the secrets of the universe- sometimes, we want a little extra energy. Ergo, one of her breathing exercises for "vital energy" lies below.


Of course, one need not practice hippie-dippy rituals in the grocery aisle (unless you're in LA). For me, using the breath as a tool seems intriguing. It can calm us down, it can give us energy but, most often, it brings us back to center.

Posted by Eating Natty at 6:39 PM No comments: