A few years ago, a picture circulated across  the Internet with the tag line, "rush hour in North Korea." With only a single car stopped dutifully at a stoplight, the picture was meant to be sardonic, but I couldn't help feeling a bit envious (yeah, my priorities are that out of whack). Despite our President's attempts to make nice with the nation, there are many differences between the DMV (a colloquial term for the D.C. metro area) and the DMZ... not the least of all being traffic. But the picture reminded me of how backed up our large intersections can get in D.C., Maryland and Virginia which then effects nearby traffic and other intersections before the city turns into an actual cluster@*%! instead of just being a well-earned symbol of one. The same is true of our bodies (kinda). After getting to know my body a bit better through yoga, I've come to find that there are a few key "intersections" which need constant maintenance lest they back up and restrict the flow of traffic (or blood). And while my ankles and knees at the ones making all the noise in class, I've noticed my hips and shoulders are the larger cross-sections to focus on in a class. 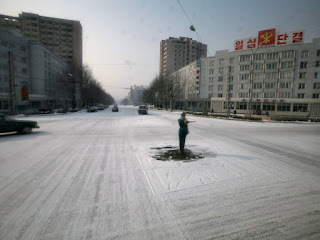 Just like the D.C. metro area includes the spaces of D.C., Maryland and Virginia, our hips and shoulders include not only include the corresponding bones themselves but the areas surrounding them as well. In this sense, when holding a hip stretch, one might begin to feel a stretch in the lower back. In terms of shoulder stretches, one will likely work out the neck and/or chest simultaneously. And so, with such a large swath of area covered, it's important to keep tabs on such areas just as one would want to ensure all traffic lights work in a major intersection before moving onto smaller ones. And so I've included a few stretches which work out these keys areas ranging in "difficulty" from easy to hard. Enjoy!

*Note: These stretches are not too difficult. Some may simply allow a deeper stretch than others. I place them in such an order to simply show a range of stretches from mild to moderate to "more moderate". The stretches are intended to be mixed up depending on your needs of the day.

Easy: Blocks, in general, are used in yoga for those beginning and needing assistance with balance, etc. I still use blocks a lot, especially for the supported poses below. What can change from a beginning to more experienced yogi is the height of the block. In the case above (and below), the block is meant to separate your hips or shoulders from the ground. In this sense, the "higher" you place the block, the deeper the stretch will be.

Medium: Life should be easy. But in yoga, we learn it's often hard before it becomes so. In this sense, it's nice to have some yoga postures which maintain the balance between ease and difficulty. Below are some middle of the road stretches for the hips and shoulders.

Hard: As stated before, medium and easy are really misnomers. What the stretches below will do is give you a slightly deeper stretch than the ones above and might be a bit more significant on the pain scale. But sometimes, that's what our body needs. Again, these postures are not so difficult in doing but difficult in wanting to do them. When shooting my silly videos for the post, I had recently pulled a muscle. Therefore, while I wanted to demonstrate half-pigeon pose, I demonstrated its inverse, figure-four (both are shown below). If you do choose to practice pigeon pose, you will begin to feel a stretch in your lower back... moving into not only the hips themselves but their surrounding suburbs.

Letting a pro show you half-pigeon pose.
Posted by Eating Natty at 6:30 AM No comments:

The school year is gearing up which means it's a good time to think about slowing down. Just as nature provides foods to cool us in the hot, hot, heat, (see Summer Lovin') it's good to bring balance to a busy schedule with some slow movements which can act as a foil to new and hectic schedule. In yoga, it's sometimes suggested to flow through your asanas at an extra-slow pace. Beyond the desire to break the habit of wishing a difficult posture or sequence to be done with, moving very slowly through your poses can indicate where you need to adjust your stance or which part of your body is holding tension. However, I generally like to keep things as simple as possible and so, there is a very basic "sequence" I prefer to run through in the morning which helps to slow me down and bring a greater awareness to the day before I get up and go, go, go. And because your schedule's already busy, I made a video to save you some time. Enjoy! 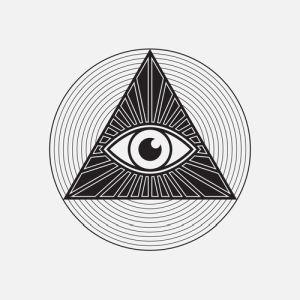 References to the "third eye" shows up quite a bit if you know where to look ;)

Before we begin, however, I'll spell out a few things that didn't make it into the video based upon the lack of storage in my phone. Child's pose is pretty much the best. I remember doing it when I was young before I knew that yoga or any eastern philosophies existed. And speaking of which, the mentioned pose and its variation play a bit on the Ayurvedic concept of chakras or "centers of energy" in our body. The chakras begin at the pelvic floor and make their way up to the crown of one's head, focusing on different desires and needs at each "pit stop". However, I bring up the concept not because of esoteric theory but rather for the very practical coincidence that our Ajna chakra comes up a lot in yoga postures.

The Ajna chakra (located at one's "third eye" so to speak) is nodal of energy associated with intuition and balance. Physiologically, however, the Ajna chakra is located at the center point between (and a little above) the eyes on the lower forehead where our "third eye" and/or pineal gland exists. So whether it serves as a pivot point between our feminine and masculine energies in the Ayurvedic sense or between the right and left brain in the Western one (perhaps it simply serves as a link between past and present philosophies) the Ajna chakra is associated with balance. And who couldn't use a little balance as the new season begins. So to give our intuitive chakra or our bundle of nerves between our brain hemispheres a little massage in the morning to prepare for the day, do the following...

Posted by Eating Natty at 11:41 AM No comments: