When I was in camp, there was a massive songbook we were given on Saturday nights which contained the lyrics of songs we might choose to sing. There were more traditional songs and ones more current, which, being the younger camper I was, generally preferred. But, unlike my fellow campers, I was less cultured in the likes of Broadway or even classic movies which led me to believe that the movie Grease was about the actual substance. And, on some level, I suppose it is but it's really a love story which means its songs can border on the scandalous... when you're young. I remember cracking a smile with my bunk mates when Summer Loving was chosen as a song (or was it Summer Nights). To us back then, the song was rife with innuendo but now I realize it's just horribly un-PC. But summer is a time for love and unlike the ubiquitous summer fling, nature takes actual care of us by providing us with foods that help cool us in the warmer months. Below are a few foods that help to balance the rising temperatures at peak season and a few recipes to which they can be applied. Enjoy!

Even though I write about food, I rarely know the specific time frames in which foods are in season. The other day, someone was raving about the corn on the cob at a particular restaurant to which I replied, "'tis the season." In response, they informed me that, "actually corn season isn't for another few weeks." (This post was written several weeks ago, btw). I'm not sure if I hate those particular people or am simply self-conscious that I don't know when foods are in season but I think it's a combination of both. Anyways, when looking at the spectrum of the summer, I'm well aware that at least cucumbers, tomatoes, zucchini and melons (basically foods heavy in water content) peak sometime between May and August. And while you may have noticed in Mylking It More that I'm not the top recipe developer in the game, I've linked some recipes below which make the most of these summer sensations.

Raita: Just as winter is a great time for one-pot recipes where you can throw something on the stove and forget about it, summer (in my mind) is a time for dips. Whereas we might curl up for warmth in the winter and man-spread on the porch in the summer, we likewise let our flavors combine in our winter stews and keep things rather separate in the summertime. And to this notion, cucumbers pull double duty as a food you can dip while cooling your body with its high water content. According to Chinese Medicine (and Men's Journal) there are warming foods which boost circulation and cooling foods which help, "clear heat and remove toxins from the body." I happen to like my cucumbers with hummus but on the topic of "double duty," why not make a dip with cucumbers themselves? The raita above will keep you cool as a cucumber...

Salsa: Following the theme of dips, we come to one of my summer favorites... salsa. I'm a huge fan of salsa... probably because I'm a big fan of sauces which is technically what "salsa" means. In the recipe above, the cooling power of tomatoes is contrasted with the fact that they're roasted... taking out a little more water and adding a little more flavor. Of course, you could always make salsa fresca without the heat (link here) or, put those tomatoes to good use in a gazpacho.

Melon-Mango Yogurt: In Mylking It More, I tried to make (n)ice creams that maintained the consistency of something normal people would eat... but to little avail. Before my ice creams went in the freezer, they generally maintained the consistency of yogurt (if I was lucky). And so, while I attempted to make a melon-mango ice cream, I simply settled on melon-mango yogurt in order to save you the extra step of freezing. Like their cousin the cucumber, honeydew melons can cool you on a summer's day while adding a bit of sweetness to your routine. To make the yogurt above, place the following in a blender:

Blend on high and enjoy.

So there you have it. A couple'a recipes that can give you that cooling sensation in the summer while adding some flavor to your meals. Try one, try all or if you need some more inspiration, a few other recipes lie below. :)

101 Cookbooks: Summer Zucchini Recipes: Just like her salsa linked above, Heidi Swanson elevates this summer star by mixing it into a Thai soup or lets it shine with pasta. Either way, she makes use of the summer's bounty and the ingredient itself (as part of the melon family) will do your body good too.

Cucumber-Cantaloupe Salad: "Keep it in the family," they say. This salad, utilizing both melon and cucumber does just that and like the salsa above, provides the opportunity to use some cilantro as well (my favorite)... see Aromatherapy.

Watermelon-Feta Salad: I saw a funny cartoon on Instagram a few days ago which featured trendy foods within the past few years. As watermelon-feta salad was all the rage back in 2013, I suppose the recipe above is a little passe but, featuring the biggest member of the melon family, this salad is sure to cool you in the heat of summer.
Posted by Eating Natty at 8:49 AM No comments:

As I said in Mylking It, mylks, or simply "milks" if you're not an asshole, are a great way to set the foundation for healthier eating whether mixed in with your coffee, smoothies or... ice cream! During several summers in high school, I craved ice cream on the daily. And for some reason, this summer, I've been craving ice cream the same way I did back in the day. However, I live in a place that's not quite urbane enough to offer hip dairy bars or suburban enough to offer old-timey ones. To some extent, I'm pretty much left with the McDonald's drive-thru. However, as these ice cream cravings are now occurring in an older version of myself, I'm luckily armed with a few recipes for vegan ice creams which can put the mylks made to good use.

Like the pretty homogeneous process for making milks, vegan ice cream has a pretty standard base of frozen bananas, a milk of choice, some salt and coconut oil (I've also used some nut butters) which go into a blender before adding any additional flavors. However, the difficulty with keeping it vegan is that when it comes to said add-ins, options like peanut butter cups go out the window and fruits pretty much take center stage. So the issue in this matter is pairing said fruit with the type of nut that makes the milk that will make it all taste great. After some experimentation, I think I've settled on a few fool-proof combos which lie below. Enjoy!

Cherry-Almond: I started off with almond milk in Milking It to keep things alphabetically appropriate and I start with a cherry-almond combination here because it seems to be the most popular fruit-nut combo out there. My father loves ice cream and he seems to like cherries so we'll call it a vegan ode to my vegetarian father. Cool. To make said ice cream, begin with the base above, using 3 frozen bananas (sliced), 1 cup almond milk, 1 pinch of salt and 1/4 cup coconut oil. Add 3/4 cups of pitted cheeries and about and 2 tsp. almond extract. Blend and freeze for several hours in a Tupperware container or loaf pan lined with parchment paper. 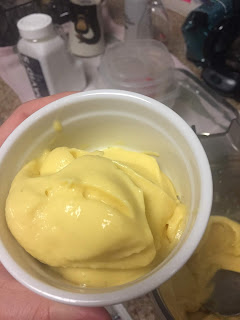 Mango-Coconut: When doing a little research for this post, I noticed that mangoes where on sale. So while it offered some financial ease, it also presented the challenge of a pleasant pairing as the acidity of mango seemed to go with fuck all in the nut department. But, after a stroll down several aisles, I noticed that a (literally) big nut that I never thought of was the coco-nut.

As stated in Mylking It, Amanda Chantal Bacon in her Moon Juice Cookbook presents an array of mylks (as she calls them) that can serve as substitutes for the dairy variety. And while walnut, almond and oat milks are easy enough to make, her lait de cocoa was simply unmentioned because... I'm not sure if frozen coconut strips exist anywhere other than California. Buuuuut, canned coconut milk is a different story. After it appeared that I had purchased the unsweetened variety of coconut milk, I decided to add 2 teaspoons of honey for some sweetness and 3/4 of a Serrano pepper for some spice. Recipe lies below. (Note: You can buy mangoes fresh, peel and chop them and freeze them before blending or simply purchase them frozen).


*1 13 oz. can coconut milk
* 3 cups mangoes (frozen)
*3/4 of a single Serrano pepper (I kept the seeds in the pod)
* 2 tsp. honey
* pinch of salt
To make: Combine all ingredients in a blender and blitz at a high speed. Decant the mixture into a Tupperware container and freeze overnight.

Walnut-Date: When it comes to ice cream, texture is a thing. While I'm not super picky about textures in my other foods, I hate a grainy ice cream. Where was I going with this? I don't know. But walnut milk is one of my favorites. More forgiving than almonds on the hardness scale and generally more savory in my opinion, walnuts do carry more flavor than the almond. In this sense, they're limited in what they can be paired with but the sweet date seems to go well with the meaty morsel. So, to make this combination happen, place 1 cup walnut milk (see Mylking It for the recipe itself), 1 cup pitted dates, 2 sliced and frozen bananas, a pinch of salt and 1/4 cup coconut oil in a blender. Blend on high and freeze overnight. Then enjoy.

Pistachio-Pistachio: Save the best for last they say. I have a thing with pistachios. I love them raw, I love them for making milks and I (doubly) love them in ice cream. Back before chocolate ice creams got really creative, what with adding peanut butter cups and/or the kitchen sink, pistachio and peppermint ice creams were my side pieces of the dairy world. So I figured I'd create a double-pistachio ice cream to celebrate the heyday of my youth. To make: prepare the base using...

So there you have it. A couple of ice creams to get you through the summer. No recipe above contains cream or ice. Discuss.