Currently, I'm working on a post about clean eating and how it can clean out things very internal (like your gut) to things very external (like the environment). So, suffice it to say, clean eating (as I've found it) can really clean out your olfactory glands... allowing you to consume smells more intensely or ones you may have overlooked previously. And whereas before I considered more expensive forms of aromatherapy (see: Aromatherapy Associates) I find that today, having a few simple smells around the house can brighten my mood/ease my stresses or simply make my experience in the kitchen more interesting.


Tata Harper Aromatic Stress Treatment: My engagement with scents as anxiety reducers really began when I read that lavender could play a roll in easing one's mind. How hard could it be to find lavender-scented shit? But the truth is, as ubiquitous as lavender is across bath and body products, most of them are laced with other chemicals that might undo any good the lavender presents. Enter Tata Harper products. While expensive, Tata Harper products feature non-toxic ingredients, grown on her farm in the state of Vermont. While I don't buy her skin-care products (or many skin care products for that matter), I did buy her lavender-scented aromatic stress treatment to ease my sense of the daily jitters. Does it work? No. Do I maintain that one day it will work. Yes.

Dr. Bronner's Pure-Castille Liquid Soap: While I can't afford anything of Tata Harper's that requires more than a small dab on each wrist, Dr. Bronner's Lavender Scented Soap is another deal. While a little more expensive than Ivory which always makes me shake my head as I bring it to the checkout line, it does smell pretty good at a price that lets me clean my entire body. Does it work as a scented de-stressing agent? Yes. Do I  mean it? Yeah, prolly. 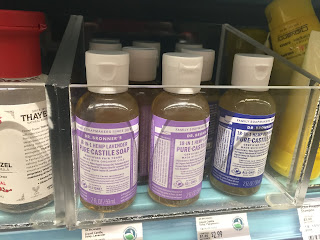 Herbs: I'm a pretty visual person. In a very embarrassing sense, this is probably why I became a fiend for cooking. While books never really held my attention, I could breeze through recipes, look at the pretty pictures and actually do something with the information. And once those videos came out showing how to make a meal in a time lapsed-sequence, it was all over. And the Food Video Channel for the New York Times runs a few good videos that are less frenetic than those of the Tasty variety and maintain healthier ingredients. Again, when it comes to anxiety, eating healthier presents the middle-way of something both effective and (often) easy. And so, in one video, a cook offers that chopping and using herbs in cooking offers a good bit of aromatherapy in the comfort of ones kitchen. While the Peruvian chicken or whatever she goes on to make looks tasty, I've offered some additional recipes which make good use of herbs as well.

Green Goddess Dressing: I made green goddess dressing a few summers ago (gleaning a recipe from the New York Times - surprise) and now it seems to be everywhere. Being relatively easy to make, the dressing features parsley as a staple flavor, an herb which carries a variety of benefits. While there is no evidence that parsley affects the stress levels of one's body, it can have a myriad of other effects within our system. According to physicians featured in Reader's Digest, parsley carries a fuckload of vitamins, including A, B, E and K which can help with our eyes, skin, inflammation levels and bones respectively. Basically, it can make you feel like the goddess you are.

Dilly Dilly: I love dill... way more than I like those Budweiser commercials. And unlike some other herbs (see below) dill lends itself to dishes that stretch across several seasons. And, unlike parsley, dill (or dill weed) has been shown to have positive benefits on our mental health. According to Dr. Josh Axe, dill weed has been demonstrated some antidepressant qualities what with its polyphenols and tannins and whatnot. And in terms of packing in the herbs, dill features well in an herb salad but for me, a little Greek restaurant down the road features dill potatoes and they're my favorite. Get a (similar) recipe here. If you're super ambitions or just want to use up the dill in your fridge, you can pair it with a tzatziki sauce. Double dilly.

Fava Bean Dip: The only herb I like more than dill is probably cilantro. Having been blessed with genetics that doesn't make it taste like soap, I tend to put cilantro in a lot... in the summer... when it can pair with a lot of foods. Whether it be a salsa with ripe tomatoes or the fava bean dip above, cilantro goes well with something cool when it's hot.

Herb Oil: Or, you could just make an herb oil which, obviously, I wanted to share in video format ;)

So there you have it, a few scents that can help you "smell the roses" of life. In my experience, whether they truly work or deliver a placebo effect... they at least allow me to engage more of my senses throughout the day. Perhaps I will become a less visual person after all.