In Tea Timing for (Part) 2, I promised a continuation on the topic of teas which could be used to calm oneself as one tries to... calm oneself, simply through the act of taking a few extra minutes to drink tea instead of engaging in knee-jerk reactions. While chamomile tea was referenced at the beginning of the last post (and it does have calming properties) lavender tea was put on the official "languid list" as medical studies have shown the herb's aroma to have calming effects on the nervous system. However, there are other, lesser known substances which can carry these same qualities.

As of late, I've been getting into the "fairy dusts" of superfoods. These are not your grandmother's acai berries. I'm talking about seriously falling through the looking glass and becoming intrigued by substances, tonics and herbs such as Ashitaba, He Shu Wu, Maca and Rhodiola (to be alphabetical about it). In general, I'm not sure what these substances are but they seem to keep appearing in my newsfeed, Instagram feed and in articles of interest. As stated in Trying to Get a Handle on It, I created both Snapchat and Instagram accounts for my new site: Eating Natty (I have yet to get my title transferred). In doing so, I began to follow organizations and people previously encountered on my "other" favorite site: Into the Gloss. In this manner, posts from Sun Potion, Moon Juice and CAP Beauty, began appearing in my feeds offering recipes for Yunnan Black Needle Tea, dried persimmons with sprouted walnuts and Brain Fuel (which can really only be understood through the photo below). But, as I did some research for each component of my "tea series", I saw the world of esoteric superfoods and pop culture collide as BuzzFeed's article, 10 Types of Tea That'll Calm You Down, featured some of the elements seemingly beknown only to the most obsessive of food lovers. Ergo, without further ado, the list of calming teas gets weirder and continues... 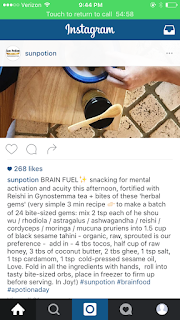 All those little words are ingredients!

Ashwagandha Tea: According to the aforementioned BuzzFeed article, ashwagandha tea has calming effects similar to lavender. And according to Sun Potion, a site that markets the product, "[a]shwagandha is reputed to help support emotional balance and brain function." The site goes on to refer readers to the National Institute of Health and the site, Heal Naturally, both of which report similar findings.

Lemon Balm Tea: A as a co-member of the Lamiaceae Family, alongside mint, basil and the like, lemon balm has been shown to reduce symptoms of anxiety when combined with valerian according to the University of Maryland Medical Center (an institution referenced on many a superfood's website). Many lemon balm teas are sold in bagged form, including the Organic Lemon Balm Tea by Buddah Teas or the Anise, Peppermint and Lemon Balm Tea by Palais des Thes but, according to the above medical site, "is [also] available as a dried leaf... in capsules, extracts, tinctures and oils." For myself, a minion of the mantra, "don't eat it if it comes in a bag or a box" prefers it in dried form... even though it comes in a bag, whatever.

Matcha Tea: Matcha tea has many benefits. According to Dr. Andrew Weil, this powdered form of the green tea leaf can, "[protect] against many kinds of cancer," what with its myriad of vitamins (A, C, E and K to name a few) and catechin polyphenols. But I include matcha here not because of its physiological benefits but because it is part of a ceremony which can provide psychological ones.

The Way of Tea or Japanese Tea Ceremony was developed in the sixteenth century and is essentially a ritualized tea service which, according to the Metropolitan Museum of Art, "[places an] emphasis... on the interaction between the host, guests and tea utensils." Traditionally conducted using matcha tea, the ceremony serves as a meditation on tea and, incredibly, imperfection. Through the Japanese lenses of beauty as a state of natural simplicity, imperfection holds a role in valued objects. I remember learning in college how Japanese objects (most often tea pots) were intentionally made imperfect in order to create a more natural vibe within them. And while matcha, might do our bodies good, a focus on imperfection through a tea ceremony might be the one thing to make us breathe easier. Enjoy!
Posted by Eating Natty at 11:07 AM