I don't always tutor outside of school but when I do, I like to scaffold my lessons. Technically, scaffolding means to teach a lesson beginning with the more basic levels of Bloom's Taxonomy (see below) and build up to the system's more advanced levels. But here, scaffolding means I cover one topic, then another, then revisit the former one once it has seeped into the subconscious (I hope). It's a little like Jennifer Aniston's workout routine (as told to Well+Good) where she claims she likes to do interval training because,"it's monotonous to do one pace. The whole time, you're body goes, 'I know what's happening." So I figured, I mix it up a little, changing gears from my last post on Spirit Animals in order to revisit some superfoods discussed beforehand.

In addition to educational theory, I wanted to revisit several topics covered before mostly because I saw references to them in the news. And rather than bore you with pontifications on such articles, I figured I'd put them in list form and give a brief summary of each. Enjoy! 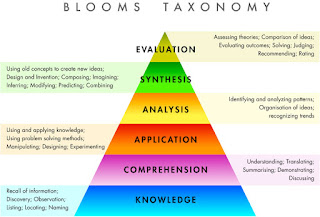 Gwyneth Paltrow's Morning Smoothie is Crazy (Expensive): Within my education training, we were schooled in the difference between primary and secondary sources (as most of us were going into Social Studies education). A primary source, we learned was that which directly related to an event being studied. Letters from a solider fighting at Gettysburg, pictures and even news articles citing eyewitness accounts were all labeled as primary sources. Those sources which derived their information from such sources (instead of the event itself), however, were called secondary sources. Here, Food and Wine's article on Gwyneth Paltrow's smoothie is a secondary source and thereby, one which I should have introduced second. But I decided to start here because it was the first article to bring my deeper into the rabbit hole of superfoods. Whereas I thought myself crazy for wanting to purchase Sex Dust (a conglomeration of various superfoods) to the tune of $60, learning Paltrow used the substance on the daily made me feel no less insane but at least... not alone.

GP's Morning "Smoothie": After reading Food and Wine's article on Gwyneth's expensive habits, I kind of promised myself that I wouldn't look at the original recipe whence they received their information. But, curiosity got the best of me and I found myself looking at the primary source on goop. And as I viewed the original recipe, I noticed that Paltrow put more than just an assemblage of Moon Juice dusts into a vat of soymilk and almond butter... she added other superfoods which I had my eye on as well. But, to some extent, I noticed such ingredients repeat in their function (re: most of them serve as stress relievers). However, this is a topic which will be tackled in the next blog post.

What Gisele Bundchen Eat On Vacation: While I was aware Gwyneth Paltrow is a "bigger pimper" of food trends, stumbling upon an article revealing Gisele and Tom Brady's eating habits en vacances made me think that perhaps powdered superfoods (or superherbs) were part of a larger movement. According to Joanne Gerrard Young (the couple's personal chef in Costa Rica) Gisele (and Tom) seem to eat, "a 80/20 raw diet with colorful salads and lost of fresh veggies." In addition to veggies, however, there seems to be some powdered goodies (like maca!) in the recipes Young describes. And so, as I thought these powdered delights might be the next big (cost) thing on the market, I wanted to do a little investigating to see how well they worked.

Is There Any Science Behind Gwyneth Paltrow's $200 Smoothie? Either Way, We Tried It: While falling down the rabbit hole of superfoods, it's easy to forget that there's a real world out there... one where people derive their nutrients from actual foods (although, what defines "actual" food these days? To find out, see the next article) But, suffice it to say, there wasn't anyone I could turn to and ask, "how does ashwagandah actually taste?". So, as stated before, I was lucky to happen upon some articles related to ones I had been reading. In the Washington Post article above, a team of journalists (and a doctor) assemble to create and taste Gwyneth Paltrow's smoothie with all their journalistic skepticism. The article was helpful in that, like a magician, the doctor was able to pull this rabbit out of her hole (or hat) and lend some medical expertise to the situation. It was also helpful in that, before spending a boatload on new ingredients, the journalists at the post assured me they taste like shit. I'll probably buy into the hippie-hype (and products) tho.

The Fight Against Food Fraud: Oddly, it is the Financial Times which makes me want to hug my local farmer.