As a teacher, it seems some lessons will be straightforward. You think that, to teach Maslow's hierarchy of needs, you should ask students to rank their needs from least to most important or a lesson on Shakespeare might lend itself to an in-class performance. However, I've found in the past that, sometimes, our first reaction as to how we might teach a lesson gets thoroughly amended once other factors come into play. Depending on the age, some students might need to learn what a need is or sometimes, a teacher might find it favorable to teach the meaning behind Shakespeare's plays, rather than have students memorize its lines. The same kind of logic applies to my beauty products which, while albeit in a different stratosphere of my life, sometimes takes some alternate thinking when it comes to "product placement". 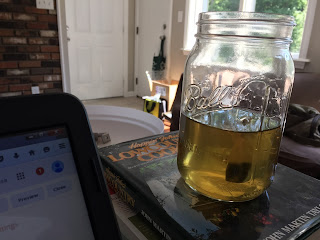 Alice's teacup for the twenty-first century.

While most of my beauty products are natural (and cheap) a lot of them can be found in my kitchen. The baking soda I use as an exfoliant, the honey I sometimes use as a cleanser and the olive oil I sometimes use as a mask for my hair all can be found in cabinets either below or above the stove. This grows into an inconvenience once I'm in the shower and realize I've left a certain ingredient downstairs. While I don't really want to keep a box of baking soda in the bathroom (I'm afraid it will absorb a lot of the moisture before it even reaches my skin) and I prefer glass bottles which can break in the shower (see Oil My Goodness) I find that strategically placing these objects around my house is a helpful way of putting them to use.

So great is my love for glass bottles and so great is my need for fiscal conservatism (in my own life, at least) that I have a collection of pre-used glass jars that would make even the strongest penny-pincher blush. There are glasses that once held fennel seeds, glasses that once held green olives and Mason jars galore that may have once housed a gift... all thoroughly put through a heavy rinse cycle in the dishwasher. These bottles help to house teas, infused oils and most importantly (maybe) beauty products. Indeed, reused bottles don't only help the environment and allow for more key placement of items around the household, they can also save some coin. As a Best Beauty Tip on Into the Gloss states, "I decant a lot of my beauty products into Muji containers. I like the clean look, and it also allows me to buy things in bulk, which saves money." 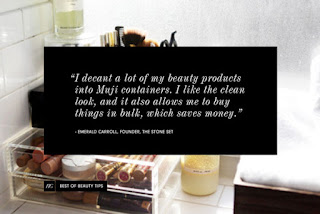 My favorite bottles are the ones which once housed dried herbs and spices. They're the right size, making them easy to handle and inconspicuous on a dresser or vanity and often come with a cap that allows for a slower release of its contents. But while these bottles are great for baking soda and/or cornflower (good for patting on tired eyes) they aren't ideal for others. Herein, therefore, lies a few tricks for the placement and storage of natural (beauty) ingredients around the household.

Dry Brush: I'm relatively new to the dry brush game. I suppose it was a product I read about whose cost was much lower than its purported benefits. Simply moving a dry brush across one's skin in motions towards the heart is said to exfoliate, jog the lymphatic system and possibly release toxins from the body. While the jury's still somewhat out as to whether a dry brush can deliver all said effects, I do find it to be a good exfoliator. And this is good since I often find myself in a shower post-yoga without any good exfoliant (see Poppin' Bottles). When I first came up to Connecticut for the summer, I placed my brush squarely on a bureau outside the bathroom where I often found it after my shower and still damp and done with my beauty regimen, would sigh and say "maybe tomorrow." For some reason, the dry brush moved downstairs to the entryway where I come in and out of the house. I suppose one day, I remembered to use it and brought it downstairs in order fold it into the rest of my morning tasks such as boiling water, watering the plants, etc. As a result, I see my brush each morning before I run off to yoga and, remembering my regret each time I hit the showers, quickly run it across my skin to jump-start any blood flow before the day begins.

Oil Cleanse: An oil cleanse is something that further points to my frugality when it comes to the beauty arena (but, seriously, does anyone want to buy Lancome?). I've recently run out of moisturizer and, instead of navigating the seas of likely beneficial new products, I've decided to start doing an oil cleanse using the olive and castor oils I've had laying around for awhile. Basically, oil cleansing involves using oil in a bottle to dissolve the oil on your face ("like [apparently] dissolves like," according to Kathryn M. Wagner at Princeton via the Purdue website). It also means one might not have to moisturize their face as much since using oils on the skin also has a (likely) moisturizing effect. This is all well and good but the reason I have castor oil laying around in the first place is because I could never get my act together, mixing it with olive oil and bringing it upstairs in a covered, waterproof vessel pre-each-shower. Also, the method involves facecloths which I also couldn't get my act together to buy. Here, though, is where said multipurpose spice bottles come into play. Since my preferred mixture for an oil cleanse involves one part castor oil to two parts olive or hazelnut oil (the mixture generally suggested for oily skin), I simply mix them together in what once was a bottle for Yellow Mustard Seeds and keep it on my shower rack (a good investment if you're keeping glass anything in your shower). The size is small enough to fit comfortably amongst my anti-dandruff shampoos and body washes and large enough to last for about a month of oil cleanses. C'est parfait! 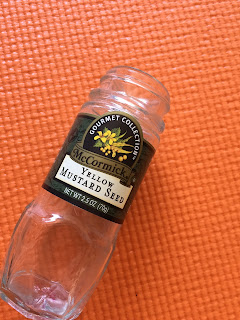 Cider Vinegar: I used to use cider vinegar a lot in the shower before I started hitting the yoga studio close to four or five times a week. The irony is that, increasing my participation in yoga should have increased my use of vinegar for its anti-fungal properties which can rinse off anything that made it from (sweaty) yoga mat to body during a workout. However, its liquid property makes it an inconvenient item to perpetually keep in a workout bag. At home, however, an old soy sauce dispenser filled with cider vinegar is placed staunchly on my shower rack throughout the year. Even though it's generally suggested to dilute one tablespoon of vinegar in one cup of water to make it a rinse that won't overly irritate one's skin, I tend to use #nofilter when it comes to the substance. The soy sauce dispenser makes for an easy pour and, fun fact, Kenji Ekuan, the man who designed it also designed the bullet train. Also available in Hello Kitty model.

Thus, decanting and relocating your products to suit your beauty, locational or, if you're like me, obsessive needs can help to streamline your beauty routine and help make natural items like vinegar and baking soda more accessible around the house (I also use such products to clean my tub). And yet, not only are such actions good for the body (like milk, just kidding) reusing our "vessels" is good for the environment too. So, enjoy!