Suffice it to say, cancer is an issue near and dear to my heart. I don't go on walks to find a cure or necessarily raise money but I do find myself drawn to whisperings as to how it can be prevented or items which may play a role in causing it. Such information is not actively sought out but seems to stand out against the noise of other information. I don't think I'll ever stop pushing William Li's TED Talk on people or feel comfortable putting a cell phone to my ear for an extended amount of time but lately, it's been my use of antiperspirants which have come more into focus.

Kind of like the opening scene in Lord of the Rings, I feel information on antiperspirants has come into my ear through whispers when I least expect it. I've seen information. It's interesting. It's gone. I forget about it. I think the first ever I heard that antiperspirants could cause cancer was in high school. I remember thinking the information was surprising (seeing as there were bottles of antiperspirant staunchly placed on my parents' vanity through my childhood) but something struck a chord with me. Indeed, like in Vanilla Sky, a doctor might tell me that such information on antiperspirants resonated due to the "iconography of my youth". It's a stretch but I remember the ban antiperspirant logo being ubiquitous in the household from 1984 onward. It was the first "beauty product" my parents threw at me and told me to use (read: the first product that made me feel like an adult) and its simple, bold colors stood out to a kid interested in art. So, I suppose my brain has trouble computing a strong brand loyalty with potentially hazardous consequences. Ergo, I decided to do some investigating... 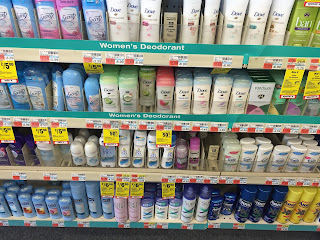 Color plays a large role in branding and you get a heavy dose of it in the deodorant ailse.


Looking at reputable sources like cancer.org and WedMD it seems a study was done some time ago which theorized that aluminum-based compounds which block sweat glands (and therefore sweat) in one's underarm region, would would naturally be absorbed by the skin and lymphatic system since it couldn't be released through the glands through which it came. Once in the body, research suggested that these compounds could enter one's DNA and change breast cells in particular. Since breast cancer is typically formed in the upper quadrant of the breast, a location close to where one applies antiperspirant, it furthered the theory that there was a clear connection between the two "items" above.

However, after further research, scientists took issue with the way the above study was performed as well as the claims it made. First, the original study looked only at women with breast cancer, citing that, "women who were diagnosed with breast cancer at a younger age said they used antiperspirant and started shaving their underarms earlier and shaved more often than women who were diagnosed when they were older," (cancer.org). While an interesting find, the study did not compare such women to a control group which did not have breast cancer. While I'm no scientist, I feel control groups are a key part of any experiment which are required for an 8th grade lab let alone professional research. Furthermore, scientists say that while some aluminum may be absorbed through the skin, the amount absorbed is too negligible to cause real changes in one's cells. The worst it might do is irritate your skin if the antiperspirant is applied to nicked, shaved skin.

So, while I feel safe using my ban on a daily basis, I have heard of some alternatives to antiperspirants which sound intriguing. I offer these not as an "in case" to guard against potential future findings on antiperspirants but more as information to arm consumers, in case Unilever ever gets too comfortable with its products... I mean, they've already created AXE bodyspray. Enjoy!

Water: I'm not sure how we ever arrived on the topic but in U.S. History class, our teacher once told us that instead of using deodorant, he drank water. While many students (including myself) seemed perplexed by this notion, he stated something to the effect that adult mammals (or was it animals?) don't need an antiperspirant if they drink enough water. What struck me as interesting was his emphasis on adult mammals instead of humans. It was the first time that I was exposed to the theory that, "yes, we're animals too" and function in much the same way. Indeed, all mammals are warm blooded and are able to, "regulate their own body temperature," (according to a quick Google search). Water, in fact, is a key tool in the regulation of our body temperatures as well as stress levels which can make our body perspire. While some sweat more and may need more water (or even additional antiperspirant) than others, drinking water provides such a myriad of benefits, it can't hurt as a sweat preventative. It can only help. 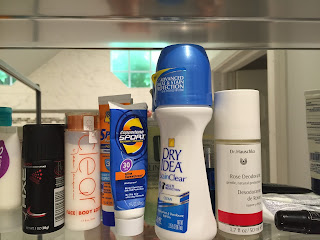 Rubbing Alcohol: According to Livestrong.com, most of our underarm sweat comes from our eccrine sweat glands. While the sweat from such glands is odorless, most people's underarms are chock-full of bacteria, which causes an odor when these two elements combine. Therefore, it's no surprise that rubbing alcohol can eliminate the smell (if not the sweat) from the situation above. I first came across the notion of using rubbing alcohol on Into the Gloss where and interviewee once claimed to apply it as an antiperspirant alternative. In this situation, Socrates' notion to "know thyself" comes into play. While I know I can't last an eight hour day without some form of antiperspirant (and maintain an amicable relationship with my co-workers), I try to use rubbing alcohol when I know I'll be putzing around the house for a few hours or even after I wake up if I've sweated the night before (dreams, people!).

Rose Deodorant by Dr. Hauschka: Much of my foray into the world of natural beauty has been helped along by the beauty website Into the Gloss. If a baking soda exfoliant is good enough for sophisticated Manhattanites, it's good enough for me. So it was here that I found my second alternative to antiperspirants in Dr. Hauschka's Rose Deodorant. While antiperspirants tend to block your sweat glands, inhibiting the excrement of toxins in the area, deodorants simply make you smell nice. Here, Dr. Hauschka's deodorant uses rose water to lend a sweet, natural fragrance while ingredients such as tapioca and lady's mantle keep sweat at a minimum. Indeed, in my research, I noticed that herbs, including sage and witch hazel could be used to stem sweat. Since sage is a natural astringent, "it has the ability to cause tissue contraction," (according to Livestrong.com). It is such tissue in the breast area which is often looked at in regards to cancer, so I can only imagine sage is an effective, natural alternative.

So there you have it: a few notes on antiperspirants and a few alternatives. Hope they help you make a decision that is right for you (and those around you).