I grew up with a mother who was a lot of good things. She was a good person, good friend, good nurse and she was sometimes a good cook. This being said, I can't say I learned too much about cooking from her. Perhaps our lives never intersected at the point I needed to learn to cook or perhaps, through most of my teenage years, we often ate outside of the home after my father became a strict vegetarian. On some occasions, she would cook a meal for family friends and it would always taste good. But whether my mother averaged five or three nights a week of cooking, she seemed to stick to her traditional dishes: fish with green beans, taco's (always at my request) or chicken, sometimes pasta. While these dishes were always "homemade", they were often doctored with Campbell's Cream of whatever or French's Fried Onions, etc. As, I've gotten older, however, I've learned that doctoring food does not always come in the form of processed ingredients. Most often, it's the simplest, most natural "additives" that make a dish go from basic to brilliant.

When I was a kid, I really liked parsley as a garnish. I suppose I saw it at restaurants and thought it was fancy. I think my whole life, I wanted to "eat fancy" until I started cooking for myself and realized that a four-star meal took, like, four days to make. This does not mean, however, that dishes have to be less healthy. All across the internet from the Food Network to Martha Stewart's site, short cuts abound to make meal preparation easier and/or quicker. Granted, these tips can help if you're cooking between your 9-5 and putting kids to bed but the time they save seems to be inversely proportional to the health of the meal they produce. While pre-made ingredients can be a time saver, jarred tomato sauces are often high in sodium, pre-made breadcrumbs can contain high-fructose corn syrup and almond milk contains very little almonds (in most cases). Ergo, I listed a few items I perpetually keep on hand to make my dishes truly homemade (and healthy). Enjoy! 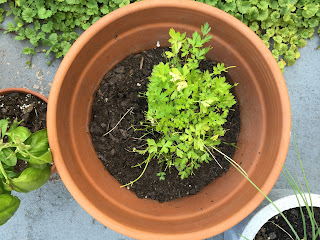 One good thing about being an adult: you can grow your own herbs and garnish away...

Note: While I often to buy food that is healthy and try to buy it on the cheap, a Vitamix blender is an expensive product that can change the way you eat. From helping to make homemade soups, sorbets and nut butters, it is a product that can truly bring "homemade" to the next level.

Almonds: Almonds have gotten a bad rap as of late with publications like Mother Jones fervently telling its readers to stay off "the sauce" due to its heavy reliance on water as a crop (according to the above site, it takes approximately 1.1 gallons of water to grow a single almond). Indeed, water is in short supply in states like California and, indeed, California produces 80% of the world's almonds. But others in the food industry, like The New York Times writer Mark Bittman, state that almonds are not necessarily the issue as is our reliance on California to be a producer of most of our foods. In this sense, Bittman advocates we return back to a style of regional agriculture where many states take on the "burden" of adding to America's proverbial "bread basket" (read the op-ed. here). It's a hotly contested debate but at the end of the day, I treat myself. I don't eat a lot of meat which also takes a lot of water to produce since something has to keep the grains and grasses a-growin' to feed livestock. And as a sometimes-vegetarian, almonds have become a source of significant protein, calcium and even magnesium which I've hear can regulate cortisol (read: stress) levels. And as claims have been made which point to the lack of almonds and high use of additives in almond milk (the Mother Jones article is featured here) making my own almond milk seems like a nutritionally dense and cost-effective way of getting my daily vitamins. Just cover one cup of almonds in water and let sit overnight. In the morning blend both the almonds and water (maybe add some vanilla) and enjoy... for about a week. 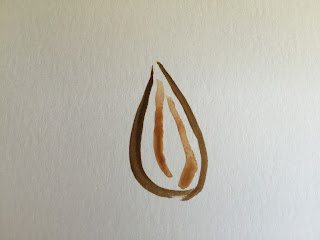 Canned Tomatoes: For something with a short growing season, tomatoes are a relatively versatile ingredient. They can be found in salads and sauces and lately, I've been using them as the acidic component in marinades (locavore movement, baby). Growing up, we ate a fair amount of pasta... a dish my mother made which I couldn't wait to get my hands on. However, I was always a bit disappointed she used the Ragu pasta sauce instead of Prego (I suppose the later's commercials were a little better). As I got older, I felt my independence blossom as I put jars of Prego into my shopping cart and as I got even older, I stopped using jarred pasta sauce altogether: not just because I limited my intake of pasta but because both sauces tend to carry a lot of ingredients unneeded to make a delicious, homemade concoction. In roughly half a cup of Prego or Ragu, one can find 480 milligrams of sodium which approaches a quarter of the suggested daily value. Compare this with 180 milligrams found in a can of peeled tomatoes and it's clear to see that homemade tomato sauce can offer an easy and healthy alternative to its pre-made competitors. A few years ago, I came across Mario Batali's recipe for tomato sauce and have been making a variation of it ever since. Simply saute half a diced onion in oil and add crushed, canned tomatoes to the mixture. As it reduces over medium-high heat, you can boost its nutritional value with chilies, oregano or even mushrooms (Batali's recipe calls for thyme and basil which are also healthy). It's a great way to add health to a meal with little effort and if you're super enthusiastic about homemade goods, 'tis the season to buy fresh tomatoes and can them for the winter.

Bread, crumbs: While bread, in and of itself, is not necessarily a "natural food" there is something "substantial" about it in the human mindset. We break bread to make peace with others and it can be found in virtually all cultures across the globe. When bread is done right, as it is in most (local) bakeries, it often contains simple ingredients and few additives. Pre-made breadcrumbs, however, are a different story. While some forms of Panko Breadcrumbs seem to contain relatively few ingredients, the fact they'd likely survive an apocalyptic event leaves me wondering what else is in there (the Huffington Post may actually have the answer). One look at regular, Progresso Bread Crumbs, on the other hand, and one can plainly see a list of over ten ingredients before one gets to those which comprise "less than 2%" of the mixture. To me, one of the nice things about bread is that its simple ingredients means it doesn't last long outside of the freezer, making it a perfect tool to use in an effort to fight unneeded preservatives in the diet. As bread begins to go stale, simply tear it into bite sized pieces and pulse them in a blender until the mixture attains a fine consistency. With the blender whirling, a window is provided for one to add flavorful and beneficial herbs such as dried parsley, rosemary, sage or even red pepper flakes (see link for chili peppers). To toast the breadcrumbs, simply toss in olive oil, and bake in a 350 degree oven until browned. Unlike, their Progresso counterparts, your homemade breadcrumbs might night last forever, but they'll last about a month and lend a crunchy and healthy component to any meal (you can find a more thorough recipe for bread crumbs here as well as one for croutons!)
Posted by Unknown at 9:27 AM