I attend yoga several times a week. At the end of each session, after and hour and a half of grueling poses which work your neck, your back, etc., you lie exhausted in what is identified as the most important pose in yoga: savasana. Savasana, also known as "dead body pose" occurs when you lie flat on your back with your arms out to the side and feet infront of you... much like a dead body might look. Lying in this pose, one is supposed to breathe deeply and, as our instructor reminds us, remain silent as this is the only time of day when some people can get time away and relax. I understand that yoga functions as most people's getaway, an oasis where they can free their minds of stressful thoughts and let their bodies explore the twenty-six postures of Bikram Yoga. This is not my shtick. Yoga makes me feel great afterwards but an hour and a half spent in a 109 degree environment is pretty much a torturous process. However, like I said, yoga is kinda like threading your eyebrows: the gratification comes post-process. So, as you can imagine, I was a little jealous of those who viewed their time in the studio as a "sea of tranquility." "Where was my tranquil sea?" I asked myself. As a person with high amounts of anxiety, I had my doubts that such a "sea" even existed. However, after awhile, I found I did indeed have my water-filled oasis right in my own home. Each day, my shower serves as my "happy hour."

While studying Anthropology in college, we learned that some Latin cultures were surprised to learn that, from an early age, American children slept in a room separate from their parents. In Latin cultures, it is typical for children to sleep in the same spaces as their parental units so, as you can imagine, there may have been some surprise towards the idea that children occupy their own space at night. "Children have their own room? But the parents sleep in there with them, right?" Is a quote I remember from an article on the topic. While, no, American and (oftentimes) European children sleep separate from their caregivers, there have been rituals which have developed surrounding this inevitable separation at bedtime. As children (and their parents) often develop a nighttime routine which involves brushing their teeth, being tucked in and read a story to prepare them to feel safe when left alone, I have too developed a nighttime routine to help me slough off the remnants of the day and prepare myself for a peaceful space before bed.

As I've gotten older, my nightly routine has become longer and more involved, not because my body calls for more moisturizer or serums or eye creams, but because I've learned the benefits of various skincare routines and, as I've leaned towards more natural remedies to help both myself and the environment I've found I need to "prep" a bit before heading into the shower (note: as a teacher living in a metropolitan area, I don't possess a bathtub so, unfortunately, these routines are "pre-shower" with the hopes that they will one day be "pre-bath"). Below is a typical, routinized list and description of my nightly routine. 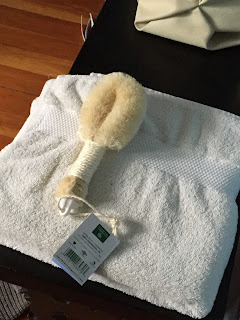 Dry Brush: Exfoliation, as I may have mentioned, is my new obsession. Whereas I used to exfoliate just once a month to spare my skin from harsh exfoliation beads, I now use more natural products which work just as well and are increasingly gentle on my skin. I just purchased a dry brush from Whole Foods. According to Livestrong.com, dry brushing satisfies the dual need for detox and exfoliation. Concise instructions on using a dry brush can be found here but, basically, using a dry brush involves moving dry bristles along your skin, starting with your extremities and moving towards your heart. While this action lifts dead skin cells, allowing new ones to come to the surface, it also moves one's lymph fluid through the body, resulting in the excrement of toxins. While not all medical professionals agree on this last point, the process is harmless and does leave your skin looking fresh and vibrant.


Baking Soda: On days I don't use a dry brush, I use baking soda as an exfoliant. Baking soda, I'm learning, is the duct tape of the beauty world: it can be used for anything. Plus, at 47 cents a box, who can say no to this miracle product? In order to "transform" baking soda into an amazing exfoliator, simply add a few drops of water to two tablespoons of the stuff and mix it into a paste. Massage it into your skin before rinsing and voila! This exfoliant works well on the body and is gentle enough to use on the face. I even use it in my hair as a cleansing agent after an article I read on (where else?) Into the Gloss. So far, this product has been good to me.

Honey: In my pursuit of natural beauty products, I stumbled across two elements which could be used as facial cleaners: oil, one the one hand and honey on the other. Not often used together, oil cleansing or a mixture of oils on the face could (ironically) work wonders for an oily skin type. However, after trying an oil cleanse which involved mixing oils (I used an olive/hazelnut combination) massaging oils into a dry face and then using a hot washcloth to remove said oil, I noticed my beauty routine began to extend out of the bathroom and into the kitchen and bedroom. For those of you who have read previous blog posts, I am a minimalist and thus, what I can't reach for in the shower does not generally make its way into my regimen. Honey, however, is a different story. Raw and Manuka honeys are both antibacterial agents and possess qualities which calm the skin making it useful in the treatment of eczema and acne alike. While some sources claim honey should be mixed with elements like lemon juice or glycerine before becoming a cleanser (you can access this recipe here) I tend to just massage the honey into my skin straight from the bottle before rinsing. Raw honey works well as a cleanser or mask since its thicker and will not run like it's Manuka counterpart. The results of this process have been positive, I feel good about using a natural product on my face and, as you wash it off, you have the added benefit of a sweetness no other cleanser can deliver.

Lavender Soap: Referring once again to the Best Beauty Tips section of Into the Gloss, I've read that placing honey on your legs and wrapping them in Saran Wrap before giving them a good rinse leads to limbs that are beyond smooth (if you have the time or inclination to do this, let me know how it comes out). However, I tend to save the honey for my face and use Dr. Bronner's Lavender Soap for my body. I was introduced to Dr. Bronner's very young from my neighbor who was trying to find her second career as a facialist. Besides reading all the quotes on stories on the exterior of the bottle, I enjoyed it's gentle scent and the fact that it could also be used as a bubble bath. As stated in Humour Me, I tend to possess high amount of anxiety, an "ailment" for which lavender can serve as a remedy. While I grew up using Ivory soap consistently, I was a bit tentative to use a gentler, liquid soap that wouldn't strip my skin with masochistic pleasure but, as I've begun to use baking soda as an exfoliating agent, I've found I needed a more moisturizing cleanser to balance out what could otherwise be very dry, exfoliated skin.

Vinegar: As stated before, I am as a teacher and, as such, have seen my fair share of baking soda and vinegar volcanoes. Having explained this reaction to students, as the baking soda with it's "basic" properties (it clocks in at 9 on the pH scale) combines with the acidic properties of vinegar (a 2 on the aforementioned scale) they work to "neutralize" eachother's properties and, in the process, create a great amount of fizz, eruption, boiling, whatever. I was a little concerned this same process would happen on my scalp if I washed my hair with baking soda and cleansed it with vinegar, however, once the baking soda is rinsed, it seems as though the vinegar acts as if nothing was there (this is good because the baking soda is supposed to really clarify your tresses). As stated before, I struggle with a flaky scalp and as I once forgot my dandruff shampoo on a trip, I quickly learned vinegar works as a great substitute and leaves your hair shiny and smooth.

There you have it. And since the bathroom of Isabelle Bellis seems to outshine mine, I'll leave you with what I imagine is a picture of her beauty sanctuary as well as some of her beauty advice. Enjoy! 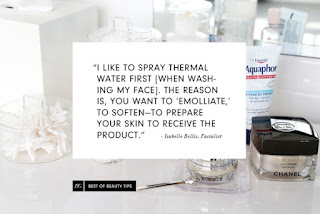