As many of you know, I head up to Connecticut in the summer to be with my fiancé. In doing so, I cross several states and somewhat of a hardiness zone. Gone is my ability to grow or access certain foods at the farmer's market but as they say, "when one door closes, another opens". While Connecticut may not have as many vineyards or olive oil manufacturers, you can grow a mean blueberry bush. To this extent, as I may have stated before, I'm curious about trying to cook summer meals with ingredients obtained only from Connecticut and Upstate New York. This may not present a huge change from what I eat locally in Virginia but I'm guessing it will present a change in the way I eat.

At the beginning of the school year, when I returned home from another summer in Connecticut, I began making lists of items I (ideally) wanted in my pantry. While I couldn't/wouldn't buy all items on my list, I remember having anise, nutmeg and cloves on the docket. While the summer doesn't often beg for such spices I associate with hot or holiday drinks, they seemed to naturally fall off my list as I began using more garlic, chilies (which can be substituted for crushed red pepper) cumin and coriander. To some extent, I began keeping items in my pantry that could be used in a marinade. However, as I move to Connecicut, I'm worried about how many chilies or even olive oils I can find that are locally grown. I've never been a huge fan of the Locavore Movement (eating healthy is hard enough in the United States) and this scheme to use locally grown food is not meant to act as an elitist judgement of foods from all over (although I've heard local foods taste fresher) it is simply an challenge to keep me occupied during the summer and allow me to explore the qualities of different foods. So, herein lies certain substitutions I'm thinking of using if I can't get some foods in Connecticut grown in Connecticut. 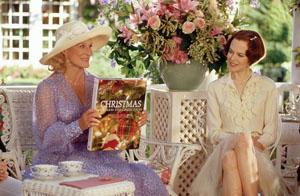 Direct line from The Stepford Wives: "I asked myself, 'Where would people never notice a town full of robots? Connecticut."

Substituting Tomatoes for Soy Sauce: I toyed with the idea of growing soy beans over the summer and using them to make soy sauce (which sees heavy action in my cooking). But while soybeans could be grown in Connecticut, making the sauce is prohibitively difficult. So, as I'm looking to explore the nature of foods and make substitutions accordingly, I'm think that tomatoes, with all their acidic deliciousness could be substituted for soy sauce in a marinade. While soy sauce is a favorite ingredient in marinades, I figured I'd need a substitute going into the summer. Since marinades often call for (about one) acidic component to (about three) oily components I figured throwing a tomato in a blender and thinning it with water might do the trick. To find great info. in regards to marinades, click here.

Substituting Walnut and Grape seed Oils for Olive Oil: I watched a TED talk the other day on antiangiogenic therapy which featured foods that could cut off the blood supply to cancerous cells, thereby limiting their growth. Grape seed oil was featured on the list. While I don't use grape seed oil often, I've been curious about working it into my culinary routine. As I've never been too keen on the flavor of olive oil, grape seed oil is tasteless. While I've often become frustrated by all the smoke emitted by olive oil, grape seed oil has a high smoke point. And while it's possible to get locally produced olive oil in Connecticut, grapes grow more readily in the region, which makes me think that locally produced grape seed oils may be easier to come by. In terms of walnut oil, walnuts are a product historically grown in the New England region. While it may not conducive to a marinade, I may attempt to used walnut oil as a dressing or finishing element for meat. Additionally, both grape seed and walnut oil contain polyunstaurated fats (good for your heart) as well as vitamins such as E and K respectively... reason enough to use them where you can. 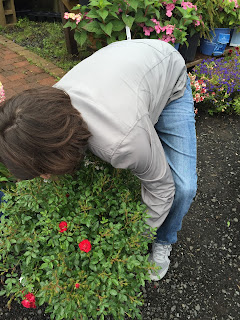 My fiance being very helpful with a rose bush.

Substituting Hibiscus Leaves and Rose Petals for Packaged Teas: One of my favorite articles on Into the Gloss dealt with how to make "beauty tea". While not necessarily in it for the beauty benefits, I noticed some of the ingredients lent themselves to calmer nerves or carried elements such as proteins and minerals which I didn't necessarily associate with tea. To be sure, the mixture for beauty tea seemed to be more of a "tisane" or mixture of herbs and not an official tea which contains leaves from the Cameilla Sinensis. While this "tea tree plant" is native to areas around Southeast Asia (and today's teas can be packaged in harmful, bleached bags) I figured I'd attempt to make teas or tisanes using ingredients native or at least grown in Connecticut. Two of these "teas" include rose petals and hibiscus.

While rose petals seem to be more conducive to beauty (apparently, "they tone the body from the inside out") I'm wondering how they'll lend themselves as a tea. Indeed, if they saying is true that we "eat with our eyes", I'm sure they'll taste delicious as an infusion in water. Hibiscus is used in Egypt to make Karkade and its flowers have also been used in medicines. Apparently, hibiscus has been utilized as both a laxative and diuretic and has been helpful in treating one's loss of appetite, inflammation or stomach irritation (according to WedMD). And while I strained to find dried hibiscus and rose petals at my local grocery store, the thought came to me that (OMG) I could simply but such plants at a nursery. So, with these plants in mind, I wanted to create a small recipe more hibiscus water. Enjoy!

I've read that not even bagged teas should be exposed to water when it's boiling. To this extent, brewing hibiscus leaves in cooler water is ideal. While the time it takes to steep the hibiscus may be longer, the flavor will be increasingly vibrant.

1. Wash off hibiscus leaves to enusre all dirt is removed. If you wish, gently release some "juice" from the leaves using a mortar and pestle.

3. Strain into a glass and enjoy!

Hope this recipe adds goodness to a good summer!