I came across a few things this week which relate to a few things I wrote about last week. The first "thing", refers to roses while the second refers to marinade. In Connecticut Diaries, I wrote about using rose petals to make tea. In addition to being a toner and good for your skin whether consumed internally or applied externally, the appropriately named Shiva Rose explained additional benefits of roses in an interview featured on Into the Gloss. Shiva Rose, who makes her home in Southern California, seems to behold the rose as the ultimate beauty product. According to the interviewee, "The rose is the queen of all flowers - anti-inflammatory, anti-aging, nourishing to the skin, balancing and heart opening." (You can read the full interview with Shiva Rose here.) To this extent, Shiva has parlayed her love of roses (and other herbs) into a beauty line which can be found at her website: The Local Rose. Here, one can access the power of roses in the way of balms, oils and candles. This site came as a blessing as I began to question my own efforts to live more off the land and less off Amazon. 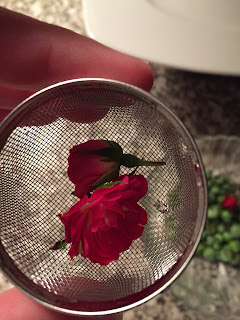 Ready to boil or to make oil.

And, speaking of living off the land, I also noted in Connecticut Diaries that, as I attempt to prepare food for myself and my fiance this summer, I am trying to do so with the use of foods grown only in Connecticut. This means that I had some difficulty finding tomatoes this week but, hey, I was able to try squash blossoms for the first time instead. Tomatoes figure importantly in my future cooking methods, however, as I plan on substituting them for soy sauce in marinades due to their acidic quality. Yet just as I thought I may be going over the cliff of the Locavore Movement into non-effective cooking techniques, I came across an instructional video for Bulgogi put out by the New York Times. The video, features a woman named Maangchi who the Times refers to as "YouTube's Korean Julia Child." (If you're into Korean cooking, don't hesitate to subscribe to her YouTube Channel.) In the video, Maangchi and Times columnist Julia Moskin build a base for a beef marinade using Korean pear which Maangchi claims, "creates a sweetness and tenderizes the meat." She also throws in onion and garlic as well as soy sauce to the marinade but all in all, I was glad to see I wasn't going overboard in trying to use fruit (instead of sauce) to break down the enzymes in meat. (Note: Laura Santtini also features a recipe using tomato paste in a marinade. That recipe can be accessed here.) 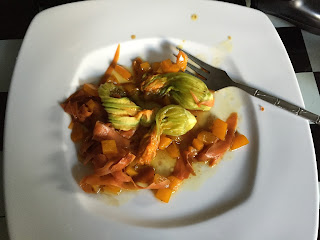