If you read this blog enough, you'll know that all of my ramblings are not particularly scientific. They're usually composed of one part History and another story-telling with some Science thrown in for good measure... a fine recipe in my estimation. But, for awhile, I've held this (non-scientific) theory that I'd like to throw against the wall and see if anything, quite literally, sticks.

My theory is that foods which are less healthy for you are more likely to stick to your plate, or whatever dishware you use (I'm often inclined to take-out boxes). This theory would be in opposition to foods that are "healthy" or as the Washington Post would label, "nourishing." I think I developed the theory in high school as I washed dishes at home, noting that the black bean sauce from my eighteen-hundredth meal of Chinese food took copious amounts of hot water to clear. Thinking about it, I noted that, water clears relatively easily from a glass, raw veggies come off a plate with ease but leave some cheese on a surface for an hour and that shit is gonna get sticky. So, like any good (semi)scientist, I've felt the need to experiment on this theory for quite some time... and what better time than a long, snowed-in weekend to do so. As Chris Tucker might say, "it's Friday... and I a'int got shit to do." 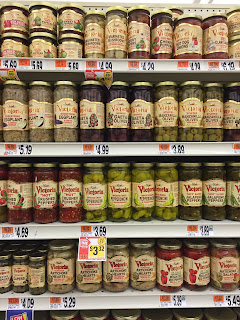 As any scientist would, I conducted a little research du background in order to adequately cast the elements of my experiment. In order to do so, I looked up a little information on them good ol' preservatives, a factor which I found common among many foods which did not want to part with the surfaces of my plates. A preservative, put simply, is, "a substance used to preserve foodstuffs, wood or other materials against decay." So, preservatives, while taking a variety of forms, can keep your veggies fresh and your wooden deck chair in good shape. And while both veggies and wooden chairs may have began as part of a tree, it seems preservatives may be a bit harsh in their ability to protect such a wide range of natural and man-made products. To use an example: while a Mossad agent could offer personal protection to either myself or a more visible, vulnerable world leader, it'd be overkill to employ one in my very boring, quiet life.. an ill mannered German Shepard would do just fine (at least it'd have a cuddly side). The same can be true of preservatives. Our jars of pasta sauce may not need as much protection against deterioration as our snow tires. But as I said, there are many types of preservatives.

While I wanted to focus in on one preservative for control, it was a bit difficult to do so. Ergo, I chose three separate preservatives which occur in many of the foods I consume: gellan gum, sulfites and sodium benzoate. While gellan gum is often vegetable based and used as a thickening agent in many non-dairy beverages (read: almond milk) sulfites can be naturally occurring or added to foods to preserve freshness. In some, sulfites (and there are a range of them) may cause allergic reactions which is why the mother of an old friend may have bought wine without sulfites when we were in high school. Sodium benzoate, however, is an additive used in many foods and, historically speaking, the topic of several controversies. Used in everything from sodas to salad dressings, the preservative was "under investigation" several years ago for its effects on hyperactivity in children. To some extent, it was found that when sodium benzoate combined with certain food colorings, it led to a marked increase in hyperactivity levels among the young. There had also been concerns that, when combined with Vitamin-C, the preservative could develop into a carcinogenic or cancer-inducing substance. Quite a lot for a little chemical. But I digress...
In order to conduct the experiment, I figured I'd use three groups of ingredients. Each group would possess a store-bought ingredient (containing a preservative listed above) and a homemade version without said preservative. I would begin each variable at the same temperature. After letting the substances sit in a generally controlled environment for two minutes, I would dump the contents into another bowl (no ingredients were wasted in the course of this experiment) and see how much material was left in the original vessel. I wasn't going to measure how much of each ingredient remained in terms of cc's or ml's or what have you, I just figured I'd eyeball it, and I'd let you do the same. 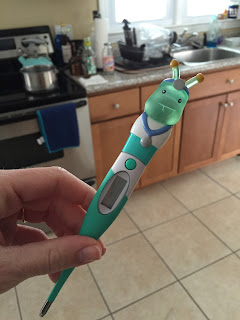 My handy-dandy thermometer which is about as scientific as I am.

I love almond milk, both the store bought and the homemade kind. But as I've been making an effort to eat in a truly natural sense, my body can feel just how much sugar the store-bought kind can actually possess. Almond milk, and dairy products, as a rule, tend to be on the healthier side when compared to most processed foods but they often do contain preservatives for freshness. According to The Vegetarian Resource Group Blog,  gellan gum (a thickening agent found in many non-dairy drinks) is considered to be vegan which bodes well for almond milk's target demographic. But, a preservative is a preservative (for the sake of this experiment). So, to begin, I poured half a cup of store-bought almond milk in a glass and half a cup of my homemade version in another (cover almonds with water, let sit, blend). I used glass vessels to hold both substances to further control the experiemnt (what can I say, I'm a control freak). When each substance had reached room temperature (70 degrees) I let it sit, and then tossed each "milk" into a bowl. The result: 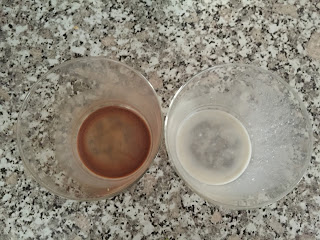 Both the store-bought and homemade milks seemed to leave nearly an equal amount of residue on their respective glasses. I'm unsure if this is because each product is mostly water-based which would lend themselves to cohesive properties but I suppose we can conclude (on my already shaky premise) that based on the amount of liquid which stuck to the glass, store-bought and homemade almond milks can be either equally healthy... or unhealthy.

2. Mustard
I love mustard. I think I learned I loved it at the same time I learned I wasn't such a fan of ketchup. I was at Ted's Hot Dogs in Buffalo, New York (this restaurant is really the only reason why I would suggest a trip to the city) and ordered a regular dog with mustard and onions. At thirteen, that's really the only type of heaven you can ask for and I think I never stopped loving mustard since. It's a good thing too because, speaking of foods containing hidden ingredients, the ubiquitous Hunt's brand of ketchup oddly contains a fair amount of sugar... generally four grams per tablespoon according to the website, Hungry for Change. But many commercial mustards are not so bad, although many contain sulfites. So, to continue my experiment, I pitted Martial Picat's Dijon Mustard against Melissa Clark's homemade recipe for grainy mustard. Just as with my various forms of almond milk, I brought each form of mustard to room temperature. Using my handy-dandy measuring tools, I placed a scant tablespoon of store-bought mustard into a stainless steel spoon and a scant tablespoon of my homemade version in another. With a quick flick of the wrist, I dropped each form of mustard into a bowl with what I felt was a similar amount of oomph (to be scientific about it). The result: 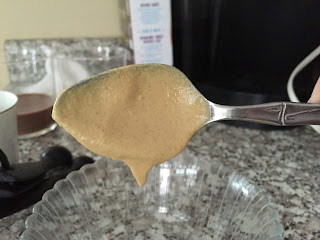 What remains of my store-bought mustard. 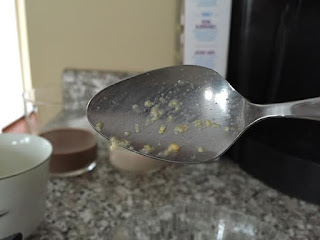 Homemade
In this case, my theory seemed to hold true. The mustard containing preservatives seemed to stick to the spoon. Full disclosure, however, the homemade version of my mustard called for white wine vinegar which I later learned to contain sulfites, so the jury still may be out in this regard.
3. Tomato Sauce
I like tomatoes but, as far as tomato sauces go, a lot of them contain preservatives (not the brand of Emeril Lagasse though, in case you were wondering). So, to this extent, I made a homemade sauce using Mario Batali's recipe and a sauce containing sodium benzoate. After both sauces reached room temperature, I threw them into a bowl and voila: 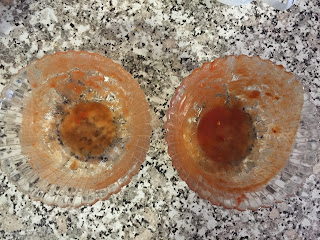 The sauce containing sodium benzoate (on the right) seemed to leave a bit more residue... although I'm wondering if I flicked it into the bowl with as much oomph as the other sauce.
So what does all this mean? It was an odd theory to start with but I think it holds up... that foods containing more preservatives, due to the findings of this experiment, are more likely to stick to their respective containers. Now we can all rest easy... until we see what these foods can do to our insides.