When I was recently on a yoga retreat in Mexico, I spent time around people who ate very well. Not necessarily in the conventional sense of rich dishes that would give one gout. Rather, most of them were vegetarian or tried to eat clean foods; good for both their bodies and the environment. It was here that I learned about the idea of pistachio milk. While explaining that I often made almond milk from raw almonds (see Homefaking) a fellow yogi introduced me to the concept of pistachio milk which I quickly latched onto due to my preference for pistachios over almonds (although almonds contain a fair amount of magnesium which can help regulate cortisol levels in the body). Several weeks ago, I bought some pistachios from the bulk-goods section (not wanting to pay the full amount for a full box of nuts) shelled them and covered the unsalted pistachios in water in anticipation of what would later be a delicious, blended concoction. While shelling said pistachios, however, I remembered a use for shells in the back of my mind. Was this memory associated with the coffee-ground scrub I read about on Into the Gloss? Could these shells be used for another purpose? 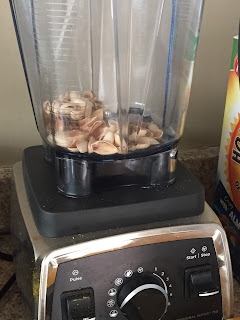 If you're a "person of a certain age" (like me) you probably remember your grandparents doing things in a more "natural" way (indeed, my grandmother cooked chicken soup from scratch- in four inch heels). Since trends often take some time to catch on (indeed, I've heard estimates as high as 4,500 years for the amount of time it took the Agricultural Revolution to catch on) and we can place the Industrial Revolution around the mid nineteenth-century, grandparents who were born in the 20's and 30's likely remember and grew up using more natural ingredients for what we now use anything made by Procter and Gamble for. I believe my grandmother was the one who suggested rinsing my hair with cider vinegar for added shine and indeed, star chef, Marcus Samuelson has been quoted as saying, "[my grandmother] would say, we're gonna do roasted chicken, the next day we're gonna do chicken soup and the third day, we're gonna do chicken dumplings". Such was perhaps the mindset of people who did not have three convenient grocery stores within the vicinity of three square miles. And, to some extent, I love this mindset. I love using the most of what I have. Mostly it's good for the environment but mainly, it's good for my budget. So when I found myself with a bowl-full of pistachio shells, I knew I could use them for something.

While I enjoy the "natural" mindset of yesteryear, I'll admit that I do seek help from contemporary tools. While our grandparents may have been reduced to mortar and pestles in their youth to crush ingredients, I am the now-impoverished owner of a Vitamix blender which could essentially blend a brick. Thinking that I would pulverize said shells into a "rough dust" that could be used for exfoliation, I quickly gave them a spin in my Vitamix, only to have them scratch up the blender's container and looking more like sharp shards at the end: nothing I'd want to get near my skin. It was at this point, I realized that I had originally read about using eggshells to clean residue off the interior of a wine decanter (see Tiny Vessels). Moral of the story... shells can be used as a natural cleaning product, just remember which one.
Posted by Eating Natty at 8:37 PM