I don't think my blog gets a whole lot of readership so it's likely safe to disclose that a "friend" lost her virginity to a song entitled, "Tiny Vessels" (in retrospect, another song should have been in order). But this post deals with the more intriguing topic of the vessels we keep our water in. Upon my return to Washington, I've been looking for inexpensive and natural ways to filter water. I remember seeing a large dispenser with volcanic rocks at a health-food store and was intrigued. But with its hefty price tag, I had to decline. Thus far, I've read of several methods for water filtration which don't require your standard Brita filters (which can sometimes contain chemicals in and of themselves). Some filtration methods are complicated (involving polymers) and some are not (involving sand) but at the end of the day, I figure that boiling water and letting it cool works just fine. To this extent, the question becomes not how we purify our water but how we beautify its presentation.

I've always had a thing for pitchers. I suppose that when I became and adult, I latched on to the concept of "formal dining" as a way to anchor what quickly became the chaos of adult life. Throughout my 20's, while I wasn't necessarily able to control aspects of the dating world or was confronted with conflicts at work, I could always settle in and use my fine China, decant my beverages and condiments into their appropriate containers and cook a good meal. To some extent, I agreed with the theorists who claimed cooking could take you back in time (where, in my mind, perhaps it was more peaceful). It was here that I started collecting pitchers. I took the ones my grandmother was willing to give away and looked for new ones online. As my tastes often ran towards pricey these pitchers often (and to some extent still do) remained safely secured on their respective webpages. But through my browsing, I feel as though I was able to distill a sufficient collection/wish list of pitchers. As Jennifer Aniston suggests, "keep a pitcher of water around your house to remind you to drink up." And if said pitchers be beautiful, all the better. 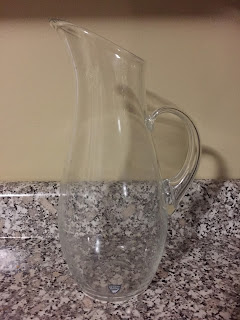 Pitchers, pitchers everywhere will hold your drops to drink.

William Yeoward-Classic Pitcher (4 quart): I spent a lot of time searching for pitchers online and while my tastes aren't so sophisticated as some that might justify a four-figure Christofle pitcher, I feel William Yeoward (who generally molds his creations from crystal) creates classic, and well made pieces. In my somewhat irrelevant opinion, he is the first name in glassware. His lines are clean and his prices, while expensive, are somewhat approachable to your average person who doesn't mind indulging in economic fantasy. His Classic Pitcher, to me, is a beautiful piece with enough space to hold a lazy-day's worth of water. And at the end of the day, it makes me happy to look at.

Simon Pearce- Barre Pitcher: Simon Pearce essentially produces glassware in Vermont and while his designs are a bit more bulky than those of William Yeoward, the Barre Pitcher is a beautiful creation with an elegant structure. Like the Classic Pitcher, it has clean lines but has a lip that seems to stretch beyond what regular proportion would dictate, much like a ballerina might stretch beyond where we would normally imagine. Just looking at the pitcher makes you want to take a barre class and, of course, drink water in the process.

Orrefors Sweden-Enjoy Carafe: Apparently, when Kevin Spacey holds a cocktail in House of Cards, he holds a glass from Orrefors "Street" Collection. My grandmother gave me my first Orrefors pitcher and I use it throughout the summer. I sometimes use it as a vase, I sometimes use it to hold water, I sometimes use it to make limoncello. Regardless of what I use it for, I like the way it looks and the Enjoy Carafe is no different. It's quite modern with it's lack of handle and asymmetrical design with a slight slant at the top making the entire design fluid. Furthermore, at $60, it's a comparative steal next to other pieces of glassware.

So there you have it: a few pieces to enhance your drinking experience. And while these pieces make me happy, water pitchers are like people: it's always what's on the inside that counts. So drink up and enjoy!