We're moving away from Independence Day, fun as it was. But that doesn't mean we have to move away from summer drinks. Unlike the whiskeys and bourbons of the winter, summer drinks call for cocktails which are light, sparkly and fun. It's time to experiment with the bounty of the season. While one might shy from the root vegetables of winter, berries and herbs available in summer offer a bounty of combinations for a new and cool spritzers. And while I'm not huge fan of berries eaten from a bowl, I love them in syrups which are versatile enough to lend themselves to a variety of alcoholic and non-alcoholic drinks. Syrups, which can be simple as dissolving sugar in water or contain and infusion of other ingredients can be made easily on your stove top in several minutes. Recently, I came across a mulberry tree in my finance's yard and decided to make a syrup which I then used to make a cocktail. Hey, it's summer. Enjoy...! 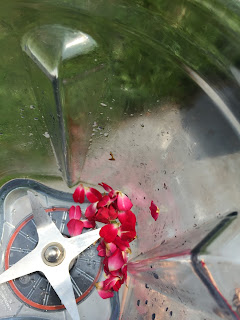 Collecting a few rose petals for a cocktail.

While I recently came across a mulberry tree, I also recently came across the fact its berries are edible. A tree growing outside my school was pointed out one day by a fellow teacher who said, matter-of-factly, "its berries are edible." (This fact was further supported by a class taken at Flower Power in New York.) The berries of a mulberry tree look very similar to a small blackberry and, while indigenous to many places, are often found in the the eastern U.S. Like blackberries, mulberries carry a significant amount of vitamin C but also contain the polyphenol (a group a plant compounds claimed to have antioxidant properties), resveratrol.

I first came across resveratrol in a TED Talk on antiangiogenesis (defined as essentially starving cancer cells from blood vessels which can bring blood and essentially growth to such cells). Within the talk, Dr. William Li, spoke about using food as a preventative tool to keep cancer cells away from blood vessels which would serve (no pun intended) as its food. Through his research, Li found a variety of foods which serves as, "inhibitors of angiogenesis" keeping cancer cells latent from further growth (truly, if you are going to watch a video this week, month or year, I'd say to watch Li's talk here). If you do watch the video, there is an image at 12:26 which hit me like a ton of bricks. The image shows two pictures, one with many blood vessels growing out of a single ring, another with only a few blood vessels growing. What Li says as these images arrive on the screen is that the second image shows a 60% reduction in angiogenesis (growth of blood vessels) after the addition of resveratrol. According to WebMD, resveratrol often does act as an agent which, "protect[s] the body against the kind of damage linked to increased risk for such conditions as cancer and heart disease." The substance has even been shown to treat obesity since, as blood vessels grow, so does fat. 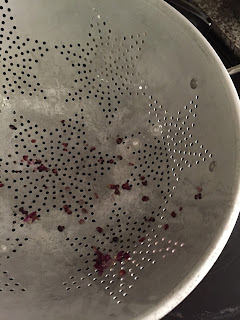 What's left of mulberries after being pushed through a strainer.

So, with all that scientific talk, I'm sure you're ready for a drink. Note that while mulberries are nutritious, in the following recipe, they are combined with sugar and mixed with alcohol (or not). The recipe below infuses mulberries and ginger into a syrup and then added to club soda along with St. Germain, an elderflower liqueur. I have been meaning to try St. Germain and, once consumed, I knew its, sweet, light taste would combine well the berries of summer. So, without further ado, below lies the recipe for Mulberry-Ginger Sparklers.


1. Mix ingredients in a glass with ice.

Mulberry-Ginger Syrup
makes 1 cup
1. Combine all ingredients in a saucepan and heat until sugar is dissolved. You can crush berries with the back of a spoon or leave them whole for a milder flavor.

2. Allow mixture to heat for about 5 minutes.

3. Remove from heat and let cool.

4. Strain mixture through a fine mesh strainer. Push through solids if desired.