At the end of my last post, I spoke about how I tend to be better at foraging than farming. Walking through a nursery today, I couldn't help but feel I was cheating if I didn't grow plants from seed. At the nursery, one can buy plants pre-grown, in a hardy state which, in my case, would make them more difficult to (unintentionally) kill off. Once you get them home and re-pot them, as the old saying goes, you just add water. While you may need to re-re-pot as time goes on, the process is quite easy.

In gardening, growing plants from seed takes a bit more concentration. Spacing the seeds in appropriate soil, watering them and keeping them at a constant temperature has proven difficult for me over the past few years. I suppose the responsibility of "bringing up plants" gives me anxiety and in turn, seedlings seem to wither and die under my over-watchful eye (which is probably why I'm waiting to have kids). Foraging, however, seems to yield little concern on my part ("The plants are already there. Why not take them?" I think.) And as I begin to find that plants can have positive effects on high levels of anxiety, I've tried to mix both foraging and caring for potted plants into my daily routine. 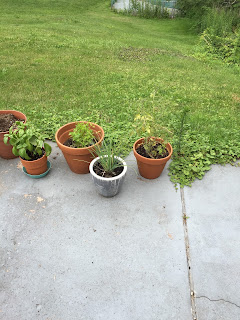 All my plants will tell you, I'm a lukewarm babysitter.

Recently, Into the Gloss released an article entitled Fill Your Bathroom With Plants. Noting that, "plants have been shown to boost moods, increase creativity, filter indoor air toxins, and produce oxygen," the article suggested several plants that would grow well areas with high moisture and low light (read: bathrooms in New York City). I agreed with the notion of using plants to enhance the "spa like" ambiance of a bathroom (see Happy Hour) but not wanting to purchase pre-grown plants, I thought about simply foraging for small bouquets in the great outdoors... or in my backyard.

Through some simple study and classes at Flower Power in the East Village, I've been able to identify some wild, edible plants which seem indigenous to my immediate surroundings. Mulberries, clovers and yarrow are just a few of the plants which can be found in a New England yard or city sidewalk for that matter and can be washed and eaten or made into teas, tinctures or vinegars. Noting my above predicament, such plants can also be gathered and made into a small bouquet for the bathroom or any other small space in your home. 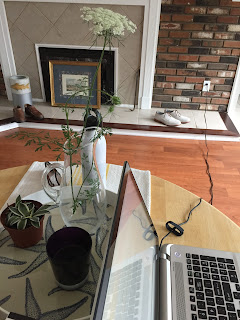 "Foraged" and potted plants, side by side.
So, below is a list of some "foragable", edible plants which can be found locally in the New England area and can second as a visually intriguing bouquet in any room of the house. Enjoy!
Red Clover: Red clovers are the pink, "puffy" flowers often found in a meadow or field. When I was young, I remember looking up to an older girl who was able to make flower chains with them. In terms of "edible-ness" and nutrition, red clovers essentially have flower tops which can be pulled from the plant and consumed. I often like to pull out the flowers and let them steep in white wine to add less guilt to my lunchtime beverage (in the summer). Historically, red clovers have been used to help remedy indigestion, or symptoms of PMS or menopause. It has also been used to reduce one's cough, asthma and bronchitis, according to WebMD. As somewhat of a defacto vegetarian, I also learned that the flowers of red clovers were a good source of protein even though I haven't been able to confirm this through other sources.
Yarrow: Mythology (and Wikipedia) tells us that the Greek warrior Achilles had his soldiers use yarrow as a means to staunch blood wounds, thereby giving it the Latin name: Achillea millefolium. The "millefolium" in the above name translates to "thousand leaves" and, indeed, the leaves of the yarrow plant are many and tiny. This is one way in which I'm able to differentiate it from lookalikes such as water hemlock (which is toxic) and Queen Anne's Lace. Visually, in addition to having "a thousand leaves", yarrow plants also have light-yellow flowers which seem to grow out in concentric circles with many flowers forming one bunch and with said bunches forming the entire head of the plant. Like red clovers, yarrow is primarily used to make medicine. Native Americans used to chew the root in order to induce sweating as yarrow can be helpful in breaking a fever. Yarrow can also be placed in the bath or in tea to aid with cramps or intestinal issues respectively.
Any long stemmed plant: If your goal is to simply have plants in your house, they obviously don't all have to be edible. Simply cutting the stem with its attached leaves off a plant in your yard can add a sophisticated addition to any area of your house. Plus, it's easy and free!
So, if you're worried about your green thumb (or lack thereof) foraging plants from your surroundings is a low maintenance way to enjoy their benefits without the consistent upkeep. Plus, when new plants are needed, simply compost the old ones and continue the cycle of life. Hippie life. 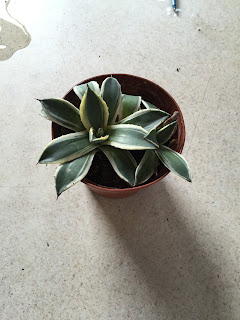 If you do have a black thumb and don't want to forage, succulents are an equally low-maintenance option to go with.
Posted by Unknown at 3:43 PM