As I move more deeply into the health food movement, I've been tempted sprawl my interests into the arena of gardening. I've wanted to do this for several reasons. One, as my tastes have focused on beans and dark, leafy greens, I've thought to myself, "I can grow that." And two, I thought growing my own food would save some cash. There are a lot of "green things" at play here: foods, monies, etc. The only thing that's not green, is my thumb. 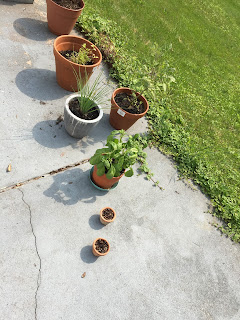 How does your garden grow?

This spring, I sent away for dozens of seeds from Happy Cat Farms in Pennsylvania. My order consisted of Kentucky beans, Roma tomatoes and hot peppers which I was excited to start from seed. I was even wondering what I'd do with my bumper crops. "Maybe the neighbors would like some," I thought. However, entrusting the seeds to my busy fiancé was my first mistake. Long hours and an understandably lukewarm attitude towards my adventures in home-growing yielded little care for my plants which in turn yielded little growth. Enacting plan B, I subsequently decided to buy some pregrown plants from the farm next door. This was my fiancé's argument all along: "We live next to a farm. Let's just buy plants/food from them." But I was stubborn until I realized that, really, gardening is not my thing.

Whether it's a revolt against big business or simply a can-do attitude, the homemade movement is gaining trend in the United States. Just looking at the Williams Sonoma website, one can buy anything from a chicken coop to DIY cheese making kits. I remember thinking my uncle was quite odd when he started brewing his own beer in the early 90's. Now, such an activity is the pastime of the masses. Indeed, I've heard of folks in Connecticut who possess goals of growing and subsisting on food from their property alone. It's likely no coincidence that they tend to have chicken coops the size of an average starter home and (I assume) a staff to match. Such people, however, tend to fall into the category of "job creators." While I despise the political connotations of such a term, it's true that many such people work in New York and oversee large amounts of employees, assets, etc. While this notion may seem politically charged, for me, there is not much judgement here. Beyond economic notions of producers, consumers, etc. I recognize that there are, to some extent, alphas and betas. I, through some self analysis, know I'm a beta and like to work for praise rather than oversee the work of others. While our economy seems to reward some forms of work over others (which is an argument for another time) for now, I live in the reality of knowing that with the combination of my (un)green thumb, staff of one and small amount of land (and income) it's likely better that I buy my food instead of produce it. For me, this is a good thing. While I'm no seasoned scholar of the economy, I sometimes worry about my lack of contribution to it. Such lack of contribution is not only due to limited resources but towards a general malaise for material things. Granted, what I do buy, I often can't afford but nonetheless, I worry about my lack of cash flow in the local and larger economy. I don't buy a lot of food, I don't buy a lot of clothes, I don't even own a home. This is where my production and consumption of food strikes a balancing point. While I do like growing food my own, I recognize that for me, spending my money on local food grown by producers who are better at the task and stake their livelihood on it is a way I can contribute to the economy in a way I see fit. While I was dismayed in high school when my teacher told us that to be a responsible citizen we only had to vote and watch the news, I'm quickly learning that where we spend our money contributes to a collective voice which states what we value and what we want to see change. For me, I can feel good about throwing my support and money behind local farmers who use sustainable methods to grow something we need. It's my contribution both monetarily and idealistically. However, I still like to try my hand at gardening here and there. Below, is what I like to grow and what I like to buy. Enjoy! 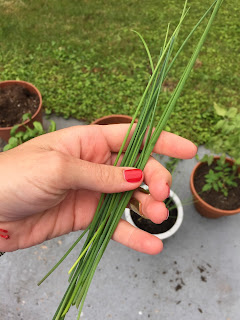 Chives: I realllly like alliums. Garlic, onions, shallots are something I generally look to use in every dish I make. Chives, therefore, function well as an easily grown herb which doesn't take up too much space. As I stated before, I haven't found much luck in growing items from seed, so purchasing garlic or onions in February to grow in March and transplant in May would probably go poorly for me. Furthermore, with my lack of a green thumb, I'd likely not receive a high yield of the above plants. Therefore, I tend to but my garlic and onions from the farmers' market but keep chives on hand to add a little "onion-y" flavor to a dish.

Basil: My friend gave me a basil plant before moving back to Indianapolis and, while it's an herb I haven't used much of before, I find I'm using it a lot in the summer. The obvious choice would be pesto, which I make but I also like to make a basil oil which adds a bit of nuance to a dish. Furthermore, basil is relatively sustainable and doesn't need as much of a watchful eye as larger plants might.

Beans: For me, growing plants whose roots grow into the soil is a pointless venture. While I get excited about growing my own plants, I don't know or, dare I say care, enough about the soil to produce strong, healthy plants. I'm too lazy to really till the soil and too cheap to buy a raised bed, so if it can't fit in a small pot, it'd better grow up rather than down. Beans are great in this scenario. While they start from seed, they can be simply placed in the ground in June (in New England) rather than grown and watched over in a pot from March to May. After simply weeding and tilling the first layer of soil outdoors, I was surprised at how quickly my bean seeds sprouted and began to grow upwards. To me, they are a daily reminder that we can all grow something. 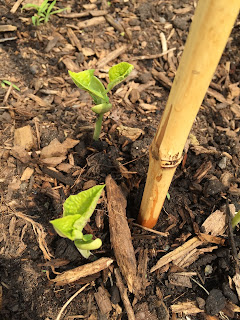 Beans, beans, they're good for your're heart (and agricultural confidence).
Foods I buy...

Tomatoes: Since, as stated before, I'm not skilled at growing things from seed and my pregrown tomato plant is not yielding much fruit, I find myself buying them from the farmers' market. If you do have somewhat of a green thumb, however, this is a crop I'd recommend trying out since such gems are not available at the farmers' market until mid-July.

Onions and Garlic: Although I currently have garlic seeds in my kitchen, I missed the growing period and now buy them at the grocery store along with onions and scallions. These are also readily available at the farmers' market and something I tend to leave to the experts since the "fruit" of the plant is rather large and therefore (in my mind) left to competent individuals.

Meat: Obviously, I don't have the land, resources or wherewithal to raise livestock.

Note: While I'm not the best farmer, I feel I'm not a bad forager. While I don't have the "O" blood type like our prehistoric forefathers who hunted and gathered their sustenance, I've found that after a few short classes, I'm able to identify a few basic plants which are edible. I would not recommend doing this unless you truly know what you're looking for but for anyone looking to learn more on the subject, Identifying and Harvesting Edible and Medicinal Plants in Wild (and Not So Wild) Places is a good place to start. The New York Times came out with a cute article as well entitled: Salad From the Sidewalk. The (somewhat anecdotal) article is complete with charming illustrations that, if anything, are pleasant to look at.