Back around the time in which I read Vogue was not surprisingly the same time in which I could dick around and had a greater amount of discretionary funds (a.k.a. high school). And as my mom had always allowed me the liberty to make big fashion faux-pas when I was younger (big globes of sparkly earrings in third grade, shiny Vans in seventh), I finally found a stride in high school after "falling off the bike" numerous times. In this regard, I became a bit miffed when I saw "high-low fashion" was the next big thing (at least in '99) as it had been my game for awhile. And while I wasn't pairing Gap t-shirts with Armani skirts as they claimed was fashionable in Vogue, I generally played some variation of the hobo look from the waist up and the "I might care" look from the waist down before going full on "no-shits" in college. But as my fashion tastes have evolved and are even returning to something in the range of formality (gray hair has to care), I've found that it's always nice to have a small piece which tells the world, "I haven't fully fallen off the bike even though I'm in pajamas." And so, as summer rolls around and we (hopefully) all relax a bit more into our respective summer uniforms, I like throw on a small piece of jewelry in a general nod to being human. They don't add heat to your ensemble and can generally pair well with what's pared down. A few of my favorite pieces and designers lie below. Enjoy!

Alighieri: While I still don’t have time to read much (and generally don’t like to), when I do read in the summer, I've found I really enjoy the writings of female authors. While The Da Vinci Code will always go down as my favorite tome in a nod to my uncultured tastes in literature, I always liked how my favorite female writers seemed to speak in another "code" that could easily be translated by “nasty women” (a.k.a. those who fights their own battles). And as anyone who engages in battle knows: you’re gonna need some armor.

The act of mining, in both its real and symbolic forms, is risky business. In either circumstance, traveling or digging deep below ground indicates a dive into the unknown where various dangers and challenges await. And while the actual practice of digging up rocks brings about many physical and economic hardships as we've seen through history, scratching the surface of one's life takes a bit of boldness as well. But it's only underground that we generally find these precious stones and/or rewards for our efforts. And so, in some symbolic and real sense, there are those who pay a great price to have stones mined for them and those who mine and find their own... and, in the process, may learn that the journey to find said jewels is more important than the stones themselves.

In an ode to those who undertake their own journeys, Alighieri jewelry is inspired by stories from the Divine Comedy in which Dante takes an uphill journey from the Inferno to Paradiso. Artfully composed and unadorned with anything ostentatious, Alighieri jewelry reminds us that it's not so much prize but the journey towards it which matters.

Temple St. Clair: In reference to The Da Vinci Code, protagonist Robert Langdon is often able to identify signs and symbols that have been passed down through generations in an attempt to protect the “divine feminine”. And such symbols, once I learned about them, seemed to show up everywhere. So when I noticed that St. Clair (anglicized as Sinclair) was a significant family that figured in this book, I started looking at some of the jewelry in a different way and, indeed, some of it seems to reference famous symbols (if only in my head). 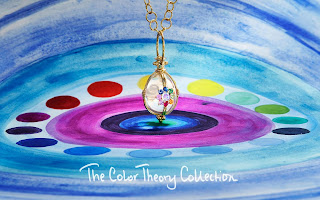 There are obviously many symbols in the symbolic diaspora but it seems the simplest ones are the most common or powerful and some of these symbols (colors, shapes, etc.) seem to be reflective of nature itself. As most symbolism concerns itself with life and death, the egg is a big one when it comes to fertility... and a significant shape in the St. Clair jewelry line as seen above. But while the St. Clair name in the book seemed to be synonymous with protecting a sacred bloodline (symbolized by the egg), their jewelry line also contains pieces entitled "amulets": one of the original purposes for jewelry to begin with.

Long before jewelry became purely decorative, jewels were used in talismans and amulets as a way to ward off evil or bring good luck. Indeed, in Californian culture, we see a hearkening back to the use of crystals and whatnot to bring about a sense of powerful energy. And whether such ideas are woo-woo or real, the point is is that jewelry used to be a symbol that could protect rather than show one's status. It was something you brought into battle... 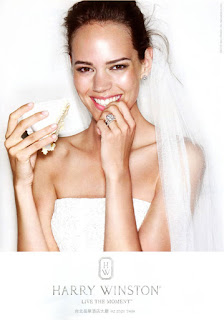 Circling back to Vogue and symbols, I remember coming across an ad for Harry Winston during my more fashion-focused days in high school. In the ad, a young woman stands smiling at the camera, her left hand heavy under the weight of an enormous diamond. Even as a high-schooler, it didn't take much worldly sense to recognize the message being conveyed. She was young, she had married well and it all seemed to fall in her lap as her child-like giddiness might convey. But, in my view, one could also see the lack of control that accompanies good fortune. The balance of work and reward is dismembered and one doesn't seem to have dominion over either end of the coin. In this regard, it would seem to me that women who "mine" for their diamonds and the jewelry designed for them eschew ostentation. One has to travel light for the journey...

As you set out for Ithaka
hope your road is a long one
full of adventure. Full of discovery.
Laistrygonians, Cyclops,
angry Poseidon - don't be afraid of them:
You'll never find things like that on your way
as long as you keep your thoughts raised high,
as long as a rare exciement
stirs your spirit and your body.
Laistrygonians, Cyclops,
wild Poseidon - you won't encounter them
unless you bring them along inside your soul,
unless your soul sets them out in front of you.

Hope your road is a long one.
May there be many summer mornings when,
with what pleasure, what joy,
you enter harbors you're seeing for the first time;
may you stop at Phoenician trading stations
to buy fine things,
mother of pearl and coral, amber and ebony,
sensual perfume of every kind-
as many sensual perfumes as you can;
and may you visit Egyptian cities
to learn and go on learning from their scholars.

Keep Ithaka always in your mind.
Arriving there is what you're destined for.
But don't hurry the journey at all.
Better if it lasts for years,
so you're old by the time you reach the island,
wealthy with all you've gained on the way,
not expecting Ithaka to make you rich.

Ithaka gave you the marvelous journey.
Without her you wouldn't have set out.
She has nothing left to give you now.

And if you find her poor, Ithaka won't have fooled you.
Wise as you've become, so full of experience,
you'll have understood by then what these Ithakas mean.