Au Naturel (a.k.a. The New Morality)

When I graduated college I was gifted Extremely Loud and Incredibly Close by Jonathan Safran Foer. While I liked the book, I remember it being a bit wordy. There were words written by characters on scraps of paper and words that didn't need to be said. In general, I hate writers' emphasis on words in that many think words-as-art is the greatest thing ever. I remember an English teacher almost moaning with pleasure over an author's use of a single word. I remember an article by a girl whose writer-parents would debate for hours about the right word to use in a poem and I remember the stupidest (separate) poem ever devoted to the actual shape of letters involving some bullshit about how "b's" have a straight and delicate back. Being a minimalist in all aspects of living, I like everything streamlined from my choices in design, to my communication, to the way I eat. It's both a lifestyle preference and economic reality: focus on what's essential and forget what isn't. And so flowery language (and fabric) drives me up the wall. The point is: humans got on for a long time without written language. At a time when we were hell-bent on survival, one might say there was little time to develop a written language and apply it to large books dedicated to writers who liked to hear themselves speak (or think). In this sense, while there were probably stories told around the campfire, language served as more of a vehicle for practical communication which it generally still does today even if we're conversing about workflow. But in regards to Safran Foer's other work that I'm reading (entitled Eating Animals) it got me thinking that there is likely something to studying the way we lived before writing and (obviously) before written history... a time when we were the ultimate minimalists.

While I'm not super into Prehistory (I'm more of a medieval girl), I always found discussions of it interesting in my Introduction to Anthropology class. At a time when I was learning about sexism and institutional racism, it was interesting to find that hunter-gatherer societies of old were generally equitable. Men and women worked the same amount (about 20 hours a week: not bad) and generally held the same standing in society. It was interesting to learn about development of primitive (read: non-institutionalized) religion which seemed to correlate greatly with death and the hunt and, as I got older, it's been interesting to find that we were a bit healthier (at least in the realm of oral health) as "cavemen".  But I took these classes (anthropology and Interdisciplinary Social Science) because I was indeed a Social Science major... because my parents thought a major in history alone was relatively useless. As such, we delved into all seven social sciences (psychology, anthropology, geography, sociology, political science, economics and, of course, history). While we scratched the surface of each topic, there was discussion that economics would likely leave the group as it was often associated with business and math and the left-side of the brain. But as I've gotten older, I've come to see that economics is what drives a lot of our choices as individuals (psychology), groups (sociology) and certainly as societies and cultures (history and anthropology). It has to do with the geography of where we live and it likely has to do with how were order our political structures (it certainly seems to drive political policy). So, in the end, it seems like these seven kingdoms are untied after all (which, ultimately, is what I think I was supposed to learn as an undergraduate).

As we learned in psychology, Abraham Maslow developed a hierarchy of needs around 1954. And while I should have probably been more critical in my thinking in college, I pretty much accepted the theory in that it seemed (and still seems) to be relatively intuitive. In economics, we learned that the subject was not so much about money in its physical form but, "the production, distribution and consumption of goods and services," (I had to look it back up on Wikipedia). As such, knowing that humans had a primal need for food and developing systems and policies as to how it might be distributed became a bit more interesting. But beyond the intertwining of how we get our needs met, there seems to be a bit more symbiosis between economics and the other social sciences than meets the eye.

After college (and probably after I read Extremely Loud and Incredibly Close), I picked up Adam Smith's The Wealth of Nations. As a minimalist, I like to read the big tomes of a subject instead of getting five books on the nitty-gritty of a topic. And Mr. Smith seemed to be the ultimate pragmatist, writing in a clear and coherent form without getting too emotional or subjective. But Adam Smith published his magnum opus in 1776 at a time when the world hadn't fully passed through the wringer of industrialization, much less the Information Age. As such, economic realities were based in small towns where people generally knew each other and had to look each other in the eye/see them at church if they had provided a bad service or item to a customer. And so this combination of empathy and economics is what (finally) brings us to our main point about how we live through the surface-level and deeper changes in history.

While cooking is not found in the realm of social science, we do need food to survive (as shown by Maslow). It need not be five-star cooking but a five star chef is a person who got me thinking about the nature of eating animals before Safran Foer. For my twenty-seventh birthday, I was given The French Laundry Cookbook by Thomas Keller. As I couldn't really make any of the recipes in the book (even if I had the ingredients), I took to reading the stories in between the instructions. In one, Keller told of how he developed a chagrin for food waste after having to kill rabbits for dinner. In his own words, Keller claims:


I don't know what I expected [killing rabbits], but there I was
out in the grass behind the restaurant, just me and eleven cute bunnies,
all of which were on the menu that week and had to find their way into the
braising pan. I clutched at the first rabbit. I had a hard time killing it.
It screamed. Rabbits scream and this one screamed loudly. Then it broke
its leg trying to get away. It was terrible. The next ten rabbits didn't
scream and I was quick with the kill but that first screaming rabbit not only gave
me a lesson in butchering, it also taught me something about waste.

Keller goes on to state that a primal connection to our food goes beyond what we might experience at the grocery store. It's not that we have to slaughter our own livestock but the trend is that the further we get away from our food, our customers or purveyor of goods or our political opponents, the less we're able to make a connection. While this may seem obvious, that primal interaction between the food we hunted as cavemen or the exchanges between community members in the time of Smith was underpinned by a social... something. In psychology, Antisocial Personality Disorder is defined by a lack of empathy or the ability to harm others without a sense of remorse. Indeed, some studies have shown that connections between areas of the brain associated with empathy and those associated with anxiety are a bit looser in those with the disorder. But the vast majority of us who feel sadness at the suffering of others or found it difficult to get through Don't F**k With Cats can begin to lose touch when we literally lose touch. Despite the great technological advances we've made over the years, life is still a sensory experience where information is somewhat gathered through sight, sound, taste, touch and smell. And while we may not rely on them for survival as much, their abilities to provide us with social information is still visceral as demonstrated by me telling you about a kitten with gray fur and viewing the picture below: 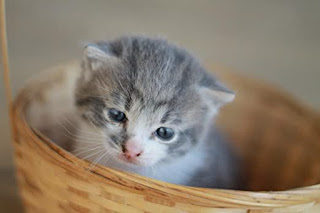 When we don't hear or see the reactions of others, it's easier to cyberbully, get a bailout and spend it on stock buybacks instead of taking employees off furlough (a la Ruth Chris) or run your company like United Airlines. So although we say it children around the holidays, it may be justified to remind adults that, "seeing is believing." And in this time of coronavirus, a silver lining may be that we see some of the unseen workers in our daily lives: the clerks in the grocery store or our mail carriers and, of course, our frontline medical workers. And when the time of coronavirus code-red drops down several shades on the electromagnetic spectrum, it may serve us well to know where our food is coming from. No one wants another outbreak, right?