At the end of college, I bought myself The Art of Imperfection, knowing it was what I needed in my life. After a five-year stint in undergraduate and graduate school, perhaps I knew I was poised on a precipice where I no longer needed my parents' funds (ha). In short, I knew I could  up... be imperfect on purpose. But as knee-deep in imperfection as I would get, the book itself opened a gentle gateway towards the notion, offering photos of old trees with gnarled branches that twisted this way and that. Quite an unmanicured debacle. But, as the quote underneath the photo read, nature does not much care for where it goes... or something like that. What may have looked disorganized was in fact interesting and unique. And it's nice to know that nature does not care much about what we think. Perhaps that speaks to a greater truth about ourselves. Anyways, I digress. What I meant to talk about was flower arranging, or, more aptly in winter, twig arranging... those stems which take the long-road to perfection, twisting and turning this way and that. Sometimes, that is how life goes.

I don't know much about flowers but I've started to like natural things indoors (and unnatural things like Glade plug-ins to be outside of the house, in the garbage). And winter provides the perfect opportunity for a beginner like me to feel less pressure when working with the limited options of the season. So while I may learn more about the topic in preparation for spring, we'll ease ourselves in with a winter crash-course on "flower arranging". Enjoy! 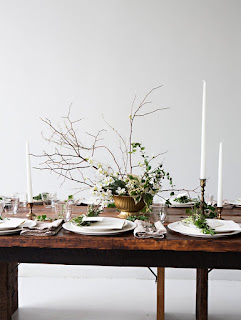 Sight: As far as I can tell, flower arranging is a bit like cooking where sight and smell are the primary senses engaged. According to professional flower arrangers, the use of negative space in minimalist or sparse arrangements can be a point of interest but instead of looking at the spaces in between branches, I find that nature usually delivers in the shape of the branches (or twigs) themselves. As we learned in yoga training, "every-body is unique" and the same is true of branches... each with their own small faux-pas. So whether its a large flower arrangement at the Plaza or a few simple twigs arranged in a glass, there can be a unique fondness for nature brought into the home. The difference is that with small branches in winter, one need not necessarily sever them from their source as they would with flowers. The benefit of the season is that such branches have already fallen, waiting, perhaps, to be reused.

Smell: While sight seems to be a key point in any arrangement, smell is often employed as well... usually without the downside of allergies when working with hardier plants. Where winter reigns, plants within the family Pinaceae, mainly fir, cedar, pines and spruces (among others) present a pleasant if not strong smell reminiscent of the holiday season. And while such scents are included in cleaning products that sanitize everything from your home to your hands, such goods are often chocked with fragrances, chemicals and other synthetic components that can act as hormone disruptors, etc. A'int nothing like the real thing, baby.

So how do we create a simple winter arrangement? Like many things minimal, we can look to the Japanese where I've heard exist sound minimalists (people who chose to actively surround themselves with minimal noises) to your more minimal ascetic found in now stateside stores like rikumo (highly recommended). It is here that the art of Ikebana or Japanese flower arranging has been employed for centuries. According to Ikebana International: 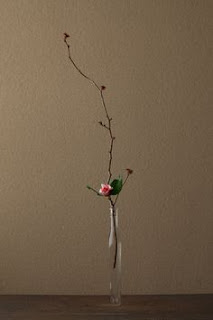 In Japan, something from the outdoors is usually brought within (the home or car) and "[t]he Japanese have always felt a strong bond of intimacy with their natural surroundings." And, of course, if you wish to leave nature entirely outside the home you can practice the art of forest bathing or Shinrin-yoku (also fashionable in Japan). But if you wish to create a small arrangement for the holiday table or your own enjoyment, a few tenets lie below.

1. Choose your vessel. This is where I like to go a bit exquisite in contrast with the simple arrangements to be employed within them. Of course, like anything, I do like my vessels minimal but classy (see Tiny Vessels) but really, any mug, vase, or pitcher will do... as long as you like it. :)

2. According to Marcia Gay Harden (by way of the Martha Stewart Show), the art of Ikebana employs tall, medium or short elements or, specifically, elements of "heaven, Earth and man". In this sense, when collecting materials, be sure to look for a variety of heights in the elements around you. Of course, you can always cut them (underwater) because...