The prefix "micro" seems to be having a moment, lately. We see micro-greens on the menu... and maybe that's about it but "micro" is at least having a moment in my own mind. In Kate Hudson Sucks, I spoke about minor adjustments which can make or break a posture (or limb) in the world of yoga. To demonstrate, within the vinyasa series there's a pose entitled Warrior I in which I'm constantly trying to square my hips (a.k.a headlights) towards the front mirror. It's a minor movement (if not a painful one) but once the adjustment is made, it creates a domino effect whereby my other limbs and appendages begin to align... allowing me to move deeper into the posture than I may have been moments ago. In short, these micro-movements, when done at the right time, in the right way, seem to be greater than the sum of their parts. And this is not only true in the world of yoga (although that seems to be the only world I'm inhabiting at the moment - g d teacher training). As I've found, the slight movements, choices or ingredients we work with can have a greater effect on our health than their size would otherwise indicate. And so, I've brought together some small things which I find make significant difference in how I feel. Enjoy!

Yoga: Of course we start with the world of yoga. What else do I think about these days? However, there are some movements which can make anyone feel better. Indeed, they're small but, as stated above, they can at least put us in touch with our bodies... a communication that can make a large difference in how we begin to treat ourselves. There are a few movements I like to (or am instructed to) engage in over the course of a yoga class which work to help my alignment and thereby body as I move forward into the day.One simple adjustment lies below.

Spiraling your Pinkies towards the Mirror: I've just come out of a vinyasa teacher training which is a far cry from the world of Bikram. The movements are different, the mode of instruction is different and the amount of heat pumped into the room is very different. And whereas Bikram yoga asks one to focus on alignment, vinyasa's entire focus seems to be concerned with the issue... consistently instructing students to stack their knees over their ankles, their shoulders over their hips and so on and so forth. One instruction which I've found particularly useful is to spiral one's pinkies towards the mirror (in front of them when lifting their arms over their heads).

In vinyasa yoga, one places their hands (or arms) over their head quite a bit. It is here that, when one spirals their pinkies forward, they allow their shoulders to relax a bit more. If you'd like to try, simply raise your hands straight over your head with your palms facing forward. Then, spiral your pinkies forward, allowing your palms to face one another. It may take a moment but you'll likely feel your shoulders drop down your back. Of course, you may not be engaging in yoga poses throughout the day but it's a gentle reminder that our posture matters, not only for aesthetic purposes but for the sake of our own bones and muscles as well.

Ingredients: During a recent tutoring session, I offered a clip from The Sword in The Stone in order to communicate the concept of the trickster in literature. In the clip, Merlin and (Mad) Madam Mim square off in a battle of strength and will in a fight for Arthur's life. Within the duel, the two contestants seem to change themselves into bigger and badder creatures until one of them (Merlin) surrenders to strength and morphs himself into a germ. Although too small to be seen, Merlin succeeds in defeating his opponent due to the exponential havoc he causes in comparison to his size. And, of course, there are microscopic ingredients which we cannot see but can wreak havoc on our bodies when we consume them repeatedly (and often unknowingly).

Red Dye: Back in the 90's, red dye in food was pretty ubiquitous. Found in products such as Gatorade, chips and most of the processed foods I love, the dirty secret about the dye is its reliance on bugs to create it. Originating from the cochineal insect, red dye is produced when the shells of said insect are crushed and combined with water. And while this produces a cringe factor in regards to our food, Bob Alderink of the North Carolina Museum of Natural Sciences is quick (and correct) to point out that such bugs serve as a natural (and renewable) resource. In reality, the alternative to such creatures is synthetic and can possibly cause greater harm than a turned stomach.

While there's no significant evidence to cite Red Dye 40 as a contributing factor to ADHD in children some studies have cited a connection between the two. There aren't too many recent articles on the topic, however, one 2016 article by WebMd made reference to a study (done in 2007) which found that, "the consumption of foods containing dyes could increase hyperactive behavior in children." And whether it does or does not, the notion that it could follows the idea that small "ingredients" such as preservatives, parabens (found in many makeups) and pesticides (a.k.a. things we cannot see) can be bad for our systems if consumed or exposed to in high doses.

And while in yoga they tell us to communicate what one should do over what one shouldn't, I've included a few recipes (or one) which you may want to cook based on their natural (and tasty) ingredients.

Jerusalem Artichoke Salad with Spinach, Red Onions, Radishes and Walnuts: I effing love Mimi Thorisson. Lady seems to have it all including a killer blog entitled Manger (meaning "to eat" en francais). To get the delicious recipe, go to the link... scroll down, keep scrolling and scroll some more and you'll finally find the recipe above. Bon appetit!

Perspective: So enough with the doom and gloom above. While I do believe what we eat is connected to how we feel, it's certainly easy to make minor adjustments in our perspectives or actions in order to generate BIG happiness.

Small Acts of Kindness: Tis' the season, bitches. Small actions can have big consequences in our own happiness any time of year. It's not something I've researched, it's something I found for myself once I lay down any defensiveness which began to creep in with age. Simply saying hello to a coworker in the morning when you're tired AF, giving someone a hug or truly listening to someone in need can create the "dual happiness" for you and another, sending ripples throughout the community. It's not just something I say, Gisele says it too... so you know it's right. 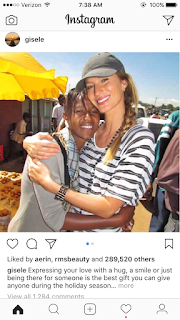 The caption is difficult to read but claims that,
"Expressing your love with a hug, a smile, or
just being there for someone is the best gift you
can give anyone during the holiday season..."