Awhile back, I purchased a book by Slim Aarons which showed the rich and beautiful at play. It was a little odd. To some extent I felt I was looking at dolls arranged in a setting as opposed to glances of real-life in play. But one photo that made me particularly curious was of a woman in Italy who owned a health spa. What made me particularly curious about this photo, I suppose, was that health seemed to be indicative of the Italian lifestyle and that beauty was something one attended the spa for. Indeed, spas, or mineral springs were originally places indicative of health. However, today, you can get your haircut at a spa, get your nails done at a spa and have a happy ending to your day at the spa. Just kidding. But, as spa services stretch to provide more services to wealthy clients (or those who can afford $60 haircuts) the spa had become less of a hot spring and more of a hot spot for needless pampering.

We all need a little pampering but not all of us need rose petals as it plays out. Indeed, many advertisements for massages include a woman relaxed in a glossy filter surrounded by rose petals. What this woman doesn't know (or doesn't care about) is that said massage is going to cost her a pretty penny. Indeed when I usually book us massages once a year on vacation, my finance never fails to get a bit antsy at the register after seeing the final tally of services rendered.

When I was in eleventh-grade, my history teacher told us that out Puritan roots run culturally deep, thanks to our European founders. In a way, he was right. When I worked part-time at Le Pain Quotidien, its ranks of international servers complained that there was no way they could get a decent massage in the city. One woman from Ethiopia claimed that in Addis Ababa, she could get a quick massage at the local spa, sit in the hot tub and get re-energized, all for the American equivalent of around 15 bucks. However, in America, there seems to be some guilt about feeling good. And when we do feel good, it's a big event. We schedule spa days replete with cucumber water and soft, trance-like music and we literally "pay for our sins." Unlike the quick and inexpensive massage experienced by my coworker, hour massages at a spa run around $120. A simple wax will set you back $35 and, as stated before, a haircut or trim can run up to $60... all before a tip is included. But massages and a few other services are not always the indulgent experiences we make them out to be. Indeed, as one of the million Americans who works out (another form of prostration not quite as extreme in other countries) I find it essential to have my muscles worked out every now and then. And, unfortunately, high prices can deter those who need the services most (read, the lady who cleans the mall bathrooms). So, as to assuage our collective guilt, I've tried to tease out some essential spa services which can help our bodies recover or deliver a unique sensory experience and those which are based more around beauty. As with all posts, you can disregard the information of you'd like... Enjoy! 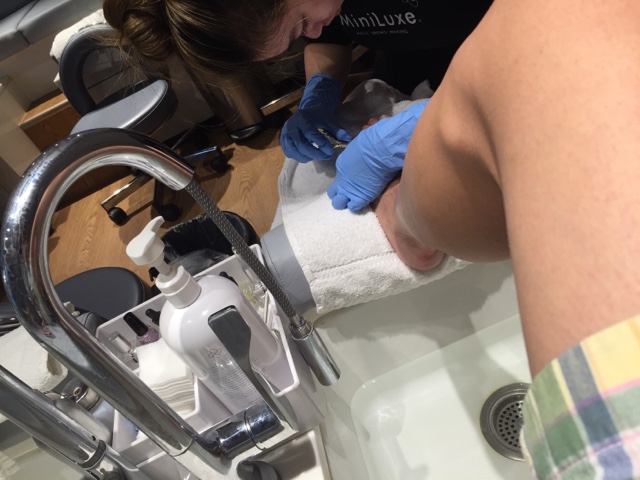 Manicures: When I was young, manicures seemed like the ultimate (accessible) indulgence. In the 90's, when I was around 13 and likely the youngest kid in my class to have their eyebrows (and face) waxed, one generally had to go to the spa over the mall kiosk to get such things accomplished. So sometimes my mother (who was generally generous about such things) would let me get a manicure to both literally and figuratively take the sting out of the situation above. And, in general, I was surprised by how inexpensive they were compared to the other services on the menu. Indeed, there has been some controversy as of late regarding the health of nail "accoutrements" such as gel nails, paraffin waxes and polish. But a good, old-fashioned manicure sans any of the above ingredients is a great way to have some over-worked ligaments worked out and can even help circulation in the area when we get them buffed (see In the Buff). So, every now and then, I treat myself to a "dry manicure", without polish. And, if you live in the DC area, my new favorite spot is Coatroom in Ballston.

Pedicures: When I grew a bit older, the same salon I went to for a wax became the salon I would go to for a massage. They say adolescents are self-centered pricks and as such, I had no problem spending my parents' money on something I didn't need. However, during one session, I noticed my feet really start to relax as they were getting worked out by the masseuse.

"Well," he explained, "everything starts with our feet. It's where we spend most of our time."

As I've grown older and indeed spend more and more time on my feet, I can tell when they're begging for a pedicure. I generally wait a few weeks after they start aching since I no longer have my parents' cash on hand but, every six weeks or so, I march my tired toes into the salon for a pedicure... again, with no polish.

Massage: While some massages can be indulgent (who fucking needs a seaweed-wrap?) I've found that some can be practical. As I've grown older, my beauty (or health) routines have moved from the plush settings of salons and into mall kiosks where things are generally more efficient and less expensive. And just as my international "compatriots" at Le Pain experienced more low key and practical services abroad, I've found a small kiosk where massages based on Chinese medicine run from 15 minutes to an hour and cost about a dollar a minute. C'est magnifique!

There are a lot of services based solely around beauty (or our conception of it). Beyond getting our muscles worked out, whether they be on our hands, feet or back (see above) there's a lot of work done on an aspect of our body that are already dead... our hair.

Haircuts: I've begun the "beauty" section with haircuts because, in general, haircuts are semi-essential. At some point, our tresses gets stressed and broken and fall out at a faster rate if we don't keep them a bit neat. But, beyond that, getting them colored with harsh chemicals, straightened (either chemically or by a straightener) or styled is something that falls squarely in the beauty category. Not that it's bad... just that it's costly and in the end, somewhat unnecessary to our routines. There is one exception I've found in blow drying, however. Several years ago, I struggled a bit with dandruff. At one point, my stylist asked, "do you wash your hair and then get into bed?" Indeed, having showered at night for as long as I can remember, I often washed my hair at the end of the day and hopped into bed. As such, having my scalp up against a head of wet hair for an entire evening led to oiliness, flakiness and a general grossness that could have been avoided with a little drying. And while I've lamented the high prices of spa services above, I have my eye on a T3 dryer for the holidays.

Waxing: When I was in college I wrote my senior thesis on the topic of female circumcision. Practiced mainly in East Africa, the tradition essentially helps women conform to a standard of beauty which, in the end, helps her secure a husband. During my presentation, a lot of faces showed discomfort and people squirmed in their seats (even though I didn't go into much detail). But, though not as extreme, waxing and shaving are small conformations to a standard of beauty that most people (myself included) might cringe at if not maintained. However, I've been thinking about it more and more.

Recently, I've been having some trouble with my skin and have, at times, seriously considered dropping a lot of cash to have my hair follicles zapped with a laser so as to stop any growth and thereby eliminate one irritant from the derrrrrmis. And, yet, on the opposite end of the scale, I've also realized that simply letting it grow would probably produce the same result as longer hair can often be softer (I think). To some extent, age is really inversely proportional to caring what others think and so the thought of not shaving, not waxing my eyebrows, etc. has become more appealing as I've grown older... although the idea has coincided with a search for several long skirts. However, at the end of the day, beauty involves remaining true to yourself. It's not something you'll find in the spa but in your life. So do as you'd like... and stay healthy. 😉