In high school, I began writing down quotes that were relevant to my life. There were quotes about competition, about love (as you're always "in" when you're young) and about the ambiguity of human life. But, after having collected such things for quite some time, one particular quote stands strong in my mind: "know thyself" by Socrates. Although simple, this particular quote seems to incorporate profound wisdom as well as the applicability to a host of situations. But sometimes, to "know thyself" better, one must first "trust thyself".

The idea of trust has been on my mind for awhile as I have delved deeper into the world of yoga. Within Bikram yoga, one and a half half hours of general silence in a 104 degree room leaves you to some serious soul searching... most often trying to locate the reason you signed up for class in the first place. But as you practice more and more, your body ebbs and flows against its limits of strength and flexibility... allowing you to move deeper into some poses and learn new things in the process. Most recently, I've been learning about balance. 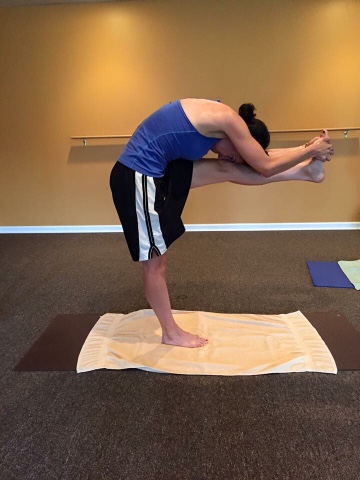 Balance was something I heard a lot about growing up. We were to find a balance between our playtime and school work (I rarely did) and often heard the axiom that, "life is a balance." And, as I grew older, I learned this was true. Indeed, today, we're exposed to messages about balance quite often, be they references to a "balanced diet", "work-life balance" or, in cooking, a "balance of flavors". But the balance attempted in yoga brings us back to the word's most tangible definition: the physical one.

Within the twenty-six poses of yoga, there are several poses or "asanas" that compose the "balancing series". In all three poses, one is expected to spend a relatively long amount of time on one leg and it has been through the above series that I have come to learn a bit more about my own balance and how it effects my body.

When I was in high-school,  I suffered from a few minor conditions mostly having to do with my running habit. There was a small bout of ITC Syndrome and a few other things that brought me to the athletic trainer's office where I was informed my feet had some high arches. As such, when I do yoga today, standing on one leg often leaves me leaning to one side or tensing my muscles, attempting of overcompensate for any inequities in the curvature of my feet. But, once I've gone deep enough into the pose, I feel an instant when it's okay to simply "let go" and relax into it, even if it means I'll slip a little or even if it means I'll fall. And when I do give in, like magic, my ligaments loosen and I'm able to move deeper into the pose than I ever thought possible. So, to use another quote from the Buddhist diaspora, "fall... and the net will catch you."

So what does all this have to do with eating? As stated above, in yoga, you learn a lot about your body: what it can do (on any given day) and what it can't. Indeed, yoga is said to inherently foster a mind-body connection. However, I've felt in my own life (at times), there's often a disconnect between the mind and body when it comes to eating. Food, in its greatest sense, (to use a quote from another Greek) "is medicine." It supplies us with energy and can be used to even heal ailments. And, to some extent, I believe, our bodies recognize that. And, if listened to, I believe our bodies will naturally point us in a direction that is healthy and thereby, helpful: to both ourselves and the environment... bringing us back to our center of balance... and such.