I recently received the latest Williams Sonoma catalog, happy to look at objects which are beautiful but fiscally out of reach. To be sure, this particular catalog showcases copper goods... putting a spotlight on the holy grail of cooking materials. There are graceful copper pots by Mauviel and even a copper-laced edition of the Vitamix blender (which I'm almost tempted to trade in my current model for). But, copper is really for the elite... chefs or otherwise. That being said... the day following the arrival of my aforementioned catalog, I came across a French press with low-grade copper accents in celebration of the Golden Anniversary for Peet's Coffee... and couldn't resist.


I've been meaning to get a French press for awhile. As stated in The Daily Grind, I've always been a bit befuddled by coffee but heard you could throw lose-leaf tea into the above device. While I enjoy my little tea ball, I figured having an alternate method of making large quantities of tea (read: more than just a cup) would be beneficial. Plus, I remember seeing an entire shelf devoted to a neat line of French presses in Martha Stewart's kitchen and always was a little envious. So, while the copper on my French press did indeed turn out to be of terrible quality, I figured it'd still behoove to make teas worthy of my trendy little kitchen device. Plus, with spring upon us (once she breaks from her aggravating indecision), I figured it'd also be time to sweep in some refreshing blends with the new breeze and shelve the heavier teas of winter. So, without further ado: a list of fresh teas to go with my "fresh" purchase... Enjoy! 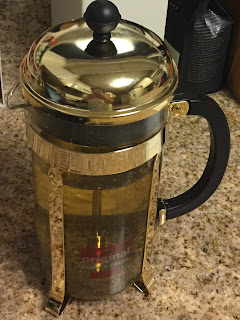 Happy Anniversary, Peet's Coffee. In celebration, I will overpay for sub-par goods.

Lemongrass-Ginger Tea: I was originally going to feature a recipe for lemon-lemongrass tea here. With lemon being a citrus fruit and lemongrass being, an herb with a citrus flavor (according to Wikipedia), I figured the combination would produce a fine beverage. But as I searched the Internet for this combination, I came across lemongrass-ginger tea, a combination which seemed both intriguing and healthy.

As I delve deeper into the world of Thai cooking, I consistently see references to lemongrass and ginger in said category of recipes. Chili paste, peanut sauce and curries tend to incorporate one of these two ingredients. And, indeed, the nutritionist responsible for the recipe above seems to carry Malaysian heritage, whose cooking style is closely aligned with the Southeast Asian diaspora. In terms of health benefits (according to her site), lemongrass (whose nutrients are most densely packed in its white bulbs) carries vitamins A and C as well as magnesium, iron and calcium. It also acts as an anti-septic, detoxifying the gut of unneeded bacteria and purifying the blood (and skin) in the process. Ginger, as one most likely knows, is a heavy-hitter in the anti-inflammatory and anti-oxidant departments. It aids in digestion and with upset stomachs and is a great way to wake up in the morning with its spicy flavor. Furthermore, both lemongrass and ginger lend themselves well to the French press method of steeping. While each ingredient along is often to big for a tea ball and yet would still be an annoyance to have floating in your cup, a French press offers containment of your small slices while allowing their flavor and nutritional benefits to permeate the water.

Citrus slices: Piggybacking on the notion of citrus-flavored teas like the one above, infusing citrus slices in water is a surefire way to gain flavor, health benefits and the taste of spring in a few easy steps. While we're yet to fall into the lazy, hazy days of summer, the arrival of fresh fruit signals the beginning of warmer days. And what better way to use all of your fruit than to throw some peels in with your tea once you've consumed the flesh within. To do so, (according to the linked site above) simply place your peels (after washing them thoroughly - I suggest the Chef'n Veggie Brush for this task) in hot water, let steep for an hour and strain. Not only will the resulting liquid taste good (if not a little bitter) but it should add a boost of vitamin C to your morning routine as well.

Yoga Tea: A Capital Teas just opened up in my neighborhood and this is my new obsession.