If planning for our day is playing, "the game before the game," (as referenced in A Balanced Buddy and Moral Arguments) then our daily coffee may represent our consumption of grinds before the grind. Indeed, coffee wakes us up (or shakes one up in my case) but it can also serve as a delivery system for other nutrients before we start our day.

Growing up, I was relatively unfamiliar with coffee, only seeing the pot come out when we had guests. My mother was a big tea drinker and, to an extent, I "got" tea. Simply put some leaves, herbs and/or spices in a tea bag and steep. But the irony of the situation is that while I have understood the "creation" of tea for quite some time, I still struggle to develop combinations on my own which are intriguing and interesting on the palate and which offer a hearty dose of caffeine. Here, consequently, is where coffee comes in.

As I've eschewed electric coffee makers for quite some time, seeing them as incomprehensible, medieval contraptions, I recently bought a spice grinder (which can also grind coffee beans) and a Chemex coffee maker both of which allow me to view the production of coffee from start to finish (which sounds very hipster and overly concerned with food however is simply, for me, a vehicle for understanding). As such, I've begun to make coffee several mornings each week, sparing me the physical and economic "grind" of Starbucks. And, like tea, I've been experimenting with different spice combinations to, well, spice my coffee up (isn't there that article that claimed if you took your coffee black, you were more likely to be a psychopath? I'm just a lowly neurotic thankyouverymuch). 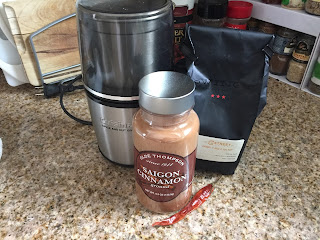 Cinnamon and a chili: a sweet symphony for coffee.

The idea of Mexican Hot Chocolate has always intrigued me. Made of cacao beans, with added spice, it intuitively seems better for you because it's not part of the Western diaspora (indeed it was Europeans who first introduced sugar to the cacao concoction). And unlike sugar, it's true that a hint of spice can be good for us. According to Jace Mortensen (via the Dr. Weil site), chilies, a crop indigenous to Mesoamerica, are able to, promote cardiovascular health and, "[metabolize] fat." So adding the spice to our daily drink, be it hot chocolate or coffee is a great way to get a boost on your metabolic rate before the day begins. Furthermore, the addition of cinnamon, another spice present in the above drink can redouble the body's exposure to a substance which is heart healthy and can possibly, "reduce inflammation," according to WebMD. So I've been making "Mexican coffee" because it's healthy and it's easy.


It's British, stay with it.

I love my spice grinder. I bought it at Williams Sonoma on a whim and never looked back (I'm obviously great with commitments). It's a great way to blend my coffee and spices before putting them into the Chemex. It adds a great flavor and routine to my morning as I watch the water boil (yes, this is hypnotic in the morning), take in the aroma of coffee brewing and let the concoction hit my stomach before rushing me out the door à la Mr. Bean in his Mr. Bean cartoon. Plus, the addition of said spices seems to keep my body warm as I head outdoors during this last grisly month-or-so of winter. But (obviously) don't trust me. Try this delicious goodness for yourself. The recipe lies below.
Enjoy!

*Note: I've parceled out the amounts for my Mexican coffee for use with either a Chemex or Keurig coffee maker. As I said before, I'm bad with conventional coffee machines but if you have one, I'm sure you'll be able to fuss with the mix.

Email ThisBlogThis!Share to TwitterShare to FacebookShare to Pinterest
Labels: Coffee