I have to be candid about something: I put myself on a bit of a diet (in name only) not for the sake of weight awareness but for the sake of experimentation. The idea for said "diet" came about as I read an article on Into the Gloss looking at how the location of acne on our faces indicates larger problems within the body. According to the article, acne within the T-Zone can come about as the result of stress or poor circulation while the acne which I struggle with on the chin, jaw and neck can often result from starchy foods, processed sugar and/or a curious little factor called Candida. Unsure of the latter element, I googled "Candida" to find it defined as a fungus (more specifically, a yeast). My search also brought me to something called The Candida Diet whose website talked about the fact that as we consume diets high in sugar and are exposed to prolonged periods of stress (my life in a nutshell) the above fungus can often flourish in our intestines and wreak havoc on our mental clarity, immune systems and levels of pain. But like any diet promises, there is a solution: mainly in the form of re-formed eating habits. So I was intrigued and decided to do a bit of experimentation. 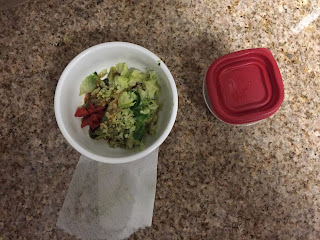 As a diet high in sugar tends to produce an environment where the Candida fungus can thrive, cutting out most sugars (including fruits) seems to be step one of the Candida Diet. Introducing probiotics and natural antifungals to the diet seems to be step two and three respectively. And like any well-structured diet, the Candida program supplies its followers with information to assist their efforts before, during and after their endeavors. Similar to the cleanse or "recasting" put forth in French Women Don't Get Fat, the Candida Diet suggests one set aside some quiet, relaxing time to engage in the cleanse. Since (added) sugar is so prevalent in our dietary landspace (think anything from bread to table salt, seriously) the Candida Diet also  specifies foods you can eat and those you should avoid on the program. But unlike the recasting in FWDGF which supports a cleanse centered around the tasty but liquid leek soup, the Candida Diet allows one to consume solid foods from start to finish. So I began thinking: what if I tried eating nothing but whole, unprocessed foods. The idea is not revolutionary, indeed, the Whole30 Program seems to suggest it and our ancestors have engaged in the practice for many years prior but it did make me begin thinking about food in a different way.

As I thought about eating natural foods exclusively (in this case: foods that have not been changed from their original form), it struck me as daunting to leave behind so many ingredients that find their way into my everyday diet. No more soy sauce? Vinegar? Bullion cubes????? The idea of preparing food would have to be overhauled and rethought. So I did some thinking. While I was a bit more exacting in the factors of my experiment for Sticky Situations I became much more general in planning my individual version of the Candida Diet. In general, I allowed myself to consume:

With the exception of the last component, everything on my list seemed relatively unchanged from its original form and I tried not too be to picky as to whether something was fresh or canned (you have to stop somewhere and, for me, it's usually at my pocketbook). But oil seems a little indispensable... and I'll tell you why.

Looking at my prepared list of adequate foods. I began thinking of ways to enhance their flavors. Gone, for awhile, would be my days of rich dips and dressings to accompany my veggies. So I called on my very limited knowledge of cooking and culture to help me out and after a bit of consideration, I identified two components which add flavor to any dish:

Heat and spices can bring out or add flavor to many dishes, respectively. Both are methods which have been employed for ages in the culinary tradition (indeed, before there was the Whole30, there was the whole spice trade). And I thought that if perhaps I could use either or both methods in my cooking, my Candida experiment wouldn't seem so bad. But both heat and spices generally take oil for various reasons and so I kept it in my bag of tricks and went about my business and after a few days... several things became apparent.

While I began my Candida cleanse as a way to clear up some lingering acne (and see just how hard it can be to eat naturally, exclusively) I didn't spend too much time checking my appearance; not in terms of my acne and certainly not in terms of my weight. Instead, several other revelations came into clear view:

1. You will be tired and hungry: While the above statement sounds horrible, it was actually an interesting phenomenon to see my body, first get tired from a dip in calories... and then hungry as it reset itself after more natural eating. And just as the Candida Diet claims one benefit to be a lack of lethargy, I could tell that my tired state was pretty straightforward and natural, not a sluggish frustration which I've been known to experience. Instead, I found joy in daytime naps and perhaps a slower pace than I experienced while I was consuming sugar. Likewise, I could tell that my body was actually hungry, not longing for the taste of food but for the natural nutrients they carried. To this extent, eating more natural, healthy food led to eating more natural, healthy foods for their nutritional value over their taste.

2. Apparently I've been in a bad mood for the past ten years: As I stated before, when I went on my own version of the Candida Diet, my concern with acne quickly evaporated and new changes which my body was unfamiliar with came into clear view. The most significant change I noticed while on the diet was in my mood. I never really thought about food correlating with mood (indeed, they only sound alike) but it makes sense since food is, essentially, energy and with low energy, we're not at our best. And since I've reintroduced some foods back into my diet, those days that I eat mostly junk are days I can tell my body is fighting to stay awake with little energy left over for social pleasantries. But with a body running more efficiently, I noticed a stabilization in mood and even less anxiety as my energy, hormones, whatever (I'm just guessing here) seemed to be more consistent, rather than shooting towards the moon and then crashing down to Earth.

3. Meat is a must (for me): With three-fifths of my family maintaining a vegetarian status, it's easy for me to forget to eat meat and begrudge the argument that "we became the intelligent species we are today due to our meat consumption." But I know my body needs meat, a fact which became ever more apparent as I ate more natural foods. Referring to point number one, I often came home at the end of the day consistently hungry and knew some shredded brussel sprouts with salt and oil was just not gonna cut it. Enter meat (and nuts). Without the fat (and perhaps unnecessary calories) gained from rich dips and dressings my body really called out for a fat and protein source. And while it may not be part of the cleanse series of the Candida Diet, I gave my body what it wanted. And it felt good.

4. Fruit a'int so bad: When I was in third  grade, we had to draw a picture and write some facts about ourselves so our parents might be able to identify where we sat during back to school night. I remember being unaware as to factors that would reveal my identity but I knew I hated fruit and I wanted my mom to know it too. And, low-and-behold, my mom returned and claimed she knew exactly where I sat after reading that line. And my dislike held true for many years despite my mother's repeated attempts to have us eat healthy snacks. But as I began to forgo all the snacks I ate as a kid (as they say in the Bible, "when I was no longer a child, I put away childish things..."), I realized that: fruit a'int that bad. As I waved goodbye to sugar in my tea, in my snacks and in my general eating habits, fruit appeared as a welcome substitute (particularly when infused in hot water).

5. You will not want to return to your former way of eating: While I had a few tough times on the "diet" I was surprised by how quickly my body adjusted to this new form of eating. It was fun thinking of new foods to eat and new modes of preparation to develop flavors. And while my mind was distracted in thinking of new recipes to try, my body seemed to lock into a new mode of natural eating. I think it hit me like a ton of bricks when I walked into a Starbucks and didn't feel like ordering a venti caramel macchiato with extra caramel and whip, even with a very long day ahead of me. In general, I'm sure anyone would be surprised at how easy it is (physically) to maintain a more natural form of eating. The difficulty seems to lie (at first) in gaining easy access to such foods and/or preparing them. This is where the salad bar at the grocery store becomes your friend. As someone who generally cooks for one, I was formerly intimidated at the prospect of buying fresh foods, preparing them and eating them before they went bad. But I noticed that as my body (naturally) craved more natural foods, an entire head of lettuce, tomatoes and six chicken thighs were nothing for the week as I was more inclined to travel home for a healthy meal over stopping out to get something more "exciting" (or salty). This being said, as my grocery bill went up, my entire food budget began to go down as I bought more natural ingredients and stayed in for meals... a consequence that I quickly and willingly got used to.

So eating more naturally has become a bit of a joy and a learning curve. But learning new things can (literally) become the spice of life. And a few recipes I have learned to love are as follows. Enjoy!

Chili Paste: I love spicy foods and this recipe provides a great way to add flavor to any dish.

Nut butters: As with hummus, the combination of (in my case) cashews, oil and salt makes for a divine creation which can provide you with a hit of protein when needed.