Last Spring, chef April Bloomfield was all over the Williams Sonoma website. The site featured her recipe for something of a pea mash and told her backstory of a British upbringing (it was here that I learned of London's River Café and immediately subscribed to their YouTube channel). And I was surprised that for a chef renown for her work with meat (her first cookbook is entitled A Girl and Her Pig) Bloomfield seems just at home in the world of veggies. Indeed, her most recent cookbook is entitled A Girl And Her Greens. But like many successful people, this particular chef does not reinvent the wheel when switching between the taxonomic kingdoms of animalia and plantae. Indeed, I've read in The New York Times that Bloomfield essentially, "treats a vegetable as if it were meat," her first love. This notion got me thinking that while I love my veggies, I often miss out on the savory sauces and methodical methods employed in the creation of a meat dish. So along with a review of Bloomfield's recipe for "Whole Pot Roasted Cauliflower With Tomatoes and Anchovies", I've also listed some of my favorite veggies and the cuts of meat with which they compare (in my opinion). I've also addresses ways in which such veggies may be prepared when treated like meat. Enjoy! 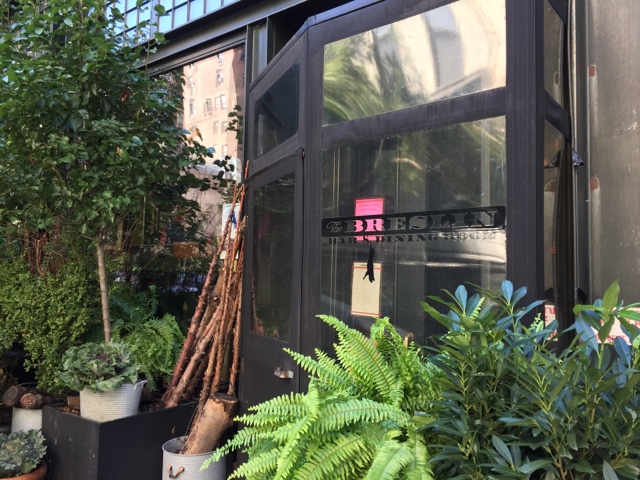 The Breslin: one of Bloomfield's several restaurants in the United States.

Whole Pot Roasted Cauliflower with Tomatoes and Anchovies: As stated before, Bloomfield essentially, "treats a vegetable as if it were meat." In the above recipe, Bloomfield calls for the cook to brown both sides of a cauliflower head in a pan, much like one might brown a breast of chicken before roasting it in the oven. An just as one creates a sauce which incorporates meat drippings for added flavor, the recipe's next step calls for the cook to add garlic, diced tomatoes, white wine and chilies (among other things) to the pot to form a savory sauce that will later be used to braise the cauliflower as it roasts in the oven. All in all, this recipe reminds me of another one of my favorites from the New York Times: Daniel Boulud's Chicken Tagine. Like Boulud, Bloomfield uses a similar process of cooking of but no meat. C'est bien!

Vegetable Dijonnaise: For me, broth is a cornerstone of my cooking. I love basting things in it, reducing it for sauce and using it to make soups. And while cubes of chicken bullion are generally a (dietary) luxury I afford myself, I often try to make broth on my own. Partly, I love the challenge of making anything taste as good as bullion and partly, I like trying to sneak herbs into my dishes in ways other than an ancillary garnish. So I was intrigued when I read a menu at Bar Bouchée in Connecticut which featured mussels in a Dijon mustard broth. Could this be a broth that contained more flavor than parsley and onions boiled in water? Unfortunately, when I searched for the broth's recipe online, I only met with recipes for mussels containing some variation of a mustard sauce or broth. However, some vegetables, such as peppers, leeks or even cabbage can be treated more as seafood than meat, proper. With a similar delicacy that strays from high temperatures and/or harsh cooking methods, I though vegetables would work as a great substitution for mussels in Food52's Mussles Dijonnaise.

The recipe (link here) starts simply enough by sauteing onions, garlic and shallots in butter (although, I substituted the butter for oil) and proceeds to have chefs add, "mussels, salt, pepper, bay leaf, thyme, white wine and cream," to the pot (the last of which I omitted). Following the recipe's simplicity, the chef is to let the ingredients simmer for several minutes, remove the mussels and let the sauce boil down further. Here, however, instead of using the recipe's requisite three quarts of mussels, I substituted three bell peppers (of any color) and two leeks but I'd imagine any combination of vegetables would be just as lovely... and tasty.

Bean Cassoulet: When you learn about cooking from scratch (no pun intended) it's hard to escape learning about the French style. And while this style originated from Italian influences (see The New Yorker's Secret Ingredients) it is simply the standard bearer of (Western) cuisine. I don't cook much in the French style but I do like to look at certain recipes. It's hard not to be intrigued by a ragout over a stew, even though they're essentially the same thing. So when I came across a recipe for a cassoulet, I was intrigued indeed.

As Winter is fast approaching, I've been intrigued not only by the idea of a cassoulet but with the concept of eating cleaner meats, ones that have been raised humanely and without much antibiotics or added hormones (see Days Between Days for John Oliver's update on what you might be eating). I remember reading in Bill Buford's Heat (where he details his tenure in a high-class kitchen) about preparing a pork shoulder by allowing the heat to slowly tenderize it over the course of many hours. Such an image seems symbiotic with the cold days of Winter. So when I saw that pork shoulder was included in a cassoulet, I knew it was a recipe I wanted to try. The thing is, a cassoulet calls for a lot of meat; not just pork shoulder but bacon and chorizo as well (depending on the recipe). Essentially, a cassoulet requires a lot of meat for someone who doesn't eat much of it and doesn't make much money. But the recipe also calls for beans: Great Northern or small white beans. And with the dish's method of slowly simmering ingredients in a wine and tomato broth with onions and herbs, I figured that adjusting ingredients and using beans alone would make for a satisfying, hearty dish. Thomas Keller provides a great cassoulet recipe through the Williams-Sonoma website (found here). Simply adjust ingredients as you see fit to make your own version of a cassoulet.

So there you have it: a post that took me way too long to write. Hope you enjoy the recipes and that they are just as satisfying as any meat dish. And for shits and giggles, here is the New York Times recipe for roasted cauliflower in which you are instructed to, "eat.. like a good steak." Enjoy!