It's true. I really can't stand Kate Hudson. If I'm to truly confess to this fact... it's because she used to have big cheeks. I know, it's the weirdest bias ever but I think that, deep down, I despised my big cheeks for so long that I began to project this dislike onto celebrities who possessed them (think Charlize Theron in the 90's). But, in a very real sense I do hold a grudge against the children of celebrities who become celebrities themselves. It's not a jealousy thing... it's just a lack of originality which make my blood boil. And Kate Hudson has served as the quintessential celebrity's child who came to fame through her parents' access... apparently to roles in subpar movies. But Hudson no longer inhabits the silver screen alone. She has now branched out to the fashion industry with her new line of "fabletic" clothing which apparently offers the same amount of quality as her movies.

Of course, like many celebrity lines, Hudson serves as the face of the company rather than it's founder. And while Fabletic's parent company, JustFab, has come under fire for its uncertain subscription practices (apparently its membership is harder to cancel than Comcast's) I take more issue with the company's advertisements which feature Hudson in non-existent yoga poses which demonstrate she is about as good a yogi as she is actress. And, perhaps, at the end of the day, this is what irks me about actors in an otherwise competitive industry who have literally had the red carpet rolled out for them through their parents' connections... everything's easy. And yoga or "union" with ourselves is anything but. So, while I'm sure Hudson has had her struggles, I feel justified in throwing a little shade her way... especially when she's exemplifying bad yoga form. Enjoy!

According to the publication Yoga Journal, "[upward dog] is one of the most common yoga poses which makes getting it right extra important." In a significant sense, upward dog aims to strengthen one's spine while stretching the chest and lungs (among other things). And while your average yogi might not be hamming for the camera, if applying adequate effort, they'll likely look like this... 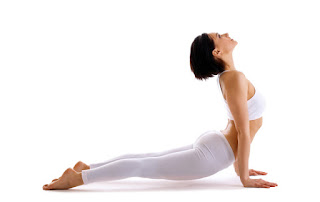 Not giving the camera a smoldering eye, à la... 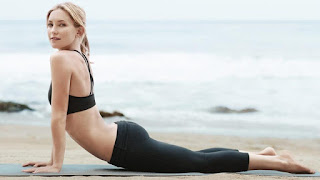 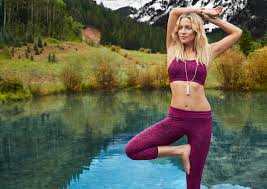 This pose would only be used if you're selling sub-par clothing.


And while Hudson does seem to have some good moves when displaying other poses, there is an array of "Insta-yogis" and bloggers who attempt to achieve depth over form for the sake of their audience. It doesn't bother me so much that such people might seek to impress through their slightly askew poses, it's that the benefits of yoga don't really come through lest one maintain proper form. It might be a pain in the ass but you're in yoga to get your ass in gear, most likely. As such, I feel little remorse pose-shaming some people out there to impress through yoga rather than to instruct.

When I took gymnastics as a youngster, our coach would always instruct us to keep our, "headlights forward" which, looking back was an odd thing to say but what he meant was to keep our hips aligned in the direction we were facing. When coming out of a cartwheel, our hips were not to face to the side but forward as our faces. And, as far as I can tell, the same rule applies in yoga.

It's likely no surprise that bloggers talk about themselves a lot (yeah, ha ha) but the Balanced Blonde talks ad nauseam about her workouts. I've heard it said that people who talk constantly about their diets are more self-centered than others and perhaps talk of workouts is not far behind. Either way, workouts involving yoga on the beach are pretty difficult what with the sand and the balance and the who knows what else. As such the Balance Blonde's photos involving yoga leave a little to be desired, like...

A Bikram Yoga class is split into two series... the standing series and the floor series. And while triangle pose represents the height or most difficult part of the standing series, camel pose represents the height of the floor. It is a difficult pose and one that I usually skip but, as stated above, one should keep their hips parallel with the wall... making sure they are not leaning back but bending their spine to rotate backwards, allowing them to look something like this... 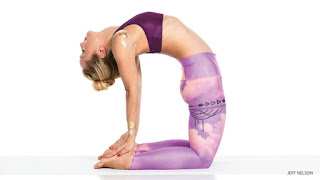 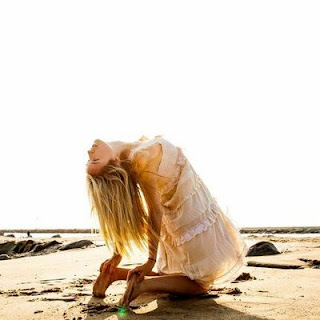 Bow pose is kind of a fun one because, when you cheat... you look pretty badass and the more you practice, the more badass you become whether you're doing the pose correctly or not. I tend to cheat on the pose in class and a lot of people cheat on the pose online. So it's of little surprise that we mostly this... 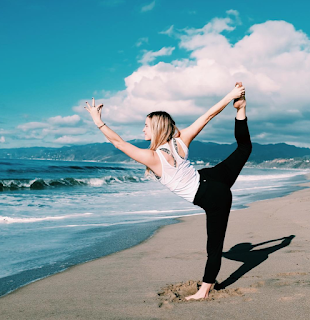 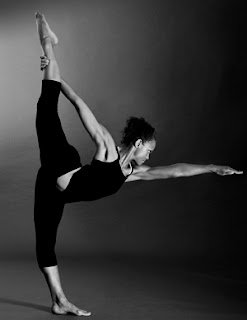 So, what have we learned from all this? I, for one, have learned that I'm a pretty big asshole who enjoys nitpicking the poses of unassuming blondes. But, while alignment in postures can be subtle (even seemingly unnoticeable) these small adjustments can create benefits larger than the sum of their (body) parts.

We tend to rely on several parts of our body to get us through the day. I, for one, would cramp my feet a lot, relying more on my foot muscles than others to effectively move myself around. But imagine (if you're a teacher) only calling on the student you know has the answer. Whether or not the other kids would rather be left alone, they're not being worked as well as they could be. We can put our bodies through a similar scenario, relying on only a few muscles we know can get us through our postures or runs or whatever. And while relying on our other muscles through proper form can be painful, you eventually arrive at a place where you can delve deeper into your workout than you ever could by cheating.

And if you'd like to check in with your form as I often do when I see myself cutting some corners, a few ways are showcased below: starting with an easy exercise and moving onto one more difficult.

Balancing Stick is one of those poses that's a welcome respite from the more demanding ones surrounding it. That said, it's important to take note of your form in a posture which can sometimes foster laziness through its simplicity. Annnndddd, checking your form in this posture is super easy. To preform the asana, stand with your feet together and your arms by your side. Lift your arms over your head, interlacing your fingers and releasing your pointer fingers a la... 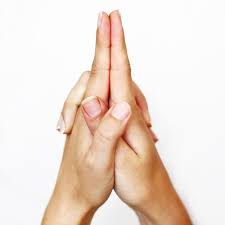 1. Step your right foot forward and lift your left foot behind you.

2. Keep tilting your hands down and leg up until your body forms a "T'.

3. As you remain in this "T" form, make sure that your left hip faces the ground. As we lift the leg, there is a tendency for the hip and foot to turn out to the left. As long as the top of your foot and hip face downward, you're literally in good shape.

Camel is a pretty important pose in yoga... so much so that I don't want to explain its movements myself. But there is a drill which can place us in a "mild" form of the position while ensuring our alignment is straight.

1. Place a yoga mat against a wall and stand on your knees so that your thighs, torso and shoulders touch it.

2. Place your hands with your fingertips downwards against your lower back.

3. Push your calves into the floor. Stretch your spine up before bending it back... KEEPING YOUR BELLY BUTTON ON THE WALL THE ENTIRE TIME.

4. Reach back for your heels. Hold for a few seconds and come up. Congratulations, you made it!

Again, do each drill at your own will and make sure not to push yourself too hard. THIS IS A DRILL, PEOPLE. And if you don't want to check in with alignment, you can simply watch the video below in which the featured yogi does everything correctly. See, I'm ending on a positive note!


The girl in this video has some serious moves. (The girl).