The are a few pieces of clothing I really love... and never wear. In a closet already pared down from its unneeded and unworn pieces from high school, a few key pieces remain. And of those few key pieces, there are a several that make a debut once a year... so they don't get wrinkled, don't get dirty and don't get breathed on wrong.

The irony of being a minimalist is that the few pieces I choose to purchase are often sold at prices high above my budget. I justify the purchase by the fact(s) that a) I really want it b) its presence in my closet makes me happy (within reason) and c) it's usually my second of three clothing purchases in a year. But while I can suck it up and drop some cash on a piece I really like, the constant dry cleaning it often requires drives me up the wall. Ergo, such pieces usually sit at the back of my closet until they're pulled out for a wedding, the holidays or, in this case, a vacation.

On a recent trip to Ireland, I began the packing process early, ensuring we had everything we needed in order to prepare for what wasn't sold abroad. Within the packing process, I began to think of clothes and figured that, since even my camera-shy fiancé, would be taking a lot of pictures, it'd probably be one of those scenarios where looking a bit better might be in my best interest. Also, clothes have been my only defense recently against what seems to be a decaying body. So, with that in mind, I set out to pack...

Plane Ride: Giants Sweatshirt (obvi.)
While it's not one of my favorite articles of clothing or even my article of clothing to begin with, who gives a shit what you look like in the Hartford airport or on a plane. And while nice sites suggest you to bring a warm pashmina or some slippers for a long ride... they can go eff themselves. A sweatshirt and a stiff drink are the two things essential for an international flight. So, nailed that one. 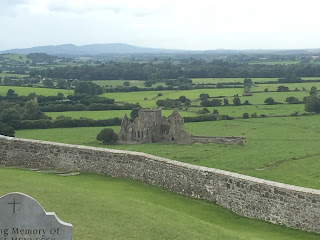 Dublin: Things get weird.
So, while I have some nice tops that I love, the bottom half of my wardrobe is pretty scrubby... and I like it that way. So, while I forced myself to wear some silk tops which rarely make an appearance in the off (wedding) season, I found myself wearing breezy Adam Lippes tanks with mesh shorts snagged from my school's lost and found. So, nailed that one too.

Galway: Things get cold.
On the middle of our trip is where I found the "middle road" of my dressing routine. While the temperature rarely reaches above seventy-five on the Emerald Isle and my body rarely feels comfortable below that number, I often paired a wool or thick dress with a cotton hoodie. When you're far away from home, it's comforting to wear what you would everyfrigginday when you're back there. 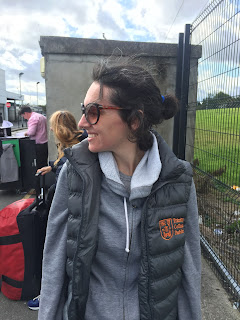 If you look closely, you'll see the gray hair matches the gray jackets.

Kilkenny: Things get normal.
Just as any resolution for change, my motivation began to diminish towards the end of the trip. This meant hoodies more often, mesh shorts more often... yoga clothes more often. Luckily for me, Kilkenny was a lovely but decidedly less cosmopolitan destination than our previous two. In this sense, urban sophistication and (Irish) trendiness gave way to a more rural air of ease... in both culture and in clothing.

So what did I learn? 1.That my nice clothes won't melt when I take them out of the closet. 2. That I should probably stick with my routine of wearing simple dresses and hoodies for days since that is my default here and across the pond and 3. The Irish are too nice to care what you wear. Slainte!
Posted by Eating Natty at 6:14 AM