I was struck by the idea for a post involving the effects of sunlight after reading an article which featured a woman who lay in the sunshine to reset her body with the star's "positive vibes". But after scouring the Internet and unable to retrieve said article, I was left with little correlation between the sun and "good vibes" but was able to locate a lot of information about how the sun is good for our health.

Long before the iPad, people worshiped the sun. There was Quezecotal in present-day Mexico, Ra in Egypt and so on and so forth. Ubiquitous was the sun god because, irregardless of location or empire, humans (and the things they eat) need the sun's rays to survive. But just like the oscillations produced through light waves, there has been some back-and-forth as to whether sunlight (and sunscreen) is beneficial.

In my endeavor to find a link between the sun's rays and positive vibrations, I came across the fact that the sun emits electromagnetic radiation which helps to make up the spectrum of colors we see and also the ultraviolet rays which we cannot. And it is these particular (uv) rays which can do us some good in the health department. 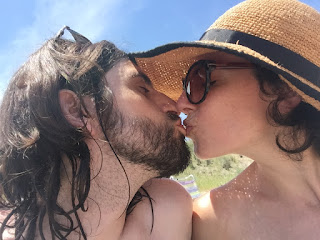 Nothing wrong with being a little sun-kissed ;)

Recently, uv rays have gotten a bad rap, what with global warming and cancer; two extraordinarily serious conditions but ones that have seemed to make us throw the baby out with the bath water. According to the website Mind Body Green, ultra violet rays help our bodies build viatmin D which it then turns around and applies to building our bone strength, boosting immunity, protecting us from cancers and loosing weight (among other benefits). And while Havard Health Publications note that both UVB and UVA rays can do our bodies harm in the forms of sunburn and or cancers, respectively, it also notes the importance of such wavelengths in the creation of viatmin D. And just as there are positives and negatives of sunshine, 2016 has shown us that the same holds true for the use of sunscreen.

Within the past year, a slew of articles hit the feeds of Facebook noting harmful chemicals present in many sunscreens on the shelves. While I'm one for common sense (use sunscreen) I do believe that many things mass produced do contain elements which can be harmful (that being said, I found the article Excuse Me While I Lather My Child In This Toxic Death Cream hilarious). Turns out though, the aforementioned Mind Body Green article as well as an one put of by Dr. Oz which ironically attempted to "burn" common sunscreens both note a small window of time in which it is beneficial to go without the substance.

In general (and according to the articles above), it is loosely recommend that we, as humans, receive between 10 to 20 minutes of "unblocked" sunlight each day in order to allow our bodies to develop the vitamin D it needs for optimal functioning. And while the dog-days of summer can be a bit unstructured (particularly if you're a teacher or have kids) scheduling some time in the sun can be a helpful way to routinize your routine. Below are a few ways I like to sneak some sun in the summer. Enjoy! 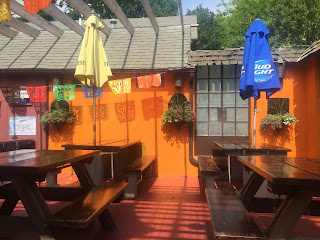 Dine "en plein air": In art class growing up, we learned about artists painting "en plein air" which was a fancy way of saying they painted outdoors. As I suppose I was more of a realist back then, I particularly enjoyed the Dutch still-life paintings or (full disclosure) the Carravagios which seemed to be painted in some dark, damp room where some dark things were going on. But as I've grown older (and seem to have lost more touch with reality) I've grown to love dining "en plein air". If there's a restaurant with patio seating, you can rest assured I'll take it. And while many tables conveniently hold umbrellas for some safety from the hot, hot heat, you can squeeze some time in the sun... preferably with a cocktail.

Go for a walk: You have Pokemon Go so there's no excuse.

And if you want to get weird...

Eat "high vibrational foods": This seems to be the one link I was able to identify between the sun's rays and good vibrations. When I stated earlier in present tense: "humans [and the things they eat] need the sun's rays to survive," it was a bit of a misnomer. Today, many things we eat don't directly rely on the sun for survival (think Chex Mix). But just as processed food can be created in a factory indirectly powered by the sun, our bodies can gain benefits from foods grown with the help of our favorite star.

So far, with waves and frequencies, we can see colors of the electromagnetic spectrum and hear sound waves carried through a medium but is it possible to use our sense of taste to identify energy? While the sun acts as a life force for plants and animals, it can be surmised that the same force is carried on through the plants and animals we eat. In South Korea, they believe that the closer to death you consume and animal, the more of its energy you take in and with "high-vibrational" foods, fruits and veggies plucked straight from the plant and eaten are said to hold more nutrients. And let's be honest, fresh fuits and veggies and meats taste worlds away from their frozen counterparts. So, to help in your endeavor to eat high-vibrational foods, I've included a link for "high vibrational nice cream" here).

And if you want to get really weird...

Within the Aurvedic tradition, a color is associated with each chakra or "energy center" of the body. Just as there are seven colors of the rainbow, there are seven chakras throughout our body beginning with the root chakra which holds a deep red color and traveling through the crown chakra which appropriately holds the color historically associated with royalty: purple. According to gaia.com, when we eat foods the color of a particular chakra we're struggling with they can help to alleviate our symptoms. Even Eating Well claims that blue blueberries can be used to, "keep your mind sharp" and the lycopene in red tomatoes can help defend against prostrate cancer. To help, a chart on chakras and their associated colors lies below. 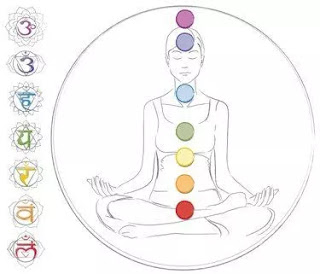 Eating for your chakras will only get you so far, however. It seems as though the closer our food is to the sun, the better it is for us. So, in conclusion, stay close, my friends, whether it be recieving the sun's rays with #nofliter or consuming its byproduct through plants, it can only serve to do us some good.
Posted by Unknown at 5:37 PM