The idea of a progressive dinner has always confounded me. In an event that warrants travel from one location to the next, I'm pretty sure I'd end up at a Starbucks by myself. In general, progressive dinners seem to be for those with time and a sense of sociability, neither of which I have much of these days. But no matter. Time by myself warrants time for recipe creation... in sweatpants.

In Asian Pickles: Japan, Karen Solomon talks about "progressive pickling" or simply adding vegetables to a pickle bed. The Cadillac of picking beds, as Solomon explains, is a fermented mixture of elements such as chili, rice bran and garlic which are consistently stirred and aerated in order to create a medium to dunk vegetables in so that they... well, pickle. This pickling bed or, nuka, as they refer to it in Japan, reminded me a lot of composting in that you're consistently adding materials to it so that it (ironically) breaks down. But even though the fermenting process of picking often produces lactic acid which will kill harmful microbes in our pickle bed (or gut, according to Dr. Axe), I still find the idea of a pickle bed left out for weeks a bit daunting. I was raised on well-done meat and food that hadn't sat out on the counter for over 30-minutes. So I've been experimenting with other ways in which to bring out the flavors of my food without having any go to waste and what has resulted, is a progressive salsa. 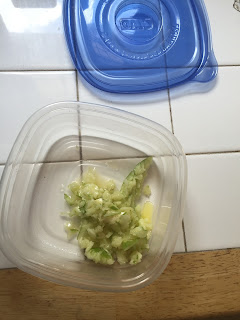 In Candid-dida, I spoke about a greater reliance and acceptance of fruit to satisfy a large sweet tooth. And as I've continued to eat more "natty", I've found myself intrigued by the concept of fruit-based salsas. Indeed, salsa in its common form is generally made of tomatoes which are somewhat of a pseudo-fruit. But mango and pineapple salsas are becoming an increasing favorite as we round the bend into summer. And as I make more salsa, I find I keep adding to it... much like you'd add veggies to a picking bed (to further understand the "pickling bed" you can read Karen Solomon's interview with The Splendid Table here).

Salsa, in the technical sense, is a sauce so it's no wonder I enjoy its creation and, surprisingly, fruit lends itself very well to this process. While specific ingredients vary, my base is often composed of:

Within this framework, l've found fruits such as apples, mangoes, peaches and, obviously, tomatoes, take well to above combination of ingredients. And whereas lime juice is often added to traditional salsas for that extra kick of acid, placing the above ingredients in a blender and pulsing for a few seconds helps to break down the fruit, allowing its own juices to lend an acidic component to the mixture. And, as in Slow Ride, I talked about how time can lend itself to making cooking a "spiritual" experience, time here, seems to lend itself to more robust flavors. The longer each fruit salsa is allowed to sit (in the fridge) the more flavorful it becomes. And as you buy more fruit, feel free to add more to to mixture, adding more salt, oil and peppers to taste. A few unique combinations lie below.

place all ingredients in a blender and pulse until mixed and serve.

So, at this point, I'm going to stop pretending I'm any good at creating recipes and let you reference the one put out by the New York Times... here.

Ditto... get the recipe, here.

So there you have it... a few recipes to make you the coolest guest at the cookout. Enjoy!