Is Eating A State of Mind

I have a very nice set of "in-laws" who allow me to be on their wireless family plan despite the fact I'm not family in the legal sense. But while this cuts down on costs (for all of us) it means I need to be a bit more mindful of my data usage. Once we begin creeping towards that 90% mark, I know I have to fall in line. So, this means I can't stream as many videos, download as many songs or look at as many Facebook posts on a whim. But, at the end of the day, restraint does me some good... mostly in the sense that I don't waste my time on social media. And during those times I really want to sample a song on iTunes or view the Net-A-Porter website (which generally downloads a bunch of images) but abstain, I know I'm gaining resolve not just in the realm of retail therapy but in an overall mellowing towards instant gratification. 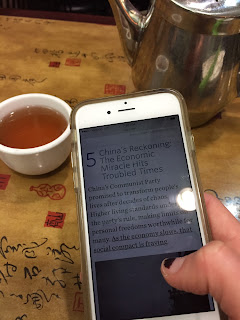 Data usage through the roof.

This "abstaining from the ideal" is also able to be carried into our eating habits. According to Lifehack.org (not the most professional of publications, I know), our brains posses the quality of Neuroplasticity, meaning it carries the ability to "rewire" itself. So basically, you can teach an old brain new tricks, and I've heard (through the grapevine) that when we make decisions that don't jive with our normal schematics, new trails are blazed between our neurons. In short, I believe (because I don't have the time to research) that when we fundamentally abstain from engaging in habits that are personally normal but "harmful" (running the gamut from drinking to data usage) we are able to forge a path which gives us new avenues to what are often greener pastures.

Just recently, I've noticed a lack of reliance on food at all hours of the day. Not that we don't need food consistently for physical sustenance but my emotional reliance on the product has subsided as I've found I have the emotional wherewithal to make difficult choices in alternate areas of life (read: data usage - it's a hard knock life). Either way, I've found that restraint in one area of life can permeate into another. It might be coincidence or it might be unscientific grounds for a blog post. Enjoy!
Posted by Unknown at 6:13 AM