My father once commented that, "you and your brother were super-easy to raise during your teenage years," a comment which I found quite surprising as he always seemed to be mad about something during those times. My twenties (and early thirties) however, have been another story. Perhaps nervous about making my father more upset than he needed to be in my youth, my heyday of "whatthehellamIdoing" crossed with a gross negligence for time management came at a time when I was out of the house and therefore outside the realm of my parents full concern. And while I always felt I would land on my feet, day to day, I would often freak out about where I was going (in the long and short term), what I was doing (in the long and short term) and generally being an asshole to most people because I was scared of not knowing. But, as people do, I'm beginning to settle down... not so much in the typical sense with a family and kids but, as a bit of an introvert, I'm beginning to settle into my inner world where I generally spend most of my time n-e-wayz. And as the other worries I once had begin to evaporate, I'm left with a greater amount of energy to appreciate the smaller and simpler things in life... something that I've missed out on for awhile.

In a post I will ONE DAY publish (it's taking me awhile) I'll reference the phrase, "as within, so without." In my mind, what goes on within us, be it biological or emotional is often reflected in our outer states. In this regard, as my mind calms down, I've noticed things become a bit calmer around me... a circumstance which has ended with a few more plants in my room. So, to make a calmer space, I suggest the following elements. Enjoy! 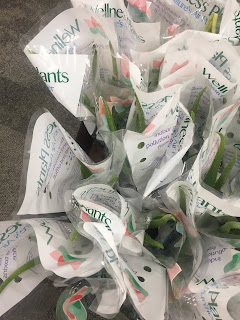 Aloe: Plants generally seemed to be owned by people who are less stressed. Maybe it's a bond with nature or maybe it's the fact that plants in one's space are shown to lead to happiness but, suffice it to say, I didn't have plants in my space for awhile... which left me at a loss as to how to care for them. Enter, aloe. A hearty plant with many medicinal uses, aloe is pretty easy (and cheap) to keep. As a succulent, aloe plants need to be watered about every three weeks. Throw in some sunlight and a stable room temperature and you've got a friend for life so it seems.

Lilies: Having been stabilized by succulents, I've begun moving into flowers... a category of plants more delicate but will die anyways... leaving them a little lower maintenance than your regular household plant. As stated before, with the slight evaporation of stress on my life, I've been left with a slightly greater awareness of my senses. This means I've begun to enjoy some new smells and sounds and at least flowers take care of the former. In this regard, I've begun to pick up lilies at the store as they're sold in a "budget bunch." Lending a somewhat strong scent to one's environment, lilies are best placed in a wide opened space and bought before full bloom. Just don't give them to a friend as they represent death.

Water Fountain: Back when I was in high school, my father had set up a space devoted to his meditation practice. There were Buddhist statues and paintings and I noticed that my friends would often wander in much to my mortification. But one thing he had in there that I did enjoy was a small water fountain. You could plug it in and the water would runeth over small rocks... making a peaceful sound and thereby environment. And as I've noticed a need for more calm in my life, I've thought about purchasing a small fountain and sitting back like I did in the day and just relaxing. If you're in the market for a fountain, a few good ones reside here. Or, if you want to sit back and kick it old-school, there's always music...

Electric Relaxation.
Posted by Eating Natty at 7:12 AM