The "Chakra Series" is an idea I've wanted to write about for a long time. I think it began two summers ago when I first delved into the world of chakras, recalling their existence from some corner of my memory and bringing them into full focus while anchored by the boredom of a mostly solitary season. Within the field of yoga, one comes to notice that a lot of what is being worked and stretched is the "body" proper... not so much the extremities that might be strengthened in the process of running or weightlifting but the actual parts of ourselves that wrap around our spines... our backs, our sides, décolletage or whatever. And as yoga sometimes draws from the Ayurvedic tradition, it are these general areas that relate to each of the seven chakras.

A chakra, in Ayurvedic medicine, is essentially a, "center of energy". Beginning at the base of the spine and traveling up through the crown, each chakra corresponds to different needs, different struggles and different yoga poses said to help in its mastery. Through the "chakra series" I hope to talk about each chakra as well as related yoga poses which could help either emotionally or physically in dealing with our centers of energy. So, beginning next week, I'll put up my first post of the series and hope that, as always, you enjoy! 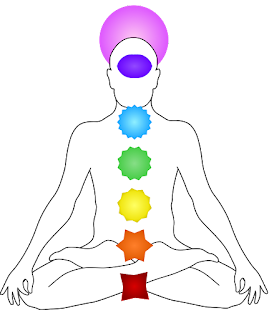