When I was young, my grandfather claimed to have completed his Bar Mitzvah in three, separate languages... a fact which left me thoroughly impressed. There was Hebrew, which was pretty standard fare for any Bar or Bat Mitzvah before we all went soft and let kids preform their Torah readings in English. There was German in order to incorporate the linguistic necessities of his extended family. And there was Yiddish. What I didn't realize at the time is that Yiddish is really not a language in and of itself but a more colloquial form of speaking that basically utilizes aspects of both German and Hebrew. Of course, once I found this out, I felt a bit cheated out of my earlier amazement. But, to his credit, my grandfather was a great Yiddish speaker. We didn't have dirt on our faces when we came in from playing, we had schmutz. We were never acting crazy as kids, we were acting mshuge (pronounced: meh-shug like the Suge in Suge Knight). And as I grew older, I came to enjoy my grandfather's use of Yiddish as both a cultural and endearing act. One such word used by both my grandfather and the general population is putz. As a noun, a putz is someone who is rather clumsy but act of putz-ing means something a bit different. To putz, as we all know, is to putter, tinker or do something of little consequence that occupies our time and generally brings us enjoyment. However, as the long winter months approach us, I've found, ironically, that putzing with our routines can lead to big changes... particularly when the cold weather leads to bad habits...

We all putz from time to time, engaging in small tasks to occupy ourselves either as a distraction or form of relaxation but putzing with our bad habits, particularly during the winter months, can be something necessary for good health and a sense of well-being. Because... it's easy to eat poorly in the U.S. but especially so in winter. Whether it be holiday parties or a simple fire that roars in our stomachs during the colder months, it's easy to go down a path that makes us feel shitty if we're not careful. This is not to say excess doesn't have its place. Indeed, a little holiday cheer is needed but I find my body sometimes yearns to get back on track and not fed fudge for eighteen hours straight. So, herein lies a few tricks I've picked up to restabilize my body (and mind) when needed. Think of them as Christmas gifts to yourself and, enjoy!

Bone Broth: Within the past year, bone broth made a pronounced appearance on the "foodie" radar. Publicized last year for its healing effects on the gut and delivery of collagen to our skin, bone broth recipes were touted on distinguished sources from Hemsley + Hemsley to The Splendid Table. But I didn't come around to the idea of bone broth until I thought it could be used as a remedy for my dry skin.

Thanks to family, I have a severe bout of dry skin in the winter. Cracked hands, heels and lips make for a relatively uncomfortable season although excessive sweating and oil in the summer never really make it to be a good time to be in my own skin. ;) However, after doing a bit of analysis on my diet, I thought (like cancer) genetics might not be the entire culprit and that I could do more on my own to resolve my issue.

As I learned and touted in Candid-dida, food plays a large role in how we feel and to some extent, as I noticed my mood swings and anxiety decrease in proportion to my sugar intake, I began to think (in a novel stroke of genius) that such sugars didn't provide adequate moisture or essential oils in my body's system to keep me going through the winter months. What was missing from my diet, I noticed, was meats and good fats that could do the trick of keeping my body warm and comfortable on a cold day. So, after coming across a delicious broth recipe made with beef bones (used as a base for pho in this circumstance), I've started making a (crock)pot of broth each week, throwing everything from veggies and beans to airline peanuts in the soup when needed. To make, simply follow the "broth" portion of the recipe in the link above.

Even Venetians "mask" in winter.

Masking: Sometimes, doing something uber-luxurious (if not cheap) can help to pull our routines out of a rut and onto a more stable course (hey, there's a reason why masked events like Carnivale and Mardi Gras fall in winter, right?). Within the season, facial masks are a great way to over compensate for the lethargy that can befall a beauty routine when we'd rather spend our extra minutes in bed, And masks can be a fun thing to experiment with given our variety of skin types and needs of the season. If you do in fact want to go uber-luxurious (and ceremonial) May Lindstrom makes a well-regarded mask entitled "The Problem Solver" and also sells a Facial Treatment Brush and Masque Treatment Bowl for "superior" application. However, if you're like me, you might want to put a less expensive mask in the (reusable) bowl and apply it with the (reusable) brush 'cause eff expensive things that run out. In winter, Greek-yogurt can serve as a great hydrating mask in a pinch but, if you're looking for something a little more "middle-of-the-road" Into the Gloss has developed a comprehensive, hydrating list here.

"Spring" Clean By Candlelight: If bone broth was all the rage in 2016, the Danish idea of Hygge seems to be trending for the subsequent year. Defined as a somewhat intangible form of coziness, methods for generating hygge have been developed in Nordic countries for decades (i.e. "when it's cold out, stay indoors and light a fire" according to the Financial Times). However, as I can be a bit of a putz and don't like to generally be around fires I'm responsible for, I find cleaning provides a subtle coziness even if only serving as a way to rest the eyes from clutter. 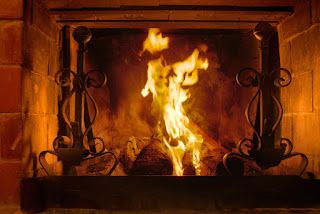 We spend more time indoors in winter so why no make the area as hospitable as possible? For me, cleaning presents a "double-whammy" of both comfort and accomplishment. Having cleaned my bathroom for the first time since 2011 (yup), I noticed how comfortable I felt being in the space and how I looked forward to winding down in the evening with a warm shower and, of course, facial mask. Also, while winter ruts can happen, cleaning even the smallest of spaces presents us with a feeling of accomplishment which can boost our moods and confidence. And if you choose to clean by candlelight to generate some hygge, all the better. According to the Financial Times, hygge, at its core, is a set of common sense practices for the colder months. When it's cold, light a fire and to keep yourself from cabin fever... clean your cabin.

Help Out: No matter which season of the year we experience, helping out is a universal ticket to feeling better. And while we may experience our individual ruts, helping to pull someone out of his or her's almost always balances the scale so that both parties land on higher ground. As the old saying goes, "a candle does not lose its flame by lighting another candle." It only generates more hygge.

Recently, I came across an article on the capture of Anne Frank (the Anne Frank House does not think her family's discovery was due to a hard-and-fast betrayal as otherwise thought) and was hit square in the face with the notion that, we do live in a time when we can do things to make life better for others. For me, I've been trying to think of ways to help those in Aleppo and it's difficult when issues seem bigger than your small world but, as it turned out, there was a small fundraiser for Aleppo at a burger joint by me. Like cleaning and/or putzing acts of help can be small but have profound effects.

So there you have it, a few ways to putz around with your routine to make winter a happier, healthier time for all. Happy Holidays. Happy hygge. Happy happy.