I grew up with a father who is vegetarian. Watching someone eat no meat while harboring my own love of vegetables has generally led to a lack of protein in my diet. This fact has become more apparent as I age and realize that, while I eat a lot of vegetables, Little Debbie won't adequately sustain the rest of my diet. To this extent, I have started to eat a lot of beans for protein. I remember my dad opening a can of beans each night and "dousing" a bottle of Tabasco Sauce over it. But why keep things easy and straightforward? I...have been making hummus.

Full disclosure, I like soft foods. I'm not talking about foods that are naturally soft, I'm talking about foods that are boiled, blended and can be eaten with a spoon. I'll essentially eat any soup and, for some reason, I love dips. It may be due to childhood memories of having dips at parties because for me, dips evoke a feeling of excitement (plus, they fit into my "soft foods" category). One dip I particularly enjoy is hummus. I used to eat hummus a lot in high school, the kind that came in the big, plastic tub. As my father was vegetarian, we kept it as a staple in the fridge and, like dip, hummus still evokes fond memories. As I age, however, I've veered  away from store-bought hummus and have begun to make my own. The benefits of this process have been two-fold. First, making hummus dip from scratch has saved some coin and second, while many store-bought brands are healthy, homemade hummus can be healthier. This last point has become evident in my realization that homemade hummus contains many nutrients I miss through my primary consumption of vegetables. It is essentially my "all in one" dish which calls for ingredients containing protein, calcium and Omega-3's to name a few. Thus, below lies the ingredients put into homemade hummus and their benefits. 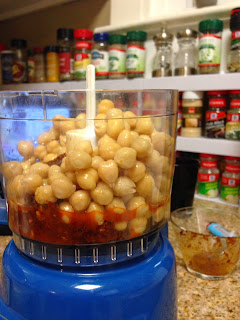 Beans and Pulses: Essentially, hummus is a simple mixture of beans, tahini and lemon juice (with maybe some garlic and seasonings). While beans (or legumes) may be the operative ingredient, there is no rule stating the types of legume you have to use. Pinto and adzuki beans, for example, rank high on the ANDI (aggregate nutrient density score) scale with lentil, kidney and black beans following close behind. (You can find Whole Food's comprehensive ANDI guide here). While chickpeas fall lowest on the ANDI scale (holding thirty-one points less than pinto beans at 55) they are the predominant bean with which hummus is made. If you care about the presentation of your hummus (let's say you plan to serve it at your next shindig) chickpeas may be the best bean to use. The light color and creamy texture of chickpeas makes it more visually appealing than a dark green lentil but, hey, do you.

Note: In addition to Feed Me Dearly, Into the Gloss has become another one of my favorite blog sites. This week, ITG featured an article on Japanese, homemade beauty remedies which cited ground adzuki beans as an exfoliant. If you buy them for your hummus, you may get an added bonus towards your beauty routine.

(Chicken Feet) Stock: Stock, of any kind, is not a common ingredient in hummus. You may not see it in any recipe for hummus that exists. However, if you choose to go the dried bean route, stock (of any kind) can be a great addition. When I was young, I loved reading "Watch Out for the Chicken Feet in Your Soup." Written and illustrated by Tomie de Paola (who also did Strega Nona), I was probably more intrigued by the use of bold colors and interesting illustrations of an Italian grandmother's home than I was with the actual story but I always found the use of chicken feet in soup rather esoteric and alluring... something I couldn't quite gain access to or understand. Some twenty-five years later, however, I got my chance at chicken feet soup.

Having gone to the butcher to pick up some (hopefully free) beef bones, the butcher directed me towards a freezer filled with frozen bones and specifically pointed me towards the chicken feet claiming that it made a great, gelatinous soup stock. Having remembered an article featured on Goop which cited the benefits of gelatin (from bones) on the skin, I snatched up a pack and brought it home. My new toy in the kitchen is my slow cooker. While this device might sit in the back of most cooks' shelves, suffering from overuse, it has become my culinary life saver. Not wanting to keep stocks boiling on the stove while I run to the store or keep beans cooking while I go to work, I simply throw them in the slow cooker overnight. I just bought All-Clad's 4-qt Slow Cooker and I love it. More to the point though, if you choose to use dried beans as the base for your hummus (they have less salt than the canned variety) cooking them in stock (in your slow cooker) can be a flavorful (if not vegetarian) advantage. For my "chicken-feet" stock, I simply threw the defrosted feet in my cooker, added salt and bay leaves, then covered it with water and cooked overnight. Gelatinous and delizioso. 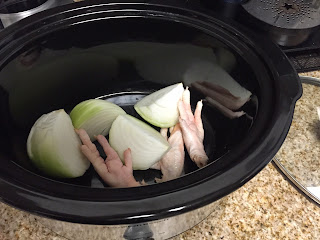 Sesame Seeds: Behind beans, tahini is the second most important ingredient used in the production of hummus. A paste made of sesame seeds and olive oil, tahini can often be expensive when purchased in the grocery store. Therefore, I tend to buy my sesame seeds whole from amazon, toast them in a skillet and blend them with olive oil. For someone who doesn't have a lot of dairy in her diet, I learned (happily) that sesame seeds contain a high amount of calcium as well as zinc and magnesium (which is an "anti-cancer compound). In fact, to see the entire list of the seed's benefits, click here. When it comes to hummus, 1 cup of sesame seeds will typically yield 1/2 cup of tahini when blended with olive oil. More on this below.

Olive Oil: I need more olive oil in my life. As a youngster, I remember my dad (the vegetarian) consume a spoonful of the liquid each day to access monounsaturated fat in some form. While I've always loved olives, I've never been keen on the taste of the oil they produce. However, the benefits of olive oil on one's health and beauty routine are unavoidable. At this point, it seems as though every beauty site talks about olive oil for the hair or to use in an oil cleanse, which is great. Olive oil is often cheaper than other (healthy) oils as long as you're aware of the brand you're buying (for more on this topic, my former post Tuscan Tea focused on some scandal in the oil industry). Olive oil also possesses a substantial amount of anti-oxidants and acts as an agent for calcium absorption making it a good companion for our calcium-rich sesame seeds. Specifically, when used in combination with 1 cup of sesame seeds to make tahini, 2 tablespoons of olive oil will generally suffice.

Chilies: I'm a huge fan of chilies in all forms. I often buy them dried for preservation purposes but also like to buy them fresh and pickle them. I always put them in hummus. Oftentimes, I cut the tops and then scrape the seeds from two dried chilies before placing them in hot water for twenty minutes. When it's time to blend the hummus into a silky, smooth concoction, I throw the soft peppers into the blender with everything else. Adding chilies to one's hummus not only adds extra flavor to what can sometimes fall on the bland side if using dried beans (remember to add salt to your stock!) it also relays a myriad of benefits to our bodies. Like leafy greens such as kale and spinach, chilies provide a wallop of vitamin C to whoever consumes it. Its been shown to help in digestion can also help activate your metabolism. WOOT WOOT.

So there you have it: an all-in-one recipe that contains extensive benefits in a single dish. To make the hummus, I often soak dried beans overnight, (again, any type of bean is fine) then place them in a dutch oven and cover them with stock (again, any type of stock is fine). After bringing the stock to a boil, I let the beans simmer until soft (about and hour and a half). While the beans are cooking, I toast 1 cup of sesame seeds in a pan over low heat, often throwing some cumin and coriander seeds in for good measure. Once the seeds begin to give of an aroma, I place them in a blender with 2 tablespoons of olive oil and blend to a paste. Likewise, while the beans are still cooking (this is the most boring part of the process) I bring a separate pot of water to a boil. Once boiling, I turn off the heat and add two dried, de-seeded and de-stemmed chilies and let them soak for 20 minutes. When the beans are ready, I throw them into the blender with the chilies and tahini and blend 'till smooth. You may have noticed I use only blenders cause food processors stink. My one question that remains once the hummus is complete is that, after making a dish with so much effort and with so many benefits... why am I eating them with Tostitos?